Went out this evening to move a few horses around . Dandy , and his new pen mate ,the long suffering FV Wild Card (Wilder is the sweetest guy, never chases or challenges the young ones , but he will tell them when enough is enough) 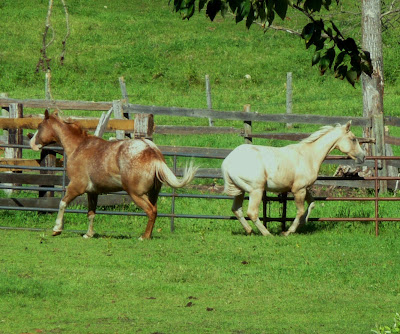 Anyhow , we didn't move them , but the got the wind up when the girls were moved! 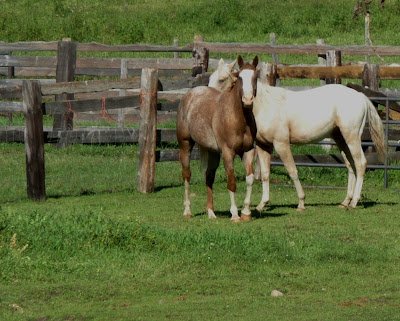 As you can see Dandy is growing up to be a big boy! Wilder is a 6 yr old and a fair sized guy at just around 15 hh.Dandy is not as tall as the pictures lead you to believe , but not as far behind Wilder as you would expect for a yearling.I will have to actually measure him  soon and see where he is going to finish up. I had thought around 15hh but... 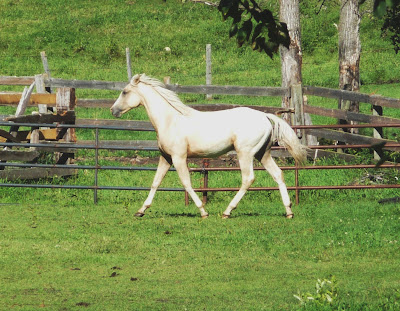 He is a good looking boy though! Hard to get good photos of him when the sun is shining , his white is sooo white and there is so much of it , his golden coloring washes out in the pics .Tried to change the contrast a bit , but I am not so sure I like the result . Have to catch him on a cloudy day (not too soon please for the sake of the hay) 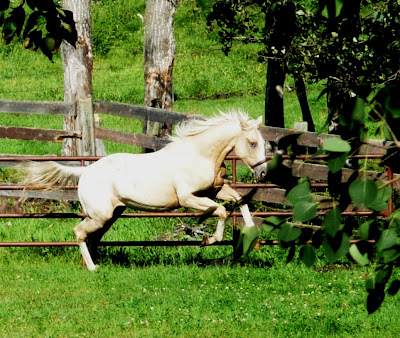 All jacked up and showing off his power takeoff 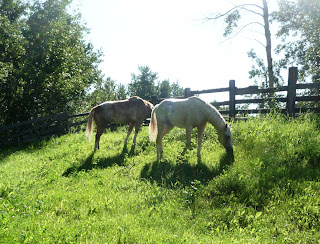 Shows over ,time for some grub
Dandy is for sale and as you can see  well recovered from  his gelding surgery .Kid's got nothing to do  right now but grow , and he is doing a dandy job of it !
Stay safe everyone
Posted by Sherry Sikstrom at 8:46 pm

He sure is looking good!

He is gorgeous!! I love him.

They look good.......nothing wrong with those pic's.

He's a dandy, all right! always love the pictures!

He's sure a little power house, isn't he? Only maybe nix the 'little' part in that statement...

He's going to be one tough horse to beat in competition. Looks like he could go just about any direction or even all of them- nice all around horses are few and far between. He sure is a Dandy!

He's a good looking guy! I really like the 3rd photo of Dandy.

Dandy is doing a dandy of a job growing, love it!

Dandy is a really good name for him....cause he is. I liked your Returning To Full Bloom, you are so right about looking back. Your kittens are toooo cute a couple of those look like my new ones.

Whewwww! What a looker! I don't forsee him standing in your pens for long fern.


Wilder is nothing to sneeze at either. Good looking ponies abound at your place.

Wilder is a handsome fella!
And Dandy...wow, he sure has taken off growing. I bet he'll be 15'3hh.
I love those 3rd and 4th photos of him. His coloring reminds me of a lightly toasted marshmallow. lol!

Dandy is so well named. Hope he finds his person soon!

love his "jacked up" photo, look at that gorgeous color! and I'm envious of all the green grass you have!

Thanks all, I am pretty prpoud of them both