First of all , thanks so much for all of your kind words,thoughts and prayers for my mom.Long story short, it appeared she had suffered another stroke, but also she has a shunt to drain fluid  from her brain , an injury as a result of a case of meningitis several years ago, and there is a chance that the shunt may be failing (they are only meant to last 5-10 yrs and this one is well past that) . They are still trying to  diagnose exactly what is going on . So she is still in hospital, not happy about it , but is the best for now to allow the doctors to properly investigate and treat the problem. Mom has had years of health struggles, and is one tough little lady .Surviving a fairly risky liver transplant surgery over 23 yrs ago(and is apparently Canada's longest surviving liver transplant patient!

On to other things , I stayed home today ,several added trips to the city the past few days  have me a little worn down.
Puttered around doing a bit of housework, then had a visit from Deb, and Cara(Another honorary niece) Chatted for a while , then went for a walk , very hot for us here today ,so it was a pretty low key  kind of walk.Debs neighbor had given her some apples to use up so we went down to see if any of the boys were interested .I did video them running in to see us , but my hands must have been shaky because the video is pretty poor.Next time ! 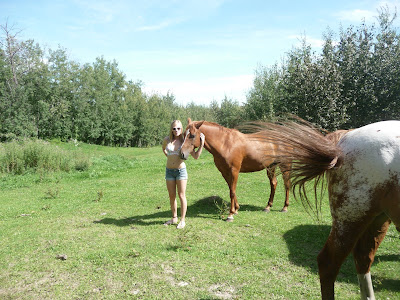 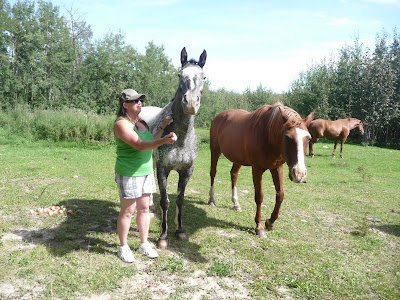 Deb and her beloved Blue
﻿ 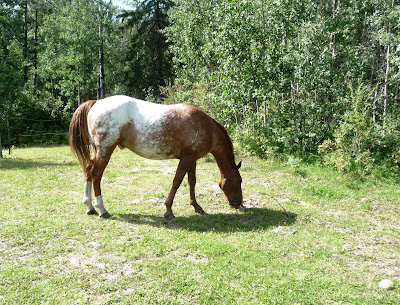 And of course my  guy Johnnie ! The all had a taste of apple , some more than others . Johnnie as you see ,is not one to miss a treat and is sporting some very fresh "apple breath "
Then on to the mares ,and babies. most were uninterested , till Ici had a bite , then Jazzy and Rich thought they should have another try 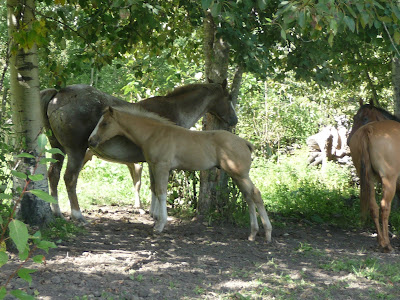 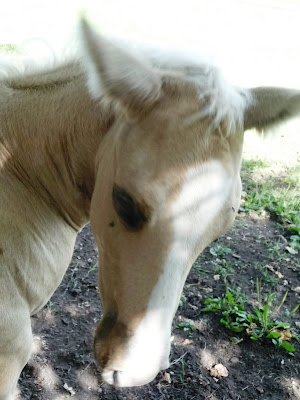 Comet is becoming a fan of having scratches when he sees me ,not quite as friendly as Quinn yet, but it is coming He is only just now beginning to lose his baby coat , it has faded some and in the right light looks almost like spun gold! cant wait to see what color he comes in with later 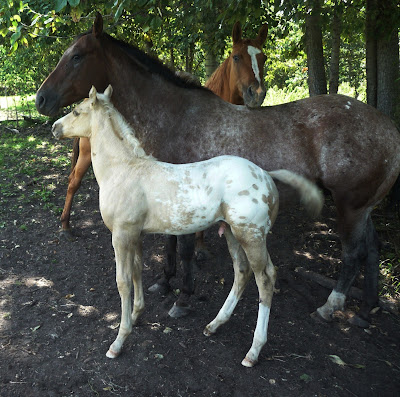 ﻿
I was on the phone when they went to see these girls , but I understand apple were not their "thing" Well not until I went down later and was eating one ! (Deb Peps prefers very small dainty pieces of apple to be hand fed to her if you please! ) 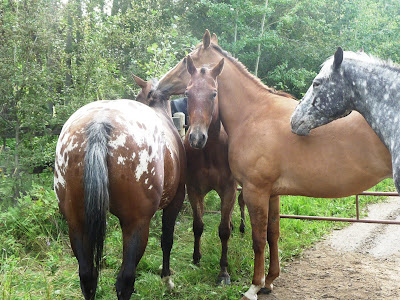 Hot as it was it was a bit buggy so the girls were using each other as scratching posts and flyswatters
Andee here is looking like the peanut butter between 2 chocolate chips! 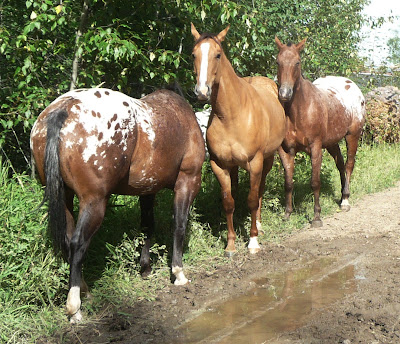 Finally on to Dandy , who had been playing quite a bit with Wilder , helps though ,his color shows better when he is sweaty! 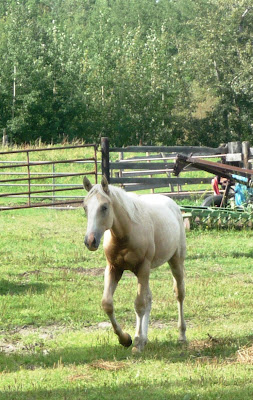 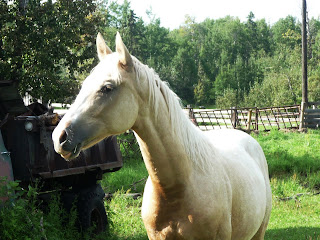 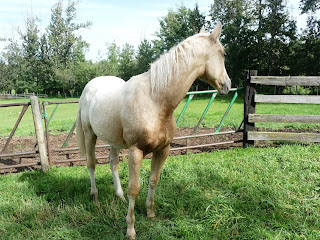 But I would like to go see those pretty girls K??
Other than that, filled waters , did some edging on the lawn, and ran (drove ) back and forth to the field delivering cold water, bale string, popsicles etc to the guys while they were baling hay .Finished up the housekeeping in the later part of the day then had BBq burers ,hot dogs and corn on the cob with Martin,  my sister Heather, brother in law Marc, and nephew Brendan(who is nicely recovering  from sinus surgery last week)  A nice way to wrap up the day
Hope everyone had a good weekend
Stay safe!
Posted by Sherry Sikstrom at 10:32 pm

gosh it does sound hot over your way ....hope your mum is doing ok.Makes for a tough time for you though so take care!!!!. Just love the peanut butter between chocolate chips. What a gorgeous photo - as were the rest.

Sending best wishes for your mom - my mom also had a shunt, and it did fail and have to be replaced.

Love all your pictures!

Lookit Quinn's spots, they weren't so noticeable before, were they?

Thanks for taking the time to post, so we can enjoy your beautiful place too.

Prayer for you and your Mom. I do love looking at your beautiful horses. I'm so jealous of all the spots, my app is solid.

Sounds like a great way to spend your weekend with family and horses, Awesome photos ! I pray for you and your mum.

I love the uniqueness...(is that a word...well if not it is now)of your horses,the different colors are very interesting....and all that hair.I hope things are ok with your Mom she does sound like a toughie.
PS: Love the shot of Winston.

Prayers and a blessing for your mom, she sounds like she is a tough one (must have ribbed off on her daughter.
Thanks for the tour of your herd, they are all looking fabulous. I really like Comet, he's a beauty, looks like he has his mom's pretty head and he sure is built! The girls look great too, are Cat and Andee going to Ernie's this fall?

I hope that your mom gets much better and fast! How awesome is it that she's such a strong surviving lady! Prayers for her and you both!

And I've never tried to feed my horses apples...

Wow, you've been busy busy. Sending best wishes for your mom, what an amazing lady! Your horses look so gorgeous, love all those spots :)

You said you took it easy, but it still sounds like you didn't! lol

Maybe one of these days you will find the time to sit around and do a fair bit of NOTHING.... slim chance, I know.

Beautiful pics of all the horses!! Will send prayers your way for your mom...sure hope she's back home soon.

Your mom sounds like a strong woman. I'm pulling for her over here.

I do wish you didn't mention peanut butter and chocolate chips. Now I have to go rummage around in the kitchen to look for some. Yum.

Enjoyed the updates and especially the pics of those spotted Apps! I just love them all - the babies are beautiful.. fun to watch them grow. Saying some prayers for your mom.... take care!

It was a nice short visit yesterday. Good to see you and get a chance to see my ponies. Good to hear your Mom is doing better and that maybe they have found the cause for this last bout. Our thoughts are with her and your family and I'm sure she'll be home soon. After visiting with my boy blue, I think it is time. Looking at the end of the month. Thnaks for the nice picture. Take care.

Such lovelies you have. EVERY single one of them.

Hope your mom gets well soon. Sounds like she is a tough little lady. Hugs to you to, I'm sure this is wearing and stressful.

Hope your mom is healing up soon, no fun to spend time in the hospital.

Sure looks good at your place, was hot here the last couple days as well.

Hope your mom is on the mend soon!!! I love your photos~ all those spots! Drooling! ;-)
Hope you are having a great week!

And always...you have the most gorgeous pictures of your most beautiful babies!!

Hi Aunty Sherry! Send my best wishes onto your mom for me!! Glad to see everyone is fat, sassy, and doing well!

What is it about horses and apples? Apache can live without apples, too. Carrots are her thing.

Comet is gorgeous! I just love him!

Thanks for sharing all these great photos and I hope your Mom continues to improve.