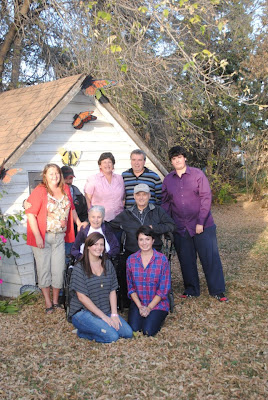 Hang in this is going to be a long one !
Martin was home for his 7 days off, starting Tues of last week. As per usual , this time of year , "days off " hardly describes it . He was rushing around trying to get things sorted out to move the cabin. He , dad, and brother in law Marc , put in a day or  two fixing equipment.Yay ! the Versatile(Front end loader ) is up and running again!!!! we sure miss it when it is broke down. We have other tractors, with loaders , but that one is as my dad would call it "a great rig!"
While the guys were busy at that , I was working , then on my "off time" I was cleaning stalls getting ready to wean the babies. The stalls got left empty , but not properly cleaned out  over the summer and it was a mess! Deb helped me as well on Saturday doing the cleaning .Fresh bedding , and scrubbed buckets , and we were ready! . I also got to play electricians helper to nephew Cory , who was fixing a few lights and the power box on one waterer. And Welders helper to Dad who came out to weld the squeeze for tagging calves .
Sunday morning Deb , came over and we caught up the mares , led them and babies into the barn. then quickly slipped the mommas back out cranked the radio and closed the door! For the most part , that was it , Rich has been through this program enough she just sighs and wanders off. Ici, called a bit , and also settled quite quickly . The babies fussed here and there , but with the radio they cannot hear mom calling back so they too settle quickly . But Jazz, the mare without a foal, well she went plumb crazy!!!! Dashing around and calling like she had lost her best friend! Funny old girl , she really missed the little ones . Her dam was similar , actually worse , even when she had no foal and was in a completely different pasture than the babies, she seems to sense weaning day , and would call and squeal running the fences for a whole day in sympathy I guess, and when we weaned a foal of hers? Well lets just say I have still not recovered from that sleep deficit ! 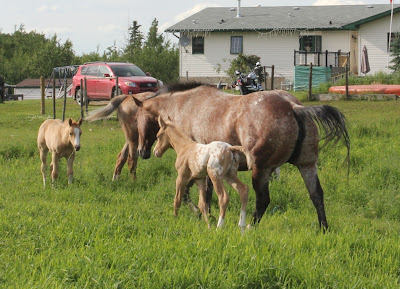 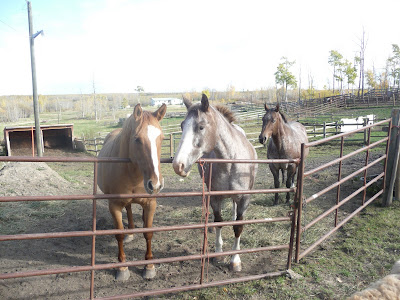 Jazz is the dun mare on the left ,Rich,centre Ici back and on the right . Settled down by the time this pic was taken . Quinn set right to drinking and eating well, with no hesitation, but Comet had me watching for a bit . It usually goes well doing things this way , they already are eating hay and have a taste for grain. Also are drinking water long before I wean ,but the odd one pouts a bit . I am vigilant until I see "water going in and poop coming out " the feed not so much of an issue , though I do watch , but without water ... 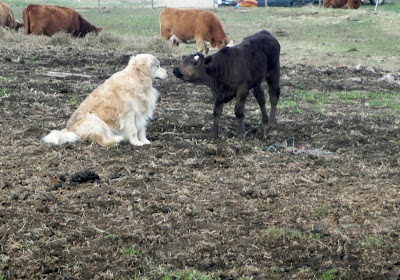 This weekend was also the one we weaned and shipped calves . There was an Angus influenced pre sort sale today that we wanted to catch , as the next one is not till mid Nov and Martin will not be home . So I went out with him to bring the herd in Sunday .
you may remember a few of these
The heifer Winston "whispered" 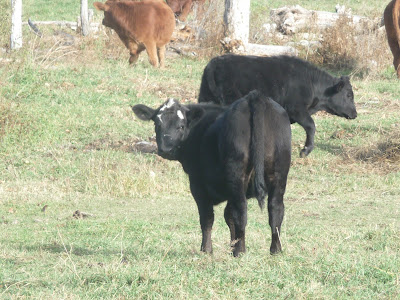 And who could forget Elusive Louie, the magical disappearing attack calf! 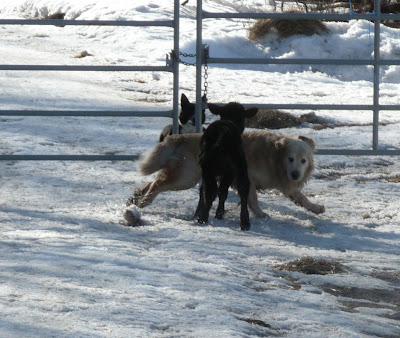 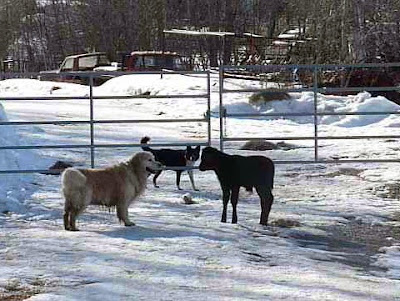 As you can see they have grown well ﻿ 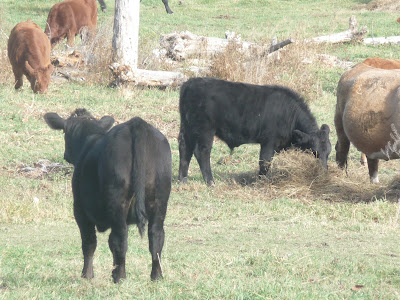 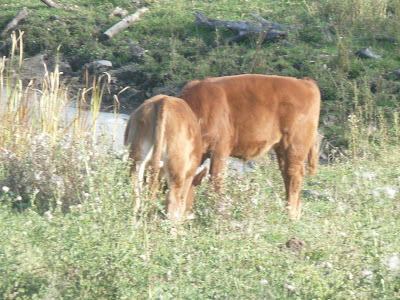 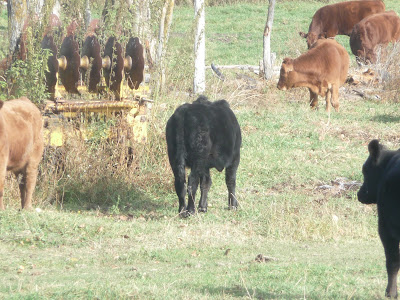 Out at 7 am to bring them in . Martin and I and the dogs did that part .Then we were joined by Marc and Deb , to help sort and tag. We have just a tiny herd so it really doesn't take long . Marc  reminded me of the days a few years back when we ran 120 through in a morning before the truck, not just 20!
It goes pretty much the same whatever the numbers , sometime just a little quicker .
Truck was there at 1pm, I had gone in to clean up, and whip up some mashed potatoes for my contribution to Thanksgiving dinner , then .we headed for town!
A wonderful dinner at my parents home . The dinner was a group effort , Brendan made the turkey , Dee, mashed turnip ,and cauliflower with cheese sauce , Tara , stuffing . Heather , 3 different kinds of pie, I did the mashed taters and made the gravy. It was very nice , and I must say The kids did a brilliant job! the food was wonderful!!
Mom was out on a pass for the day from hospital as well . Yup our prayers are always answered , and sometimes...it is YES!
Deanna , let us know to try to dress nicely for the event ,as she wanted to take some family photos . She has a plan for these ,but I am not to tell. I also wanted a new one of Martin and I for our Christmas card .I think we got some nice ones,Thanks to Dee I am guessing you know this couple 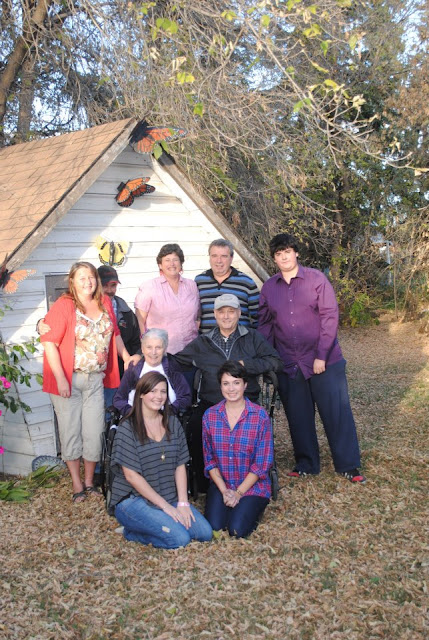 The whole fam
The pictures were taken in mom and dads back yard, near the playhouse Heather and I shared as kids 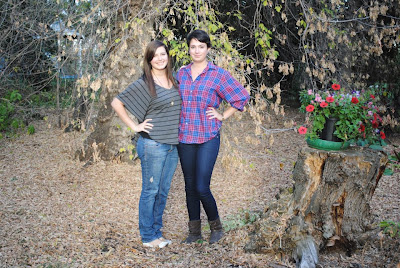 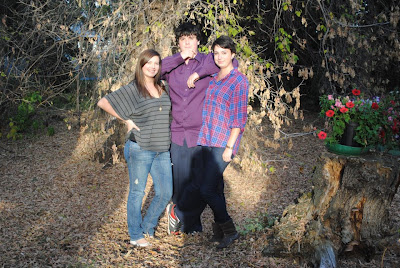 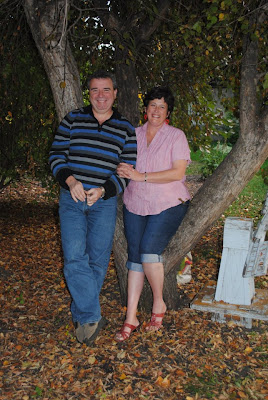 Marc and Heather (My sister and brother in law) 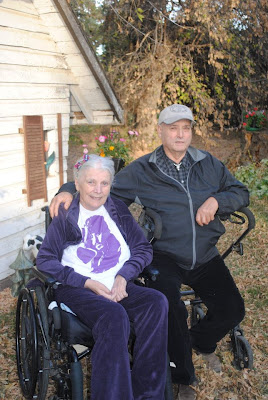 And of course Mom and Dad .
Martin has returned to work today . It seems like his time at home was a warp speed blur. But we got lots done, and next time , maybe it will be calmer ! Meanwhile, I sure hope the cows settle soon I can't hear myself think!!!
Stay safe!
Posted by Sherry Sikstrom at 10:09 pm

Great pics! You've been busy!!
Beware what u wish for, I might send Mercy up there, but she'd fall in love with those appys! She LOVES them, lol.

What great pictures, love the one of you and Martin, you look gorgeous!

Love the family pics, your Mom looks great! dad too!

Ah, the photos are brilliant. Special to have that one of Mom & Dad. Your photo with you and Martin is fantastic! Such a pretty time of year to have pictures taken outside.

Whew! You guys have been busy. Glad you fit a Thanksgiving meal in there to give you some time to relax!

Hope the time passes quickly with Martin gone and soon enough he will be home again....and maybe you guys will be able to relax a bit next time! :)

Wonderful photos. WOW you have been a busy bees . Glad your mom was able to join you all for thanksgiving. Have a wonderful day !

I love Winston! You ever decide he needs a new home, you just ship him to MO :)

And that's a great way to wean babies... blaring the music. I'm not sure I'd have thought of that.

A busy, happy week! Nice to have Thanksgiving with all the family.

Wow sure is busy up there, we are weaning our calves in a couple weeks, and hopefully my foal next week.

Sure like the pic of you two, looks good!

Had fun chasing those cows. Although I seemed energetic and possessed, I really felt it later. Haven't run that quick in a long time. Nothing like fresh air, exercise and a little attitude to help the soul and the body. Glad you had a nice day with your family. Everyone looks so happy. Thanks for letting me be part of your "family".

Glad weaning went well, then everything else too. The food sounds good and if there were any leftovers...

Love the pics and can't wait to hear what the project with them will be.

Talk about busy! You made my head spin and then you threw in those nasty snow pic's;)))

Well girl, you've been quite the busy little beaver haven't you???

I loved flippin' through your gorgeous pictures!

God bless ya and have a magnificent day sweetie!!! :o)

Glad you got to relax, and get the family together after all that hard work! Wonderful pic of you & Martin!! You have the same sweet smile/face as your mom.

I'm glad the weaning went well, your Mom was able to come home at least for a while, your enjoyed some wonderful family time, and got so much done. My head is reeling reading your post, but I enjoyed all the sweet photos and family stories. And my! what a huge delicious dinner you all shared. Sounds like a traditional US Thanksgiving meal! lol!

Thank you for all the compliments you are so kind