And now for the words

So yesterdays post was wordless for a couple of reasons.First and foremost I figured the boys could carry the post on good looks alone , secondly ,I was struggling with a headache.Well the headache  came and went all evening , and was apparently a warning of things to come . Suffice to say this morning sucked! big time ! I have not been that ill in a long time. We are talking the kind of sick ,where it doesn't matter how old you are , you just want your mommy!
Got chores done  then went back to bed until noonish . Finally was able to keep some chicken soup down(you know the kind , with zero food value, has never been in the vicinity of a chicken , or a vegetable for that matter) Figured it was a cheap easy thing and I wasn't wasting good food if it went wrong .
Still a little shaky all day so I pretty much laid low, I did go out for a walk and helped my BIL tow a truck out of the way of feeding , and watered the mares ,did afternoon chore a little early (and a little slow ) and got a few more pics of the "kids" 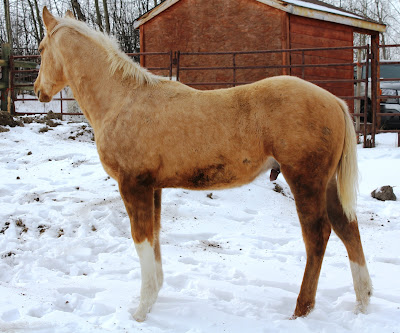 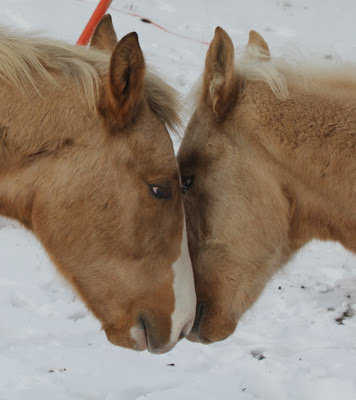 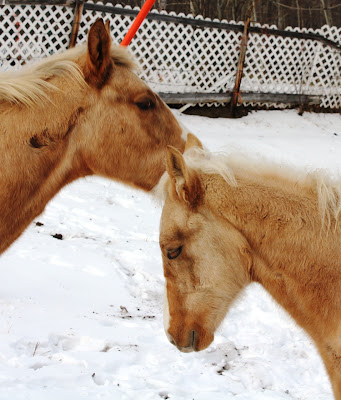 (Tell you a secret) 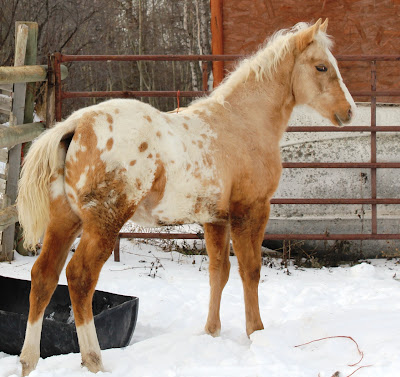 They have settled well, but last night was a little exciting with Quinn jumping out of the pen over a 3 rail fence I might add!Quinn was the wild child of the day actually , when I went to take them out ,it was quite windy ,so Deb was holding the gate , and Brian wound up laying over the tarp on Phoenix's bales to stop it from spooking them. Comet came out quite well on the lead , a little hesitant , but good. Quinn on the other hand ,was pretty sure I was leading him to slaughter! took  two tries to get out of the barn and then when we were almost to the gate , he bolted and took off ! straight back into the barn , and into Comets stall , then out of there and into his own! (So wish I could have got that on film! ) Three times is the charm though and he led out fairly well and into the pen. As you saw from the pics I let them rip around a bit then caught them up , took off the halters and put them in the new pen .This evening , after some turnout time they are well settled and munching in their new quarters .
Was going to work on Christmas decorations outside and do some housecleaning ,but well the way I feel the dust bunnies will live to fight another day , and the lights will have to wait too!
Before I sign off, I wanted to let you know to check out Ride a Good Horse , and Own A Morgan  blogs .Both have posted some great ideas for Christmas gifts  made by fellow bloggers!
Stay safe and warm everyone!
Posted by Sherry Sikstrom at 5:32 pm

Glad you're feeling a bit better - that must have been awful. Thanks for the baby pics!

They sure are looking good! Sounds like some excitement was going on there yesterday.

Hope you get feeling better quickly too.

Glad you're feeling better. Love your babies. Mercy always wants to see them. She gasped at tonight's pictures, she's very in love. It's a good thing you're far away, or she'd be at your place night and day.

Mikey , she would be more than welcome

Oh you poor thing, and yet ya still did work , take it easy relax some and get better fast ! Awesome photos such pretty ponies ! Try to have a restful evening !

Sorry to hear you aren't feeling well. Rest up and get better. Love the second closeup photo, with their two heads together. So sweet!

Sorry you don't feel well,it sucks ....having to traipse around out in the cold when you're sick. Hope you feel better soon. Those youngsters are beautiful ...I think I'm falling for Comet.It's good I live far away......cause I really don't need another horse.

Poor you! I'm so sorry you were hit by something awful! I'm glad you're feeling better now, though.

Glad you are feeling better. Mighty fine looking youngsters there!

Quinn be a jumpin' harse... MAN, he's one handsome dude! Love Comet too, but WOW, Quinn!
Overly enthusiastic can be a good thing:)

Many of us wish we could be there to help!
Ya know, ONTARIO is short on great horses...
(hint, hint, hint)
JOHNNIE sent me a note saying as much..

Quinn sure is built nice. That first photo is a nice conformation shot. I'm really looking forward to having two foals next year; the entertainment will be endless. Keep those good photos coming, these ones are looking like contenders for next year's calender!
Hope whatever was ailing you is all gone.

Your babies always make me drool a little.

Glad your feeling better and hope you don't have a relapse.

Seeing all the snow you have (cold or not) makes me very thankful to live in a much milder climate.

Huh. If that's your idea of a down day, no wonder you are such a tough act to follow girl! Sheesh! Take care and feel better soon.

Sure hope you are feeling better soon!!!
The 'kids' are looking good, keep up the good work!
I know what its like to feel nasty and still have to do chores, around here, if i am sick, oh well, suck it up, the animals have to be fed!!
take care of you!!!

It's so good your feelin' better sweetie.

Whew, what a busy weekend here 'round the Ponderosa. I kept sayin' to hubs, "ya know I said I don't work cattle in the rain!" Kinda ate those words while the rain dripped on my chin! Heeehehehe!

I just wanted to thank you for visitin' with your sweet comment and hoppin' on my blog. I sure hope ya'll enjoy the ride.

Please drop in often, the door of the Ponderosa is always open.

God bless ya and have a marvelous week!!! :o)

Had I known, I could have told you sooner.

Warm, flat Coke settles the stomach and then you can eat or drink as needed from there. Small sips at a time, don't just down it in a hurry to feel better.

Now you know for what will hopefully never be- next time.

I hope you get to feeling 110%! And aren't they just the cutest. I love the one where it looks like one's whispering to the other!

Sorry to hear you haven't been feeling well Sherry. Take it easy, if you can, and hopefully soon you'll be all better. We've had bad colds at our house, my hubby much worse than me. The animals still need to be taken care of though, right? I've often wondered what it might feel like to just rest and recupe and not have chores that still need to be done...aahh, not in our lives! Take care my friend!

Now see, I am the type of rider that would be attracted to Quinn right away - 3 foot jump and a little lively? :) good prospects for that little one!

Hope you are already on the mend from that bug - and headaches too!