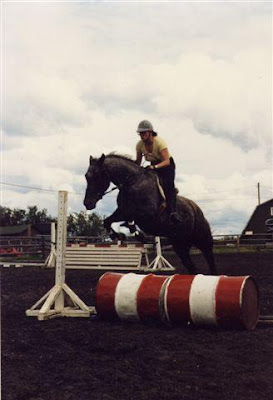 This post was oringinally poste in Nov of 2008 and was actually the first in my series of hohorable mentions .It was posted in 2 parts ,the first and then an update with pictures . I am combining them as the pictures were not recovered with the post ,and I am adding in what I have
Got to thinking about some of the horses I have known over the years, some mine and some belonging to friends, and realized that Debs mare Shiroc, among others, has never graced my blog, Shiroc was a # 1 companion to Deb and taught all of her kids to ride, She had an interesting temperament ,but having had an incredibly rough start she did OK . I was graced with her presence here on the farm for a large chunk of her life until just this spring, on Good Friday she went on to greener pastures. Any how I seem to only have one photo of her and it does not do her justice so I will tag Deb to send me some ,watch this post for an update.Unfortunately some of the older horses around here were in their heyday "BD" (before digital ) so I will spend some time this winter gathering and scanning some old photos for more "Honorable mentions" .

So you might be wondering why , if she was not my horse Shiroc was my first honorable mention. I actually met Shiroc before I met Deb. The stable I was boarding at had a fashion model that hung out there and she originally purchased "Ashes" a 14 month old wild child appy filly. She was halter broke(ish) and weaned the day she bought her then lead/drug home behind a ginormous QH. Add to this she had a huge scar on her neck that the origin of which was never discovered. Anyhow Shiroc, or Ashes as she was then named had a "i will get you before you get me " attitude that proved to be too much for the fashionista. Enter Deb and Brian Oakley Deb fell in love and bought Shiroc (immediately changing her name) I belive it means something about a wind or storm. Which brings me to why I am writing about the old love.She introduced me to one of my dearest friends , Deb and I got to know each other working with our young horses and developed a lasting and wonderful friendship. Miles covered together . Deb and Shiroc moved to a couple of other places over the years ,one of which was a fancy Warmblood stable where they showed them that A) Appys are tough, and B) Appys can Jump!!!


Shiroc suffered what appeared to be a career ending injury and came to my farm to retire . but you can't keep a good mare down , some rest some soft footing and she was sound again for pleasure riding . She lived out her years here as the favorite of many kids and ,well she and I loved each other in our way. She will be missed . And I thank her for the gift of a wonderful friend and honorary title of auntie to 3 wonderful kids. The rest of her story if it is to be told must come from Deb.
Posted by Sherry Sikstrom at 12:51 pm

A wonderful post and tribute to the horse that filled your life with joy and is missed . Have a wonderful day !

Can't wait to see more pics of her, she looks like a beautiful mare! And, judging by how much distance is between her and that jump - yes; I'd say she can definitely jump! Appys can/and do everything!!! I've heard so many people say that they are stubborn and secondly, chicken-hearted. I personally, have never met either one. I'm certainly predjudiced about them, but my horses are not stubborn, and certainly not cowardly...quite the contrary, they are everything that is admirable in a horse. Nuff said? Don't you love how horses bring wonderful people into our lives?? I am soooo thankful that God put a deep and lasting love of the amazing horse in me!!

Wow, another "blast from the past", I don't remember this post, so I'm kinda glad (only in this way) that you're re-posting;)
Great story, gorgeous mare!

Great equestrian blog! Why not come over to http://hay-net.co.uk/ and post your blog there too at this Equine Social Blogging Network!

Thanks for the surpise this morning when I opened your blog. I thnak her too for bringing us together. We met in 83 and are our friendship is still strong. She was an amazing girl. I got my boy blue from her and I don't think Anglea would be where she is if it wasn't for her. If I didn't find her I don't think I would have found you either. Pictures! how many do you want. I have a whole scrapbook (BD) that I could scan. Watch what you ask for! Thanks for the memories.

Oh just another thought. I could post pictures of both Schiroc and Peps and people will see a trend and understand why Peps is now in my life. Just a thought. Maybe I will post on my blog.

Sounds like a plan. The one I posted here is one of my favorites of You and Shiroc,it truly shows how far you two progressed form "Ashes the killer filly" When you get your pics up, I will post a link and we can compare

She sounds like she has an interesting story. I was actually at a jumping clinic (awatching) and the one rider had an appy and the instructer liked it best of all the horses there cause it jumped and tried so hard, no laziness like those warmbloods!