Because snakes don't have armpits

Waiting still for the last few calves to come. The waiting seems longer this year , as we have had a couple problems, and the time in between the last calf born and now is quite long.Maybe also because we have such a small cow herd . 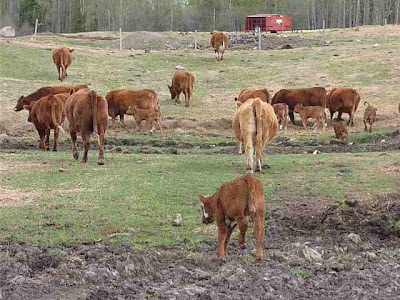 Likely it has something to do with the fact we had a couple bulls get in with our herd last summer for a few days, which you might think would speed things up, but they have to spend a day or so fighting and jockeying for position in the herd , and can be so busy doing that , they forget the "task at hand " so to speak.Or they took a break for some odd reason. No lameness issues or hoof rot last summer with the bulls so , who knows ,maybe like the title says its just  one of those things. Anyhow I wish they would step it up a bit , I want to get the cows out on pasture soon and  start watching the mares . Looks like Peps is not bred, and Jazz? hard to say for sure. Jewels on the other hand looks large and hugely uncomfortable so I guess we will have one or 2 foals to watch for this year.That's farming though , gotta go with the flow and  things can change pretty quick from what you planned to what you get. For no real reason other than "Snakes don't have armpits" yes ,in point of fact there is a little more science to it than I am letting on , and ways to assure some of the variables are out of the mix, but the mares were confirmed , and sometimes they lose a foal early on. And the cows were checked as well. Any way you look , it is what it is, and we will be done calving, right after the last calf is born.


Just a quickie video of the gang so far

Stay safe everyone
Posted by Sherry Sikstrom at 10:12 pm

calves are sure growing up there! We have 4 heifer left to calve and been at least a week since the last one, wish theyd hurry up too, although not to watch mares :( Guess I will have to see yours on here. hope there is 2, so much fun watchin the babies play together.

"We will be done calving, right after the last calf is born'...That pretty much sums up the ranching life. LOL

Seems like a lot of people had mares come up open this year. And then Shirley's dog had a phantom pregnancy. Wonder what's up with all this non-sense?

No foals for us this year. Apparently, my mom and brother could not figure out how to sort off a couple of mares and open the gate for the stud. (snort)...But it's probably just as well. I haven't even had a chance to bring my last year's foal out here to work with. She is getting halter-broke and handled, so it's not a complete mess. (Thankfully!)

Those calves look so healthy and happy! So cute. Wow, I've been doing a little catching up here, and I've apparently missed some important stuff. Happy (belated Birthday my beautiful friend!!! 45 is young, and you're just wonderful! I agree about aging - it is what it is, and we're so much more wise and experienced than when we were young sprouts, right? I turned 52 this year...whoodoggie!! Enjoy your life and be happy, it's the cycle of life my friend! So sorry about your (aunt?)passing away. It hurts so much to lose important people, hopefully it reminds us to cherish those we still have. Sometimes (often times) I have to remind myself to appreciate those few people I still have in my life, and just love them. I hate death!! I look forward to seeing everybody in heaven someday. Love you my friend. Take care, Lorie

The work is never done!!

At least the weather has finally turned!!! Can you believe a week with no rain!! Woo hoo!

I hate waiting. We had our last one in the heifers and it was overdue a week. Makes you watch even closer just in case it was a big one. We're down to 20 cows left but they're close by and it makes it SO much easier.

Id like to invite everyone to a post I've just published honoring the TV show "Big Valley", and also actor Peter Breck. Included with this post are 2 personal recipes that was sent to me by Peters wife Diane, so please stop by and say hello and share your memories of this classic TV show. Richard

Looks like a good group to me. I like cows. I've heard people say that they are very stupid animals. But those people would be wrong!

I hate snakes and I have to admit, your title had me a bit worried you were going to show a snake so I had to work myself up to be able to read. whew my relief when there wasn't one!