it got away on me 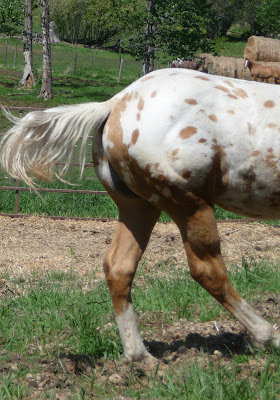 The weekend ,the month of May, the post that has been rattling around in my head but  not quite gelling yet.And finally this pic of comet that would have been stunning if I had clicked the shutter a second sooner!Still not bad though , this boy has a nice behind!
Looks like he is growing up as nice as big sister Catch a Dream (the fat baby!) 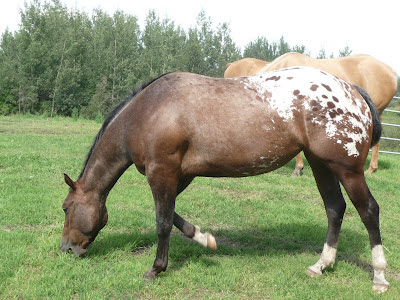 Anyhow , had a great weekend, busy as always , put the young girls in with the big mares for summer grazing . Overall it went well though we did have a moment or two when "That Ritchie mare " was telling the kids the rules . That mare is a force to be reckoned with I tell you , but when she seemed to be getting a little rough , she still defers to me hollering EASY RICH!

Then Deb and Angela came over and we took the leg wraps of a little heifer  born last weekend with wonky legs. It worked slick and she is right as rain now. Mom is still a fire breathing dragon , which puts her on my list  for a truck ride this fall. There is someone out there younger and faster who might like her in his/her cow herd.But I am not that person.

Saturday night went to the Bronc Bustin at Wildwood, had a great time as always and got so see a few people I had lost touch with. Not built for late nights like that I tell you 2 am is WAAAY past my bedtime anymore, so I was dragging big time today.

Shuffled a few pens around and put the girls in the barnyard for cleanup. Also moved Cactus to a grassy pen. Poor Johnny got a slap in the ego, when I moved Cactus , he puffed up a bit and started calling . Cactus looked his way , and watched the gelding run down the hill, then yawned largely and began to eat grass. I nearly fell down laughing at the look on Poor Johnny's face!
Here he is on a better day 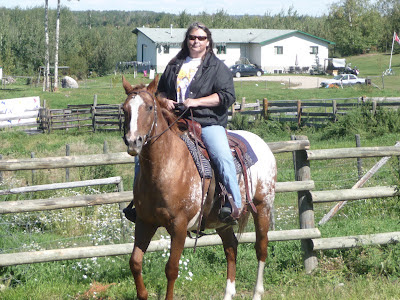 I love the new header shot ....very summery. And those spots on the backsides...are as beautiful as ever. Your night out sounded fun

I agree- nice to see summer in your header photo. I didn't realize Comet and Fat Baby were brother/sister, but I don't know how I missed it. Two peas in a pod. I laughed a little at the photo, because I'm planning a post on "outtakes". My camera doesn't shoot or focus fast enough to keep up with Nitro.

I've always got a post mulling around my head...

Yes, that header shot is pretty, as well as the rest--even the horses behind ;-)

Nothing like a good look'n butt to stare at!

Poor Johnny nothing like slap to the ego to knock 'em down a peg or two.

Love the new header too! All the girls napping in the sun?

I have an old mare that would be an awesome babysitter.
I have chosen not to breed any of my mares, because I dont feel I have the facilities or the money to take a mare properly through pregnancy.
My last "baby" is now 12! LOL (bought her as a 2 yr old)
Let someone else do the hard work! Getting them through to their two year old year!! (like you) LOL
Not that I wouldnt love to raise a foal, like every other horse lover.

Like the new warm weather header...was tired of looking at all that snow! Boy, do I hear you on the late nights. This mature lady needs her beauty rest!! But, it is totally worth it once in a while, especially if there's dancin involved. :) Glad your weekend was swell!!

aww, poor Johnny. He's just not that cute without testicles, I guess.

I Think you're gorgeous, Johnny!!

That is a great butt shot!

Had a pretty good laugh about Johnny, poor guy!

I love the header shot too, so peaceful :)

Yes RDA it is the ladies in the sun