I  read a quote years ago that said
"don't knock the weather , if it didn't change once in a while 9 out of  10  people couldn't start a conversation"
I don't know I am  pretty willing to knock it right about now
We have had an awful lot of rain this summer it is hot sticky and humid, not what  us folks  from out here in Bugtussle are used to in the least!
Usually by this time of the summer it is dry , and we are  having to really watch to rotate pastures to best manage the grass, and keep ahead of the stock. this year, the grass is keeping well ahead of the stock and me with the mower too!
When usually I am  fighting with dust, this year I am watching for  mold .Luckily (insert eye roll) I am allergic to both so the Benadryl I bought  is not wasted!
And Mushrooms! in huge amounts and variety ! If only I knew which were good I could be harvesting them
here are some pretty ones I  found 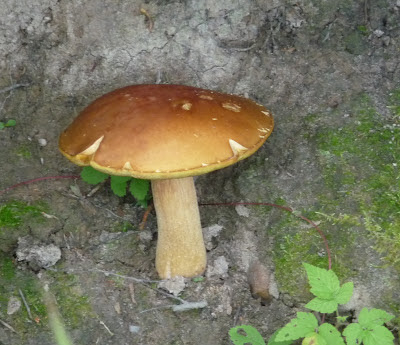 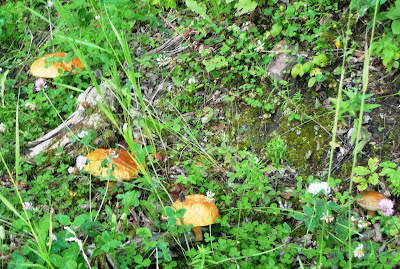 I guess I will just leave them for now.

With all the rain and humidity the bugs have come into  full force.We actually don't have quite as many Mosquitoes as last year, but the flies are  horrendous!
I don't have enough fly masks to go around, and they tend to tear them off in the big feild anyway so I usually  either light a smudge for the skeeters and unless the flies are super bad let it go . Well this year they are super bad so.I went out and applied fly spray to all who would let me .

Comet and Quinn took the spray like old pros, and the geldings seem not as bothered where they are so I let them be. But the girls, 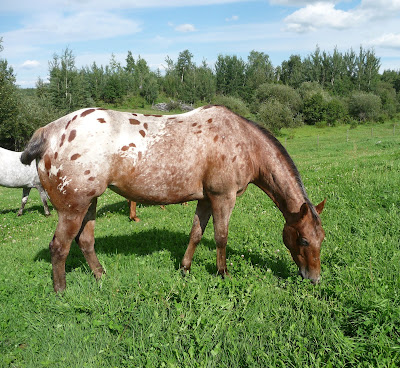 My sweet Annie, wasn't sure at first , but she decided the spray was a good thing 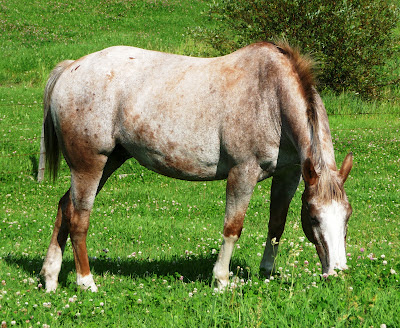 " That Richie mare" She knows the ropes and  didn't even need to be haltered for her spray , just stood there loving it .Looking pretty good for an older girl I would say . 18 years young. She will soon be retired from the broodmare band , and live her life out here as a pasture ornament. But not yet, she is confirmed in foal to Windwalker Cactus for a 2013  foal. Hoping for a filly but I will be happy with whatever I get from this gal, I always am! 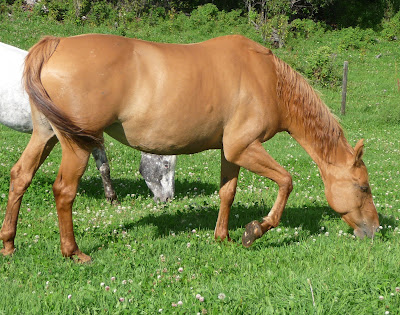 Jazzy wasn't having anything to do with me and that "evil spray" but the next day she decided it was a pretty good idea  after all. She is also bred to Cactus, but we need to wait a  few days  longer to see if she caught . 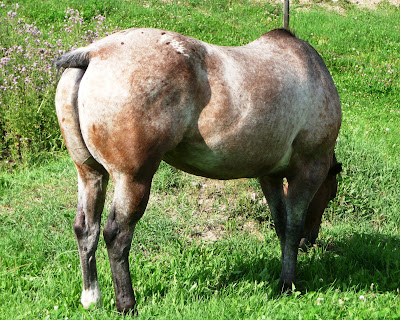 Ici too refused to be sprayed  but promptly went over and rubber her face all over Richie so ...
Confirmed  as well for a 2013 Cactus  baby 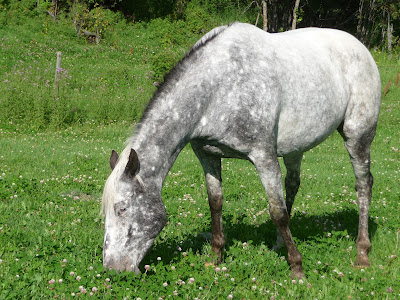 And then there was Peps, don't be a grey horse in fly season is all I can say! Poor  girly was COVERED  , he face was black with them, I got a hold of her and wiped her face first, I thought the  poor girl was going to get in my pocket! Such relief! We checked her with Ultrasound the other day and she is open, but we did try again this weekend so  cross your fingers would ya. Her owner Deb, would really like a foal  from her and Cactus. I too am looking forward to what she will produce.

We do breed our mares a little later in the year than some , but with calving , and my work I prefer to deal with one thing  a time. Our foals arrive after the calving is done and the herd is out ,so that we have  lots of  area and hopefully grassy pens for the babies.

4 mares bred this year ( we hope ) is a greater number than we usually do , but I have had a good market (Comet and Quin  have had  quite a few inquires and I have yet to really advertise them) And if Rich or Jazz , have fillies , those  will not be on the market , especially Richie's  so ...

Back to the weather, stinkin hot again yesterday, then all of a sudden the a system rolled in, and what a system! Black clouds swirling up from the lake , and winds that were later clocked at 100km per hour! I stood in my driveway watching theses sheets of rain and wind rolling across my sisters place , yet where I stood it was eerily calm. then the wind turned, and I hot footed it into the house , I had to run maybe 20 feet and I still caught some of the marble sized hail!
Heather and Marc lived in Edmonton during the tornado 25 years ago , and we  have had several  near misses over the years out here , so it takes a bit to scare us with a thunder storm , but this one did it, everyone went down to the basement to wait it out. 10 minutes or less and it was over. I went out to check the stock and fences , and all I found  was on  down tree in the middle of an empty pasture and this 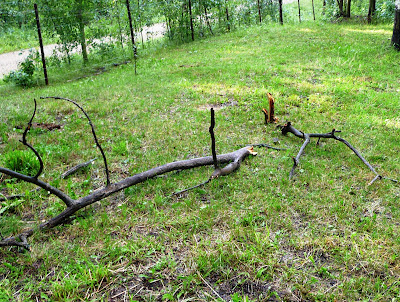 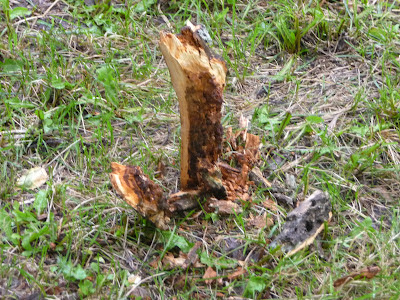 It doesn't look like much until you see that the foot long stake/chunk  of debris was driving a  full 2 inches into the  packed ground on my front yard ! Takes  some force and trajectory to accomplish that , and seeing as that is a favorite place for Harley to hang out , I was awfully glad he wasn't there!
The fallout form that storm included down tees all over Onoway , the vet clinic lost their sign and the high school gym and cafeteria lost the roof. No injuries reported and the rest is stuff, but scary all the same .
Today was stinkin hot , and whether it is the barometric pressure or allergies, I had the second migraine in as many days ,sigh , so layed low  most of the day . Late this afternoon I went out to check  cows , and take salt .
Even with the new culvert, all of the rain , and the beaver dam, and damn beavers, have the lake so high it ran over the road most of June and July. We did have the road  smoothed out , but it is so saturated it doesn't take much to have it looking like this again 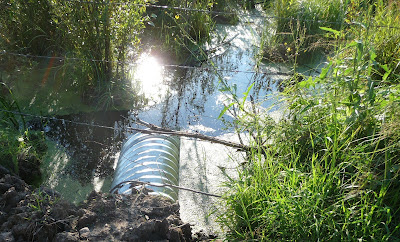 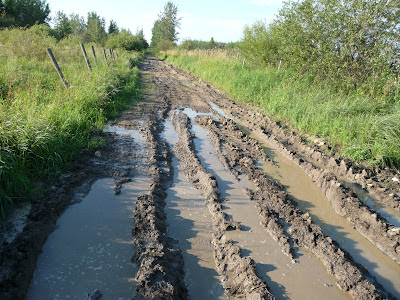 But the upside is it is pretty sand soil, and it will dry in a day or so and we can drag it , as long as the rain stops.
Cows look fine, except for the flies bugging them, too, but other than an oiler not much I can do 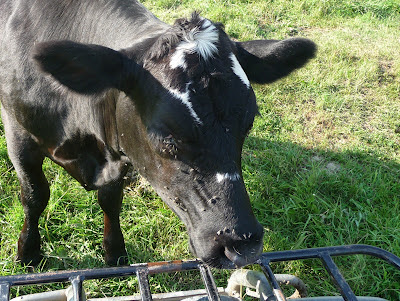 Fly spray for me please! 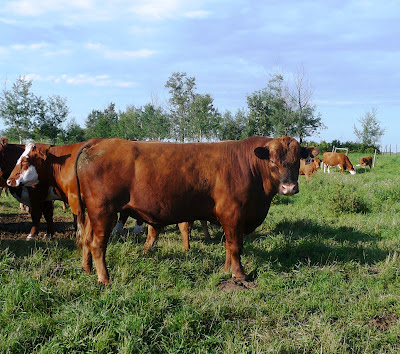 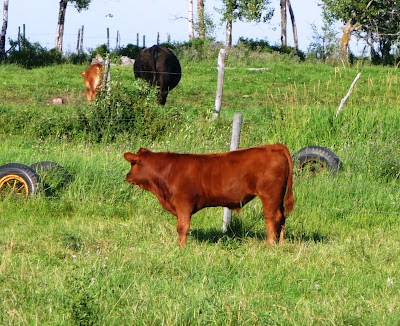 why yes, I am a handsome  brute!

And just as I came in from checking the horses a few minutes ago, I noticed the poplar leaves were turning over.(Usually a sign of rain coming )  Sigh , I sure hope they are wrong.
Stay safe !

Posted by Sherry Sikstrom at 11:48 pm

Oh damn the rain ...I really feel for you, especially with hay to yet be baled .....do you do wrapped silage? .....I cant even puff sunshine your way as it is due to be a rain day tomorrow here as well
Stay safe

I think the weather gods need to figure out a way to balane fairly everybody's needs. We'd kill for that rain but yet when we do get it, it causes so many problems because the earth drainage here sucks and so the water goes everywhere else. Really strange this summer but I think I said that last summer and the last summer and on and on. :) I'm sure I will next summer. *sigh*

Glad you and critters stayed safe through those storms, yeeesh, I hate big bad T-storms.

Weather is getting more and more bizarre, is all I can say.
Global warming?

It's like the first of September here, except with all the good rain we've had, the grass and weeds are thrilled.

It will be an interesting fall.

Seems everywhere there is unusual weather. We finally got our summer, although the humidity is much higher this year.
Bet your horses are loving the smudge and fly spray. I need to get Beamer and Rio face masks since they live alone and don't have another horse to trade swishy tails with.

If we could just average this out things would be perfect! Hothothot dry here, and extreme fire danger.

Oh, those flies look horrible. You are such a good Mama.

I hate flies too and they are bad here as well. My Kali just stands there and waits for me to brush the flies on her face and looks so sad when I leave.

....and we are short of rain this year. So sick of hauling the hose around for the garden!
I so remember August and flies with the horses -- always felt so bad for them. But, you do what you can do.

I laughed at that quote! And we need rain, send it our way!