Not much to say , I did ride  both Cat and Andee this weekend and both went well, though Cat did show me  just a little "Appytude" with her "angry face" no other resistance to speak of ,just a little grumpy.I take it we will get though stuff like that just fine . Because either all these years with Appys or just because , I have a little "appytude' myself! 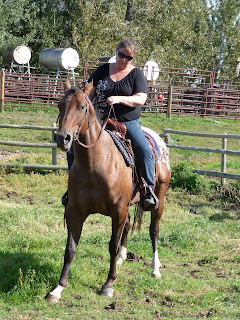 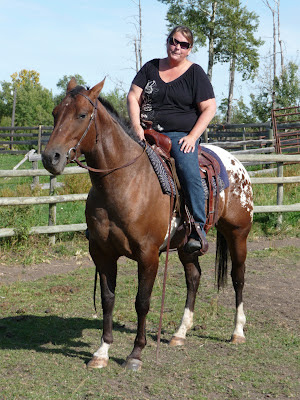 And then there is Andee, soft and just looking for the sweet spot . She is a very sensitive girl, and a pleasure  to work with 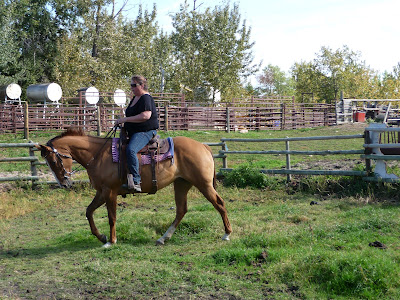 the rest of the weekend went well, I  worked on Cactus then Sunday dragged Deb up to Barrhead to the rodeo  with me . Watched my cousin rope and had a nice visit with family. Then home to chores and a quiet evening .
I took a few pictures over the last couple of days . I have been trying to get a few more good ones of Quinn, these are,while pretty enough not really well lit for adds. Not sure if these would help or hinder the add.But they are pretty so... 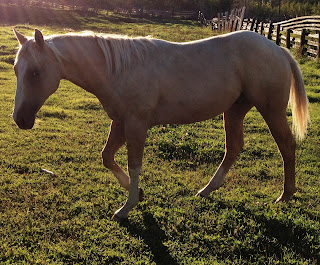 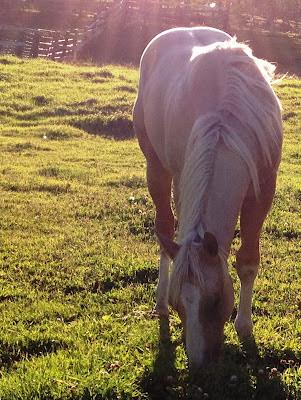 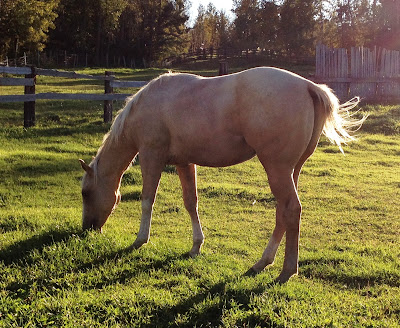 This next picture is a lesson in what NOT to do , I was wrapping Cactus' leg and my back got sore so I took a seat . And while Cactus is a rock and a really  steady guy, I sure would never suggest this to anyone.A lot of ways it could have gone wrong. But as I said on FB it brings to mind a conversation from years ago, about stallions and how they  just get mean as they get older. Some do maybe , but if they are taught respect and trust , you get that back .
Oddly I did not get hurt doing that, but later in the weekend , while forking hay ,managed to stab myself in the knee with the fork! Seriously I have no idea how,I couldn't  do it again on a bet! (nor would I want to for that matter) Yup that's me , you can call me a lot of things, Sherry, Share Bear, Fern Valley , but I can guaran -darn -tee you , NOBODY has ever called me Grace!
The knee isn't bad, just scraped the skin and bruised more  than anything . 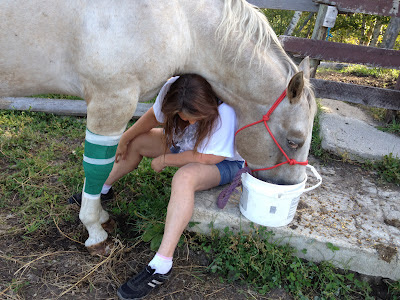 This last 2 are just because ,like the tile of the post , I was walking in from chores and the way the sun was over the trees ,and peeking through the clouds ,I thought is was  just beautiful !
Like a  window to Heaven 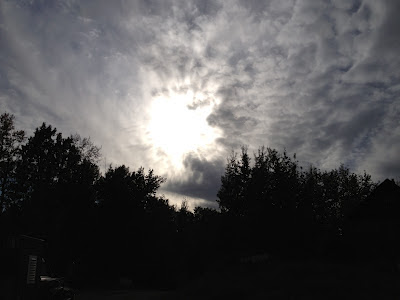 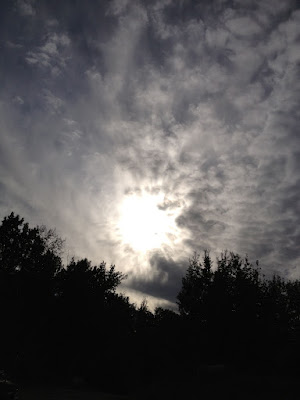 Hope everyone had a great weekend .
And as always, do what I say not what I do, stay safe!
Posted by Sherry Sikstrom at 12:18 am

Cat and Andee look so good!! And of cours Quinn!! Such beauties you have!
I think we have all put ourselves in unsafe positions when being around horses. Last summer while treating Fritzy's hoof abscess, I was cutting off the hoof wrap (this is why I need to invest in bandage scissors!) and I thought my head was out of range, well, aparently not. Fritzy picked up her leg and kneed me in the head. It about knocked me out. I had a good sized bump. I am extra careful now since Frity gets so many abscesses!
Love the last 2 pictures! Lovely!

What gorgeous pictures ....and so nice to see the sun shine

Love the pictures! Cat and Andee look great - nice that you are getting some rides in. Gotta love the appytude - I miss that a bit myself... :-)

Those two girls are sure lookin good! And Quinn, I love it when the sun is shining behind horses in pictures looks so nice.

Looks like you had a fun and fabulous weekend! My dad always has a talk with the studs, be good, you can stay, be bad, you're headed to the vet.

Fun pictures, Grace! I mean, Oh Great One Who Stabs One's Own Knee. Is the knee "forked" up? Oh geez, I could go on and on.

Your predicament with Cactus is totally something that happens with my horses. I'm working on teaching them to give me my space for safety's sake and because some times I've just got to get my chores done, but it's kind of hypocritical on my part when you consider that I'm constantly hugging them, hanging on them and riding on their backs.

I so want to ride.
I am still waiting for Emma to heal up. Its only been 4 months, I am so impatient! Vet and my farrier Dad said 6-8 months, (sigh)

Nice to see you riding! Good girls, hope you get many enjoyable rides on them this year.
Quinn is looking good, your golden boy in the golden light. Love the last two photos - window to heaven is about right.

Awesome weekend by the sounds of it! I'm still struggling to see how you could of stabbed yourself though. Having handled a fork 1000's of times myself and have not done that particular stunt yet I want to avoid it!

Horses can hurt us in so many ways if they want to, but sometimes we just have to trust that they won't. I've done that, or worse, plenty of times. We're always asking them to trust us, and they should...but there are times when maybe they need us to just trust them too. Not such a dumb thing that you're doing, I don't think. Cat looks amazing!! Hefty girl!! I actually enjoy some attitude from the mares...what's a girl without opinions? :) Glad you're getting some good rides in.

Sorry I laughed ....hey it's your fault, if you didn't write so well and show the stuff....what can I say. The girls look good and you look like you belong right there.

Great to see you up where you belong, girl.
You look mahvelous.