I mentioned a while  back the Eurus (lovingly  known as Arse ) had been injured and was coming her for his recovery. Well it took some time  with scheduling and  finding a day that was safe to travel (the days after he was hurt we had over 25 cm of snow and the roads were atrocious  ) I refuse to haul a horse on treacherous roads, especially one who is already sore!
Anyhow  it all came together this morning so I loaded Cat  and hauled her out to where Eurus has been and we swapped . Angela will be using Cat  for  her winter riding buddy  until Eurus is  back in the game , and he will be here, he has an appointment  for chiropractic and massage and hopefully we  will have him right as rain soon . Got home here and he hesitated a bit  stepping out of the trailer, then his old buddy and past pen mate Phoenix  called  out (you all remember the  all star antics of Fix and Arse?) his head popped up and he looked around , then let out a big old sigh as if to say  "oh , I am home" I swear that horse  tugs at your heart, he is a combo of Eeyore , and Winnie the pooh! I put him in with the girls  Andee and Annie , had planned to  put him  by himself but ... They are fine , Annie tried a little  bossy mare stuff which is funny  because in a herd she is usually scared of her own spots! But Eurus  just calmly  moved away until she settled  then parked where I suspect I will often see him, face first in a round bale! 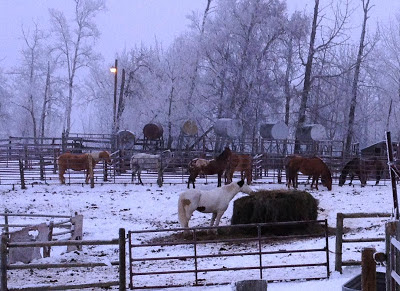 Cat also traveled well and Angela has already had her  saddle and  gone for a spin this evening. She says she is doing  very well and the wolf tooth she removed for her a while back  does seem to have been the root of some of her  issues (glad we got it fixed before we pushed anything ) 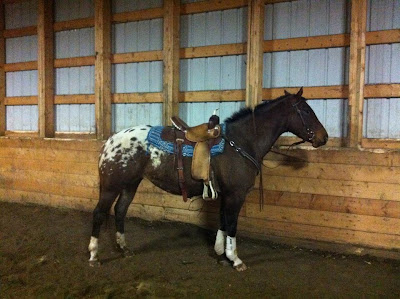 (borrowed fro Angela's pictures )
I think  Cat will do well she is at a barn where they do a fair amount of  roping and jackpots , so lots of time standing around watching the show  will be good for her too .

The tack sale was good, but COLD !  in an unheated arena with the doors often left open , made for an uncomfortable day. I did make some sale s and a lot of  contacts as well as bumped into a few old friends .
I met with  the folks from Higher Trials  and had a good talk , I am  quite interested in the Equine assisted learning programs , more specifically the facilitator training ,. they too seemed to think it would be a good fit with my history so I will be looking further into it, there will be a course held locally in future which would be  great so stay tuned I may have a new career path opening up ! 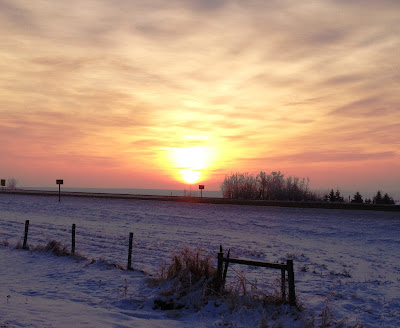 this picture, I took on the way to the sale , the sunrise was so pretty!
Stay safe my friends
Posted by Sherry Sikstrom at 11:33 pm

Glad both horses settled in well, what a great trade! Higher Trails looks like a good place to learn, new directions are always exciting! Looking forward to hearing about your upcoming experiences.

What a great opportunity for Cat! But you know you are going to have to start defending your decision to keep her because the people at that arena are going to fall in love with her!
I really hope you do the EAL- what a perfect careeer for you!

Shocking to come by and find you with your Arse hanging out!!
:)

That is a beautiful sunrise! I used to do fairs with hubby and they are really long days. And then to have the doors open wide, brrrrr.

I would have been asking who left the doors open??? Closing them myself if need be... That's just me though.

I have seen that in horses when they come home. That sigh of relief, knowing all is right and calm in their world again.

A new career? As if you don't have enough going already????

I'm not sure I could handle living in Canada and already having snow! WOW! Glad you made the trip safely!

Sounds like both Cat and Arse are settling in nice. Sure looks different seeing that white horse there now, he kinda sticks out :)
That is a pretty sunrise, too bad the sale was cold all day.