So it seems it has been a long time since I posted about  young Harley. He is fine , doing well and a big boy weaned and eating well. He has always been a quiet  dude s  I seem rt have forgotten a step, he was easy to handle , would pick up his feet and accepted me touching him anywhere, but ... He had never had a halter on! Oops!
Well yesterday was the day , I needed to move him and while I could have made it happen without the halter, there is no time like the present right? So in I went , he was a little shy when he saw the rope  but his friendly curious nature took over  and I got that on him relatively quickly . That is where it stopped he would give to pressure and  didn't fight hard but it just wasn't moving forward somehow . I had my  yearly  panic "oh no ! what if I have lost my touch???" ( do it every hear at some point ) then walked away for a few minutes and went back, he  finally had  the  little tantrum he needed to have and gave in , you know it takes the time it takes and while each are different in their own way ,the pattern is  pretty consistent , a little  give and take , a little challenge and we are good to go. (except Dandy, that colt was something , I halter broke him by walking into the stall , putting the halter on and leading him out , no muss no fuss, and never looked back!!!!)
Funny, told my niece about it , and said something about I  had wondered if I would get the job done, her response was "Auntie, it might have been a matter of  when , but never a question that you would  get it done!" I love that  my peeps have such confidence in me , even when I don't!
Now I KNOW i have  about a half  dozen  foal/Weanling halters, but for the life of me I could not find a one other than the HOT PINK one ,so Harley is a Tough  enough to wear  pink guy !
Pics are in the barn on  my cell so not the best quality but ... 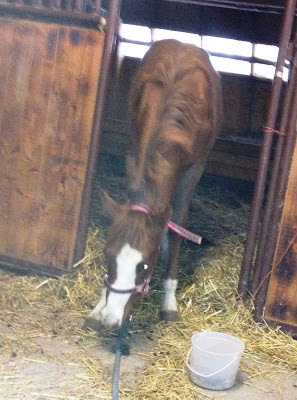 Coming out of the stall , a little slow and  cautious, but he got it figured out 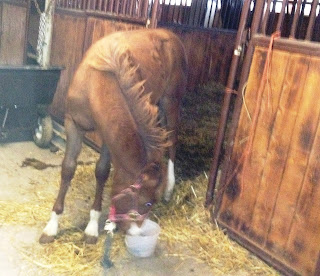 A little  double take ,in case the pail was  full of  snakes or just crunch!

I don't leav it on esp as it is a little big but I went  back  in today and  we did it all over again. Much better today , still a little hesitant but better. 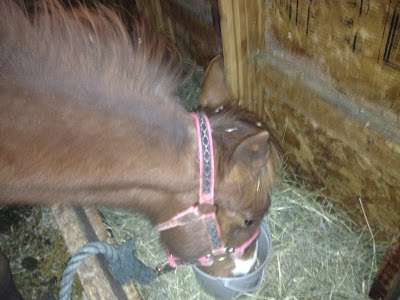 And you know what? He still lets me pick up his feet ! LOL 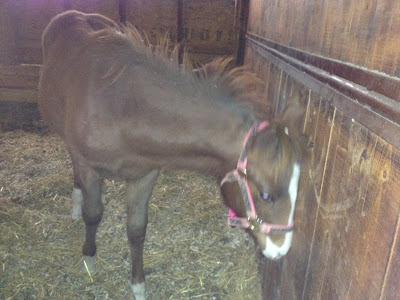 We just look a little more together when we do it !
Good weekend otherwise, went to town for CFR and the farm fair on Sat, then chores and sundry things  today and went out for supper and to visit Martins dad .
With all the snow the roads  have been pretty awful but are finally improving . and the snow?
Well who enjoys it more than this guy ? 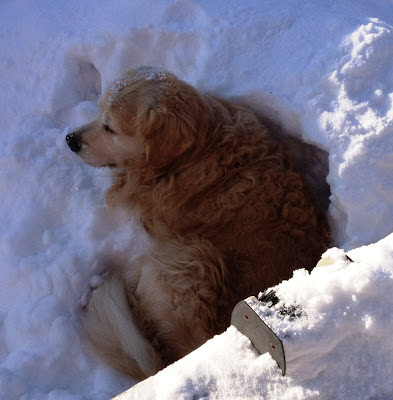 Stay safe and warm!
Posted by Sherry Sikstrom at 10:58 pm

How cute is that wild and crazy Mohawk-hair-do on Harley??

Dang, he has a bad case of stall-head;)

Kudos to the handling that makes good sense to any reasonable creature! Although the hot pink might have given him pause;)

I'm glad Winston enjoys the sn*w.
He can keep it, thanks very much.

Have a great week!

Good boy Harley! The second photo cracks me up- he may not have the Appy spots but he's got the eye!
It seems they learn well once they have their "moment", in fact I always worry if they don't have that moment, always waiting for the other shoe to drop when least expected.

If thats the kind of foals that boy throws, I wish I was closer I sure would be tempted to cross him with Emma.
Amazing quiet minds they all seem to have!!

I love Harley's coloring! It looks like he was painted/stained with the same brush the stalls were! :)

I always have that moment when you wonder if you know what you are doing! Horses seem to bring that out in me (and kids too, lol) He is looking good in pink but I def think its about time you have some fillies up there, its been all boys for a long time :)

I love colts in halters. They remind me of little kids in glasses... lol :)

GO the pimk halter ....looks great!!! and boy I cant believe all the snow. Stay warm!