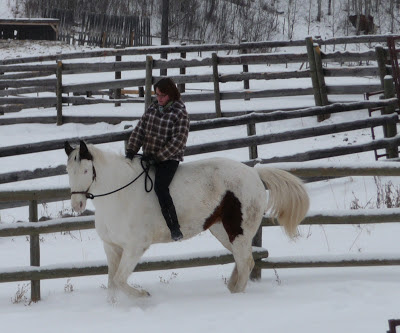 So, I have mentioned before that Eurus is here for a while to recover from an injury. He is doing well and seems mostly pretty comfortable, the wound is healing nicely ,but he is still a little well, off on his hind end. Angela was out  this weekend for a visit , and brought him in  for grooming and  just to check him. He seemed really good so  she popped up bareback to try him. Still seemed fine  no hesitation or off steps ,but still  just not quite right . Tina, from On  the Spot Equine therapies  was here this afternoon to check him over,and did find some issues(I missed the treatment as I was out catching Johnny,but I will tell you about that later )
It  seemed to go well and he was  back out in  the pen. A few  hours later I saw him lying  down, sternal , and totally relaxed ! Might not seem like much  but since he has been here has  not layed  down other than to roll or  down and up, he tends to rest with one hip  leaned against the rail fence . So to see him down relaxed and comfortable was  great, also watched him get back up, total fluid movement  no stiffness or hesitation! Looks like the Quiet Giant is on the mend! 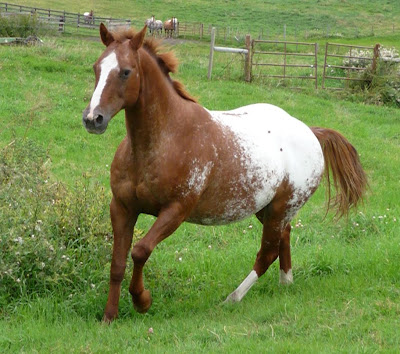 As to why I was out grabbing  Johnny Handsome, well I  mentioned a while back that he can be a bit of a fool when we are trimming him, only on the one hind leg, otherwise he is a good boy . This  horse is so well behaved and kind on every other level I baffles me that he can be such a tool when it comes to  one foot being trimmed, he starts to get iffy on the first hind but the second  BAM! He is BAD . Anyhow, I mentioned this to Tina and his history (Badly  contractured hind leg as a foal ) and she thought there was a good chance she could help him. Well glad I asked, my poor guy! he was out on his hip, and shoulder, neck and jaw! , don't I feel like a jerk!
In my defense other than the farrier issue he has never offered to  resist or complain under saddle , he is willing and honest so... who knew? Appaloosas are notoriously stoic as well. He was funny though , Johnny doesn't really like the barn, was never in it  much and at 14 he is fairly convinced that is where he will go to die!  He went in and stood , but shook like a leaf and fussed ! When Tina stood up on her  block examine his back and adjust his hip , well then ! he buried his head in my chest and  just froze! Poor boy! After the treatment though he seemed much  calmer seemed to realize she was helping him, and wow! when she adjusted his shoulder what a difference in his range of motion! This horse was good before, he is gonna be awesome now!

Not much else going on  at the moment , thinking I will lay low today and maybe look at taking some of my Christmas collections out and getting started , or maybe there is a good movie on...
Stay safe and warm  my friends!

Posted by Sherry Sikstrom at 10:24 am

Its amazing what a good adjustment will do to even a horse that seems fine. The more I hear about them, the more I want to get all my ponies checked out just in case.

A good adjustment works wonders in humans, too.

I enjoyed reading about your Arse. HAHAHAHAHA.

My mare had the same problem. Like your's it showed when lifting one hind to trim! Turned out she was out all over. Poor girl.

Eurus and Angela make a great pair! Glad you figured out why Johnny was off, poor baby. The big bad barn isn't such a bad place after all. I didn't know Appy's were notoriously stoic, one more reason to love the breed!!

Great news for both Handsome Arses:)

Although it's hard to believe Johnny could be any more awesome:)

Love the picture of Eurus and Angela in the snow - he blends right in, except for a couple "spots".

I'm getting my boy adjusted for the first time next week - can't wait for the results, but a little nervous to hear what they have to say.

Love your new header shot, so cute! That's amazing, two success stories in one day. Tina is a miracle worker.

Glad to hear things will be turning around for the better for both Johnie and Arse. Seeing them laying flat out and relaxed- priceless! Unless they do not move long enough to send us into panic mode. Then a flick of an ear or the sight of a breath is a sigh of relief on our part...

I have been watching over Kat all along to see if there is ever any stiffness, soreness or anything. Thankfully he is good and solid. Little man does enjoy a good massage now and then. Heck Who doesn't?

Hi I'm a new reader! Your horses look lovely, can't wait to keep following and learning more about them!

Interesting. I don't think I've read a negative thing about equine chiropractic experiences. Horses do tolerate so much and some are less "verbal" about their aches and pains.

Hi I'm new to your blog, but I'm glad I picked today to come check it out.
I am fastinated by equine chiropractic. I really wish I could find one here in WY that I trusted, I'm sure I have atleast one horse that could really use it.

Marissa, and Cindy, welcome! thanks for stopping in

And you never know Cindy, my blogging buddies are a great group ,someone might know just who you could call

Ah Winston....who could not love that dog. Glad to hear everybody is feeling stretched out. Love your spotted decorations and how they came about.

PS. Sherry could you send me your actual mailing address.Thanks