The winds of change and more of the same

I have been a bit absent lately , absent minded at least . Lots going on in my life and around me and many changes coming  for folks close to me. I don't mean to be obscure, but I am not ready to talk about  much of it . Suffice to say Martin and I and the family are fine. We just have some new  things to deal with  . One thing is that dad who has needed  hip replacement surgery for some time is finally scheduled for it at the end of next month ! What a relief that will be for him . He has had so much pain.

That and the rest of the stuff going on has me feeling a little discombobulated lately ,the things that  usually bring me peace , the horses and  such are still doing so, but Mother Nature threw a wrench into things with another blast of winter bringing snow wind and more snow the last few days. Sigh, makes for pretty pictures I guess . I think I have a case of the "Februarys" in March 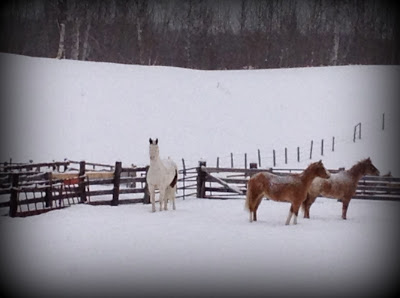 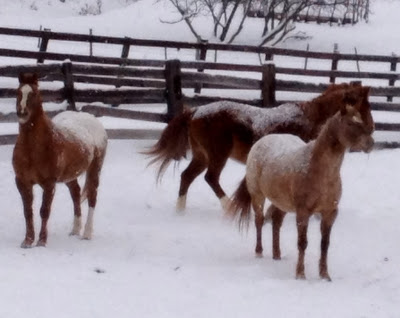 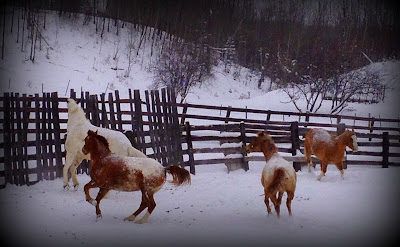 Probably doesn't help that about 2 seconds after I took these shots I stepped on a chunk of ice and wound up flat on my back , soft enough landing , but I am sooo done with winter this year.The shoveling and the stomping through snow and the ice are getting pretty old. I want to  tell it, kind of what Harley seems to be saying here. 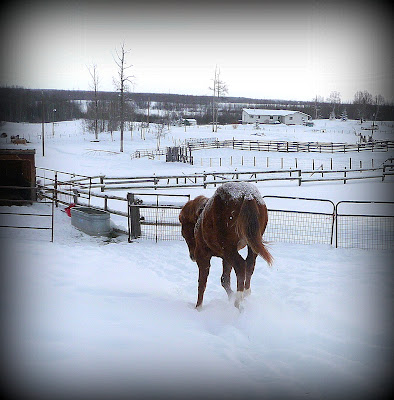 But spring is around the corner I know , calving will start and we have a wonderful event to celebrate , on April 15 my folks will have been married 50 years! And we have a nice celebration planned for them.
Then I am off to the Mane Event at the end of April,the foals due in spring  and looking forward to attending a clinic in July so lots of good ahead all around . And the changes I mentioned earlier are not bad , just simply changes, and it will take some time for us to get used to it all .

Kind of a blah post I know, but it will get better ,it always does . Meanwhile stay safe and warm  my friends
Posted by Sherry Sikstrom at 12:25 am

it's ok to have a blah post once in a while. Spring has to get here eventually! ;-) We were *thisclose* to spring and then the temps plummeted, with more snow and high winds. *sigh*

I hope everything sorts itself out for you - change and difficult times can be very tiring.

I don't even think it was a blah post. I vote for interesting. I hope you didn't break the camera when you fell as I have been known to do. I didn't care (when I stepped in that hole) about broken bones or anything aching at all. It was the camera that broke that cinched the vein of disparity for me. Nothing like a simple drop that will ruin a good camera. Glad you got up and around again though. :)

I am so ready for spring to get here too. Looks like we might just go from winter to summer instead. Hope the change your going through isn't too bad.

It's okay to be absent minded. Change is unsettling, good or bad - it just, well, it changes what we are used to. It always sends me into deep sea thinking about life, and it's meaning. Someday maybe I'll find that answer?!

So sail along with the winds of change, and all the new meaning it will bring. Wishing you blue sky's and sunny days!!

Change seems to be in the air. Sometimes I feel bad when I write about unspleasant things but then I think that if something is consuming my life at the moment, I feel better when I write about it. My blogging is just as much for myself to unload what troubles me. The pics are lovely, but yes enough already :-)

It's ok I feel blah as well . all was looking promising of spring and now we have bin hit with snow and cold once again here to ! But I am hopeful as I am seeing more and more signs of spring popping up each week . I hope everything with your family turns out well ! Lovely photos ! Before we know it we will be complaining about the heat lol ! Have a good day !

Beautiful pictures, as usual! I think we are all ready for spring. But you have to deal with so much snow! Hope it warms up and melts off so you can get some relief! I know I am ready for it to quit raining so I can start riding my horses again. Soon!!

I hear ya....we've had winter conditions (feeding and waterholes) since October and I'm ready for winter to pack his bags and be GONE. Hope things get better for us all.

Oh yeah, you've got a lot on your mind. Changes need to spread themselves out more, don't you think? They always seem to happen all at the same time. Speaking of slipping on ice, I stayed on the mailing list for the animal rescue back in my old state, and I always know when the ice is bad, because all these volunteers start asking for someone to take over their shifts because they slipped on ice and hurt themselves. There were a lot of broken legs and injured backs this winter.

Hope your blahs go away right quickly! Hope the hip surgery for your dad goes well and frees him from his pain.
Da boyz look like they are having fun frolicking in the snow.

Love the pictures! And so glad your dad is finally going to get his surgery. My grandma had it on both of her hips and she was better after that so yey!