What the heck is an Alberta Clipper? and Spring is on back order

Sounds like something  fun right , like one of the  boats you see in the sail boat races in Australia  Or maybe a "Tall Ship" .
Nope neither, it is a mother of a spring snow storm! and we had 3 of them in less than a week! The first  blast was last weekend  while we were moving my folks, a lot of snow but we got through it. The last, was Thursday 40  cm of snow and high winds in 24 hours. It was a train wreck. 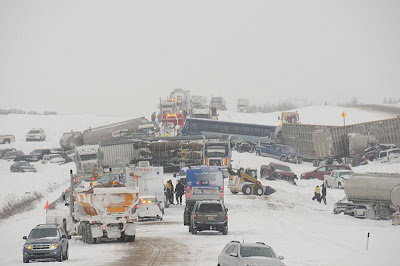 The roads were an unmitigated disaster, by noon Highway 2, 33, and 44 were shut down, and even the Edmonton ring road  the Anthony Henday was closed for a time . The Yellowhead was closed for an accident , but the biggest  was Highway 2 (known as the QE 2) in what was  reported to be the largest multi car collision in Canadian  history  up to 60 vehicles were involved in  one site and in total 100 vehicles in accidents on that stretch of road. The dreaded  code orange was  called over the U of A Hospital intercom (mass casualties) but the news was not so bad in the end , of the over 300 injured, most were minor and treated on scene, and only 3-4 were serious. However I have heard reports of a fatality on the Westlock highway (44) prayers for the families of any one who was lost to this storm.
The bright side? the city and surrounding areas pulled an emergency response system together brilliantly , sending mobile triage and first aide as well as city buses  to transport those stranded in warmth and safety. And as soon as possible for them to be effective the road crews were out sanding and  clearing the roads and by morning we  here had clear sailing . Well done guys, its  rotten hard work, and they are so under appreciated!

The sun has been out the last couple of days ,but it is still pretty cold,should warm up and be normal ish by mid week. But ready or not , and early or not we have begun ! This little fellow arrived  this evening 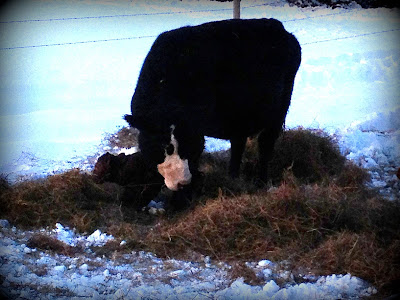 We always say we calve after April 1, well I am not sure in recent years we have ever actually made it to April ,usually right around  now we start. No April 1 is not a special or magic date, its just  that little bit closer to warmer temps and tolerable weather. Every year when we turn the bull out I say, "maybe lets wait a week or so longer, there is always the early ones" and every year ... well we don't wait . That is all I am going to say about that . (to you guys anyhow) .
Overall things are going well, I am still tired  from this past week, but am slowly getting back to normal, a little stiff and sore ,but shoveling  a foot of snow every couple days will do that to a gal . Spring may be on back order, but it is coming , so meanwhile stay safe and warm!
Posted by Sherry Sikstrom at 9:35 pm

That was a storm for the record books allright. I'm so glad we didn't get any of it.
Just want to say that plowing the roads in storms like this, which I have done- you can plow a stretch of road, turn around and plow your way back and it will look like you didn't even plow on the wayu down. The snow accumulates faster than you can plow, which makes people think the trucks weren't out and that plow operators are a bunch of lazy so-and-so's: that couldn't be farther from the truth. More likely, they are out there driving non stop and doing their best to battle the storm to make roads safe for Joe Public. One year on St. Patricks day we had a storm like this, 36 cm in 4 hours, and I plowed for 15 hours straight. So my hat's off to the plow truck operators- it's a tough job and often a thankless one.

Sounds like what we had a good week ago.... it is a lot of work and really sets the mind back when you are thinking green spring! This past week we have had below 0 weather - today we have 26 degrees F so hopefully we are getting warmer. Have a great sunday resting & staying warm....

Oh I did here about that terrible accident and my thoughts are with those families who had no idea that was coming.
Nice calf and they do come when they come we have about three stragglers and I am kind of glad we are done it was a long winter. There is still snow on the ground and yes someone says an Alberta Clipper is coming tomorrow could you please keep them in Alberta:) Spring will be here soon though and I look forward to lots of moisture in the ground and hopefully a good crop of hay this year not like last year drought. Take care and rest while you can. Hug B

I couldn't believe the amount of snow you guys got when I watched the weather network and the accidents oh boy not good at all ! It is finally showing signs of spring here in Southwestern Ontario no snow left temps and sun getting warmer but the winds still carry a bit of a chill . Sweet little calf , hope all do well ! Have a good evening !

Yucky! I am sure glad I was gone when that happened. We got a tone of snow too, and our grader guy spent 5 hours clearing our driveway! I am so glad he did so i could get in the yard, Neil was stuck at home till he came cause he got his tractor stuck while trying to get out.

Holy cow! I saw the picture you posted on Facebook. That's something bizarre you'd see on a tv drama like Grey's Anatomy, not something of real life. So glad that there weren't more fatalities!

Sounds like a good time to stay off the roads and snuggle up on the farm.

Wow Sherry! I cannot even imagine how difficult that much snow and cold would make daily life, especially with livestock. That picture is horrendous! Like that other gal said, it seems like something you'd see on a drama tv show, not in real life. Glad to hear it looked worse than it actually turned out to be, in terms of lives lost and injuries. Cars can be replaced. Yes, praises and thanks need to go out to the early responders and plow truck drivers. Those people are invaluable and under-appreciated for sure. Will keep you all in my prayers, and hope for spring to come in your neighborhood. We are mild and feeling blessed weather-wise, which is pretty common despite my complaints about too much rain and mud at times. I need to remind myself to count my blessings. Stay safe and warm my friend.

We had the pleasure of sharing that storm with you. On the radio they said it's a sign spring is on the way **snort** All I can say is I hope it is, but I hope it's a slow melt.