Wow, a week already, and no blog post!!! oops! Busy busy I guess.
The anniversary party went very well, we had a great turnout and I think all enjoyed it . My niece Deana, did a slide show of photos through the years and that was a special hit. If I can figure it out I will share it sometime soon.
Otherwise it has been business as usual , calving is going along well for the most part, the snow,is painfully slow melting away but it does seem to be finally going . 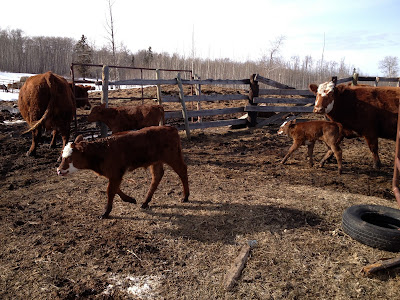 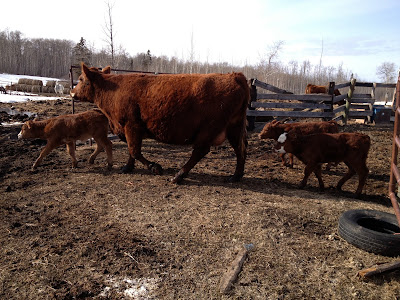 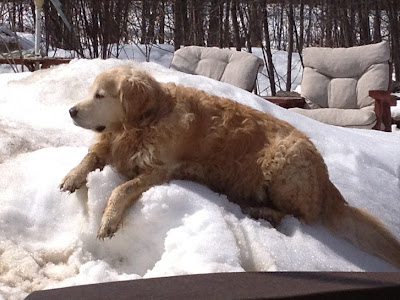 I posted the above shot on facebook the other day and it appeared to a friend that Winston was laying on a table . But really ... 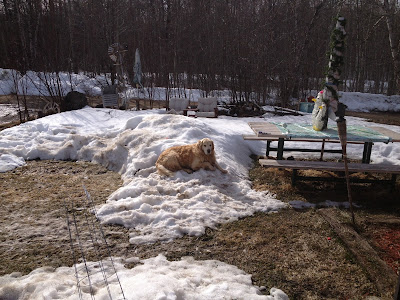 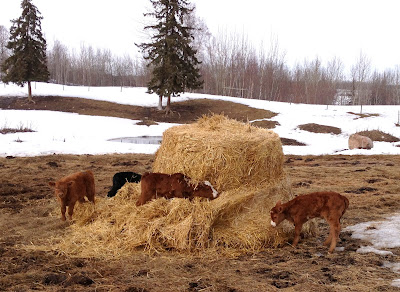 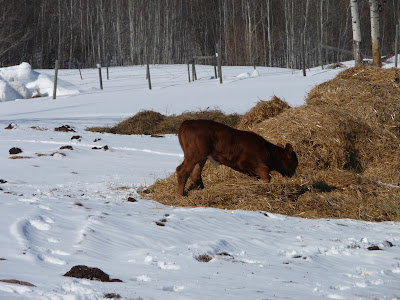 We have one little hiccup, a calf  born on Saturday in yet another spring snow squall. He was one cold wet little dude, the neighbor  came to help be bring him in to dry shelter and I had to tube feed him twice  before he seemed to be OK. But after a day or so ,even though he seems to be nursing ,he looked a little sad and droopy, so I took out a bottle hoping he would take it, take it? he leaped  up and darn near  chased me around the pen for it , got him on mom again but still seemed like he was not getting enough , so we brought them both in. She does have some  milk but not really enough so we are supplementing him for the time being .Which is where the helping hands come in.
We had a special guest here yesterday , in the  form of Emily,my newest honorary niece(as I puff out  my chest in pride at all the wonderful children I am blessed to have in my world) and her mom Amber to help feed the calf. I just love the smiles! 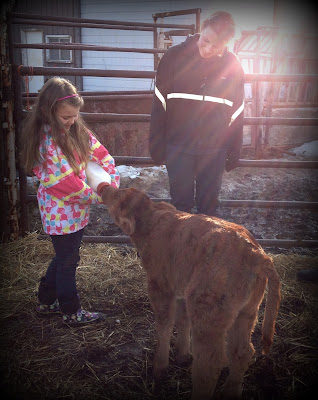 So  as I said things are going along. Next week I will be packing up and getting ready to head to the Mane Event  But I hope to post at least a couple times before that .


That's whats up in my world these days , hope everyone has had a good week.
And as always , stay safe my friends.
Posted by Sherry Sikstrom at 10:45 pm

Must be rough being born in a snow squall. Glad he's doing good on the bottle. What fun to be an honarary niece at your place!

Oh I have a little experience with bottle feeding temporarily remember the name "Annie":)
I am so glad the party went well but I knew you would have a great time.
Calves and spring what more could a girl want? Take care Hug B

Yeah for sping!......I hope. It's raining here this morning but I did hear frogs last night for the first time. Hang in there.

Sounds like all of your helping hands really enjoy it. Being a city girl myself, it sounds like a lot of fun.

Love the pic of Winston. He looks so comfy. I hope it warms up there but not too warm it too quick. Lol

Love the pic of Winston. He looks so comfy. I hope it warms up there but not too warm it too quick. Lol

Yay that the snow is finally melting. Glad calving is going well.

well, you are just a TAD busy in the springtime.
Thanks for taking the time to post.

Emily is growing up so quickly! And beautifully :)