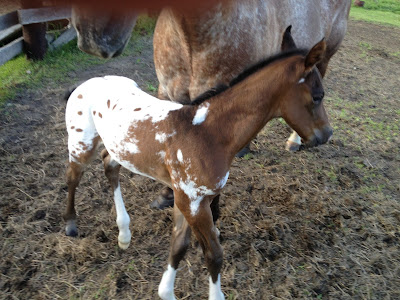 Well actually , my "FV Rainmakers Quest" or Maks as  we  will be  calling him . 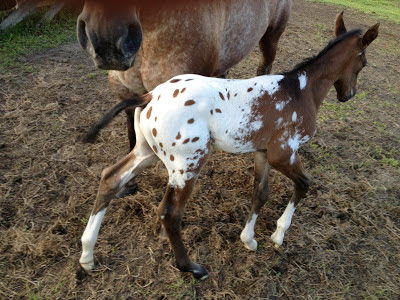 Another  angle  so  you can see all his spots, or at least more of them, there  sure is a bunch!
So the name  suggestions  you all gave me  were great,and I really appreciate the input . Jackpot is a name  I used  for a foal of Richie's  BB (before  blogging ) who sadly  was  born  with a ruptured  bladder and  did not survive.I may  use  the name again some  day but am just  not there  yet.As  for the S names , I just  could not  get one that hit me quite like  this one. Maks  is a grandson of DVS Dream Maker (son of the  great Dreamfinder)  on his  dam  line , and on his  sires  line a bit  further  back a descendant of Top Quest (follow this link to see some of the loud coloring he had!) So his  name  does  fit as an homage to his  heritage.The rain part? well the poor kid  was born in a rainstorm and on day 3 of his  life I think  he  has  only seen about 18 hours of  totally dry  weather(he does have a shed ) .Central and  southern Alberta was in the throws of a huge tantrum on the part of  mother  nature today with severe weather  warnings and Tornado  warnings all around.Here  was mostly  just rain and Thunder but Edmonton  was  under a severe  watch and I believe  south and east of the city  did  see funnel  clouds 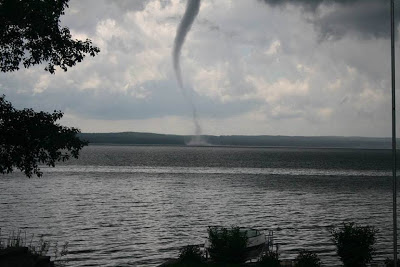 (credit 102.3 Now! Radio')
And  this  photo  was sent in by a listener to a local radio  station  from a listener  at Pigeon lake , it is a water spout  less  dangerous  than a  funnel  cloud  or a tornado  certainly, but another  example of the power of  nature.
And finally , my brother in law  Marc  was the one  to first meet the little man , while out  for his early morning walk  with Mac  his  westie so they too get a nod in Maks' barn  name .
There you go , its official .so now  you just have to bear  with me and the deluge of  baby pics coming your way till the next  foal arrives. Then they will double and so on and...
Stay safe  friends
Posted by Sherry Sikstrom at 10:08 pm

Okay, every time you post a baby picture, I get this uncontrollable urge to hug a horse!!

What an adorable baby!!!

and YOU stay safe!! Storms are scary!!

Now that is one seriously beautiful baby .....what beautiful spots......and what nicer way to open you blog and find your post as the first one with such nice news...as a new baby
Stay safe in those storms!!

He is a beautiful little guy. Weather here has been hideous; bad, bad storms last night. Stay safe and dry!

Mak's is beautiful.
I heard about those funnels where you are scary. Glad everything is OK. B

Wow - he is a handsome guy! I really like his name too! I sooo want to buy him. Except I have no spare $$ for a horse and I'm a bit far away. lol

It seems to be hard to find nice appys around here anymore.

Hopefully it dries up for you soon. We've had a wet spring too!

Oh he is such a handsome boy and cute to frolicking around ! Yes we have heard that the weather there is nasty . Be safe ! Thanks for sharing . Have a good day !

Be careful out there, FV.

We were laughing on FB about Ici's mane, I just couldn't figure out when you'd had time to band her mane ;)

What a gorgeous, SOLID mare.
What a colt.
wow.

Ha ha the little guy brought with him Dreamfinders color!! LOL LOL
He is related to my Emma to, she is a granddaughter of Dreamfinder.
He sure is pretty!!!

He is a gorgeous colt and I think the name fits him well.

Stay safe and keep posting pic's when you can. I doubt any of us will mind. lol

Love the name and the little fella!

It must be so much fun to see the new babies each year.

This is an outstanding colt! Love the name too. More pictures is what we all are hoping for- keep 'em coming!