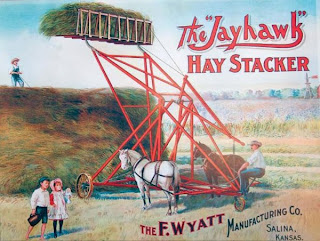 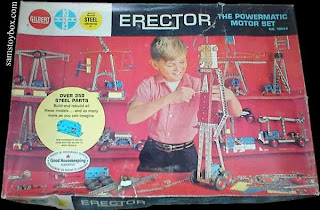 Posted by Sherry Sikstrom at 10:05 pm

Absolutely wonderful how necessity becomes the mother of invention. I love reading these stories....

Interesting history on such a useful well thought out machine! It was clever to build & test a working model with the Erector set. Do you still have the mini version?

Such interesting people your family and smart...easy to see how you take after your family. I am looking forward to # 3 and "The Thing"

I love this series - fascinating history!

Just as fascinating as the first post. And to use an erector set to practice on? Brilliant.

Very cool!!! I have been trying to explain this to my father in law, might have to print it out and show it to him...much better explination that I was giving.

Fascinating! LOL, I cannot WAIT for the Thing!
This made me LOL too, especially knowing how farmers tend to understate, rather than overstate. "We used Haymobile for many years due to its extra strength and stability even at high speeds." 45 mile an hour?! WOW. You guys built it right!
Yes, please, record as much of your memories as you can, this history is priceless.
To everyone!

When I saw the picture of the erector set I thought he was going to talk about how that got him interested in mechanical things as a child, not that he used it to help him design things as an adult. Looking forward to finding out what "the thing" is.

THANK YOU, THANK YOU FOR WRITING THIS DOWN. Seriously. So interesting!

Thank you Mr. Horrick I truly was spellbound reading this I do believe more parents should get there children an Erector set because it certainly has the ability to make young minds dream and create and that is such a wonderful thing.
The Jayhawk is fascinating but your haymobile is incredible.
I do believe there are many many young men and woman even in this generation who can build and create and they need to know these stories so they can be passed on and know nothing is impossible with an idea a little work and dedication. You and your brothers and your father are inspirational. Thank you so much for doing this series.
I look forward to "The Thing" B

That's quite the build! Very effective from the sound of it; love how they reversed everything on the truck; using the material at hand and making something special. Lots of lessons here for kids these days! Bring on "The Thing"!