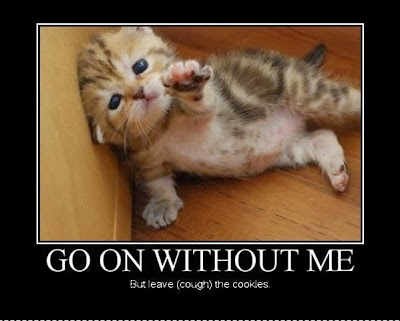 Sending well wishes .
Take good care of your self , and get well soon.
Happy Holidays ,
Willow

Oh take care of yourself the chores cannot wait but if you are like me they may take a little longer then a nice little nap after. Take care OK. Hug B

Well it's good that you are getting this over before Christmas! Hope it doesn't last much longer.

Oh no get well - not a good time of the year to be sick (it is way to busy) Holidays are a coming!

Sucks being sick, I hope I never get that sick again. But what else to do but nap the day away getting better, I think you got it right. Get well soon !!

I hope you feel better soon!!! Being sick is no fun at all... Hopefully you are better by Xmas!

Take care of yourself & feel better!

I'm sorry you've been sick Sherry. It's just awful because it seems like you not only feel horrible, but guilt has a way of washing over about not going to work, and doing everything that needs to be done every day. Bad deal. Your little kitty had me smiling, and I needed a reason to smile today. Thanks! Hope you're back in spades real soon.

I saw your FB posts about being sick and missing work so I KNEW you had gotten hit bad. Sure hope you're on the mend now!

PS - I love shortbread! Any chance I could talk you into making a batch whenever I manage to come visit? Even if it's summer? lol

I hope by now you're feeling a little better. There has been some nasty stuff going around here I know. Merry Christmas to you ♥