No idea what to call this post, seems to me it is about too many things to give it just one title . Maybe I need to get back to posting more often...
We had a busy week  and the "signs post " remains on the back burner. Before I knew it the weekend was upon us!
Friday was trip to the city for me to see the doc(rheumatologist) . Seems overall I am doing well . He laughed at me a bit because while I was waiting I was reading a chart on arthritis in your hands ( which I have to some degree) on the back side showed a set of exercises to do to keep the finger joints mobile so was practicing those when he walked in. Doctor Skieth said that was the first time he had ever interrupted a patient  doing them! (oh well they cant hurt right?) As I said ,he feels I am doing well overall, but is concerned with my elbow, decided to try a cortisone shot again to see if we can postpone a surgical intervention. Now I don't like the shot ,but the idea of surgery doesn't really appeal either so I agreed to give it a try. a moment of "suck it up sunshine and take deep breaths " then the freezing kicked in. Hope it works , feels pretty good today so maybe...

Friday evening we had to haul one yearling heifer  down the road to a friends and bring back our yearling steer.Dad and Deb were here to help load, and Deb traveled with us as well . A little hiccup in loading the heifer had me getting boosted up and knocked into a panel, but no major issues , just a couple sore muscles. Loading the steer went much better, and i was barely involved ,spending time instead talking to the parents of my friend , who had  raised Appaloosas many years ago, and are getting back into it and may breed 2 of their mares to Cactus.
Saturday was time to immunize and process our little herd and turn them out on to grass. Our crew consisted of Martin and I,Kyle,(cousin Alie's sweetie) Sister in law Connie , nephew Cory, and little Miss Abby to cheer lead. just a few to do so we were done in no time and had a great lunch and visit . Kyle did have his dog along a farm raised Blue heeler Husky cross ( I teased him she was the perfect cross, could herd cattle straight to the BBQ! ) We did let her try and overall she did well,but got a little too enthusiastic, so we called her back and let Skeeter do his magic!I don't know a whole lot about training dogs but what I do know is you MUST be able to call them back  and you can with Rosie so it was all good. I did notice Skeeter hung back until we called her out. He seems to know too many cooks spoil the broth so to speak.
NO pics of the process,but I did get a few of the colts. Didn't get to watch the Preakness either till later on you tube,but we did have a little race run here ! 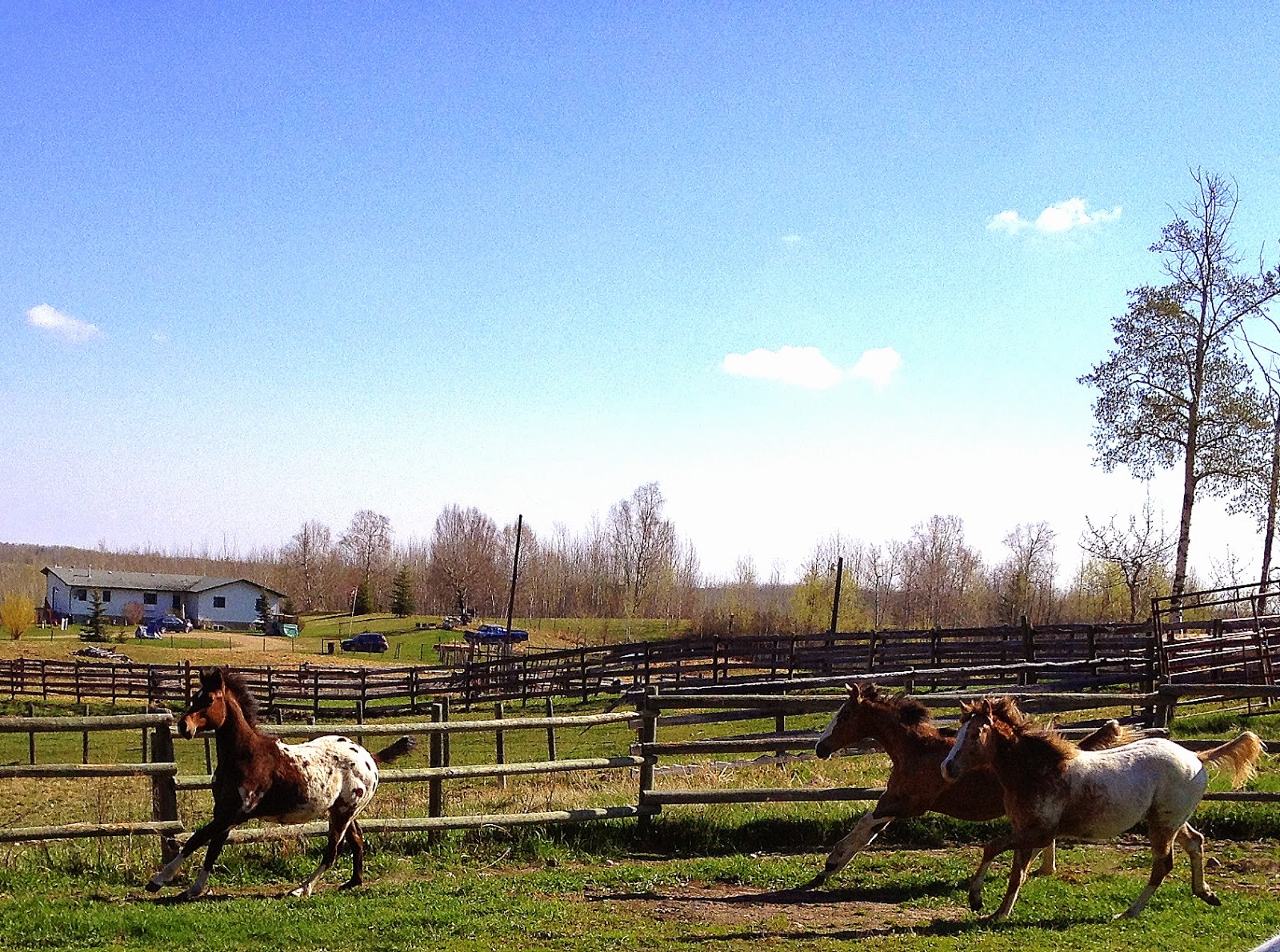 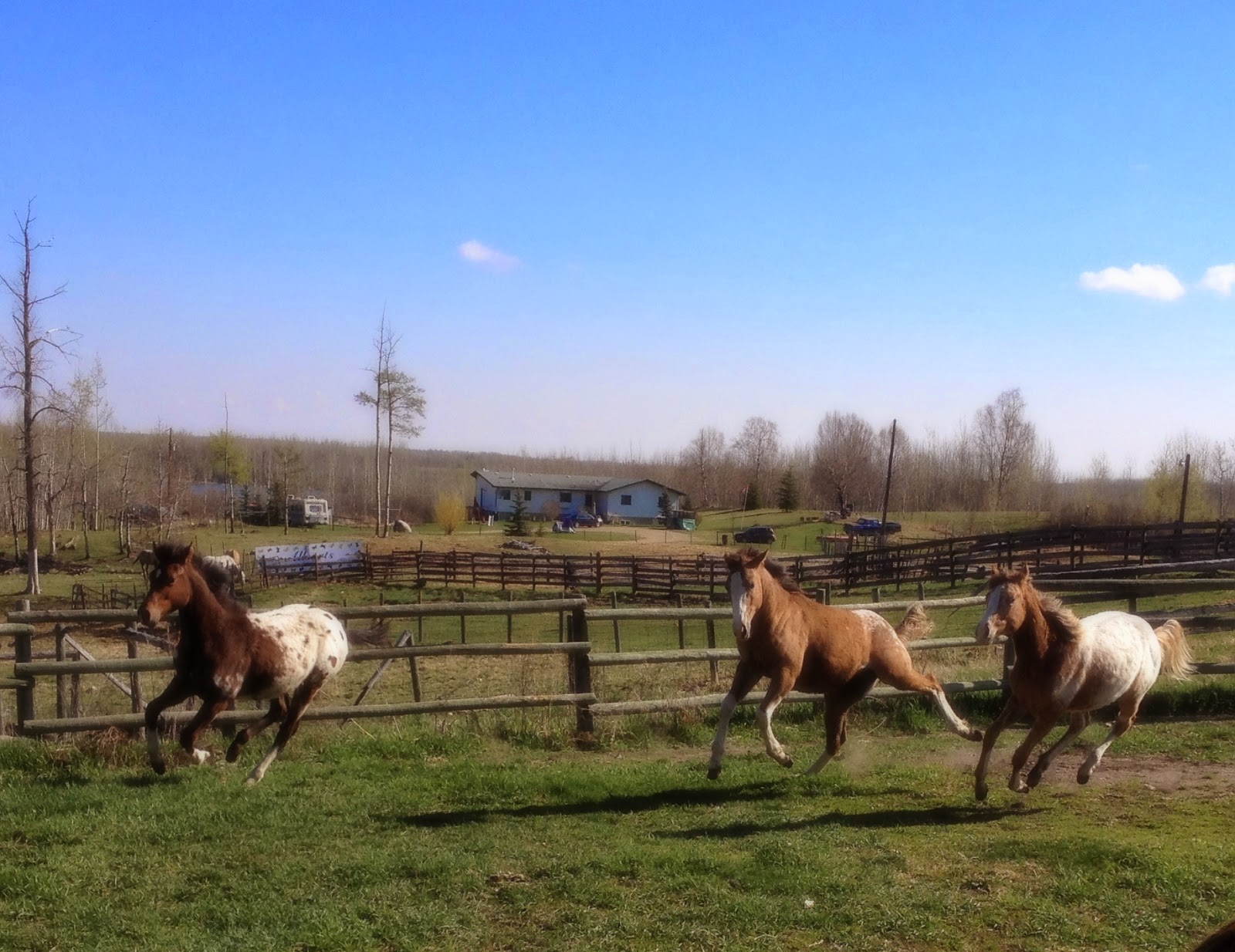 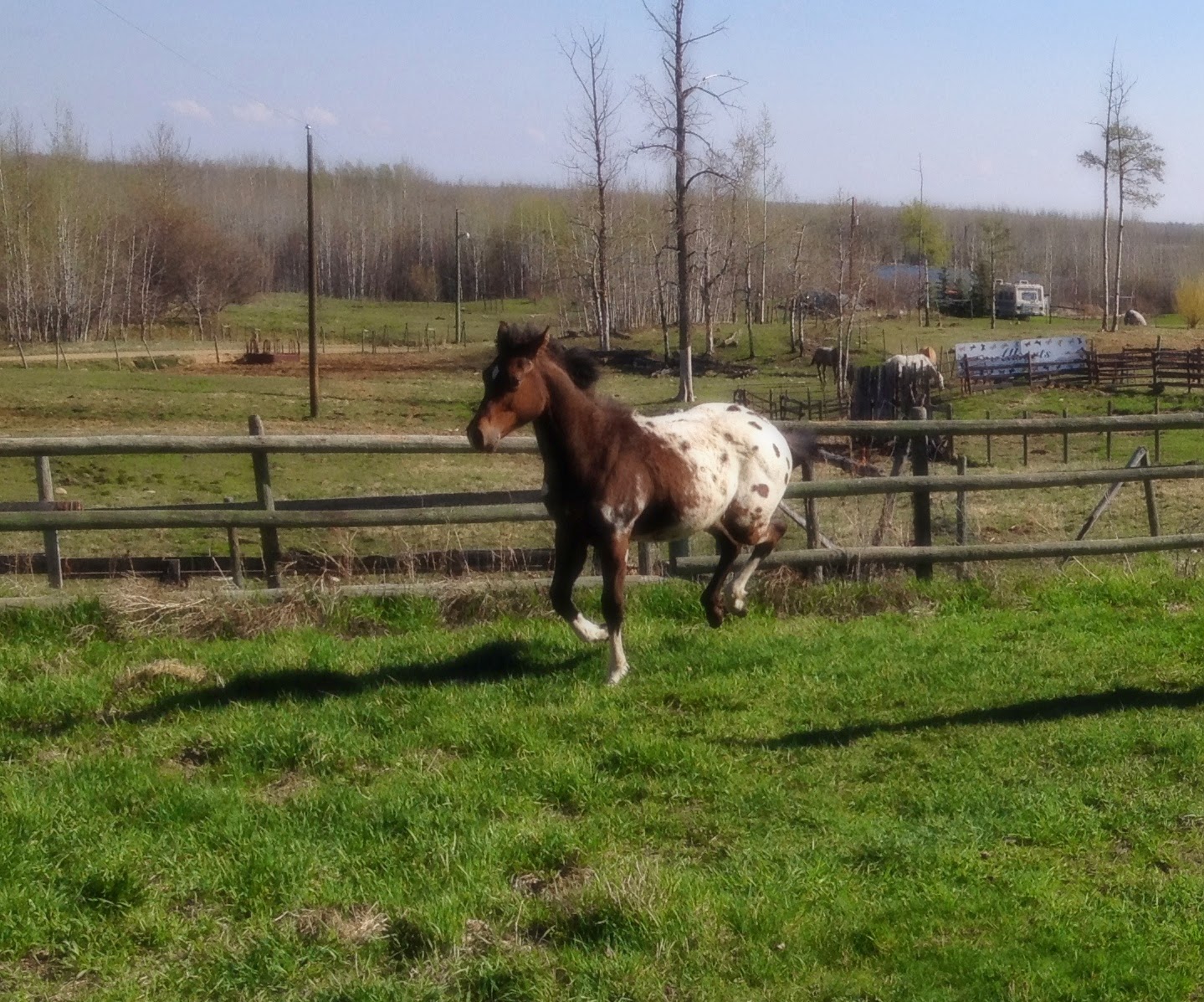 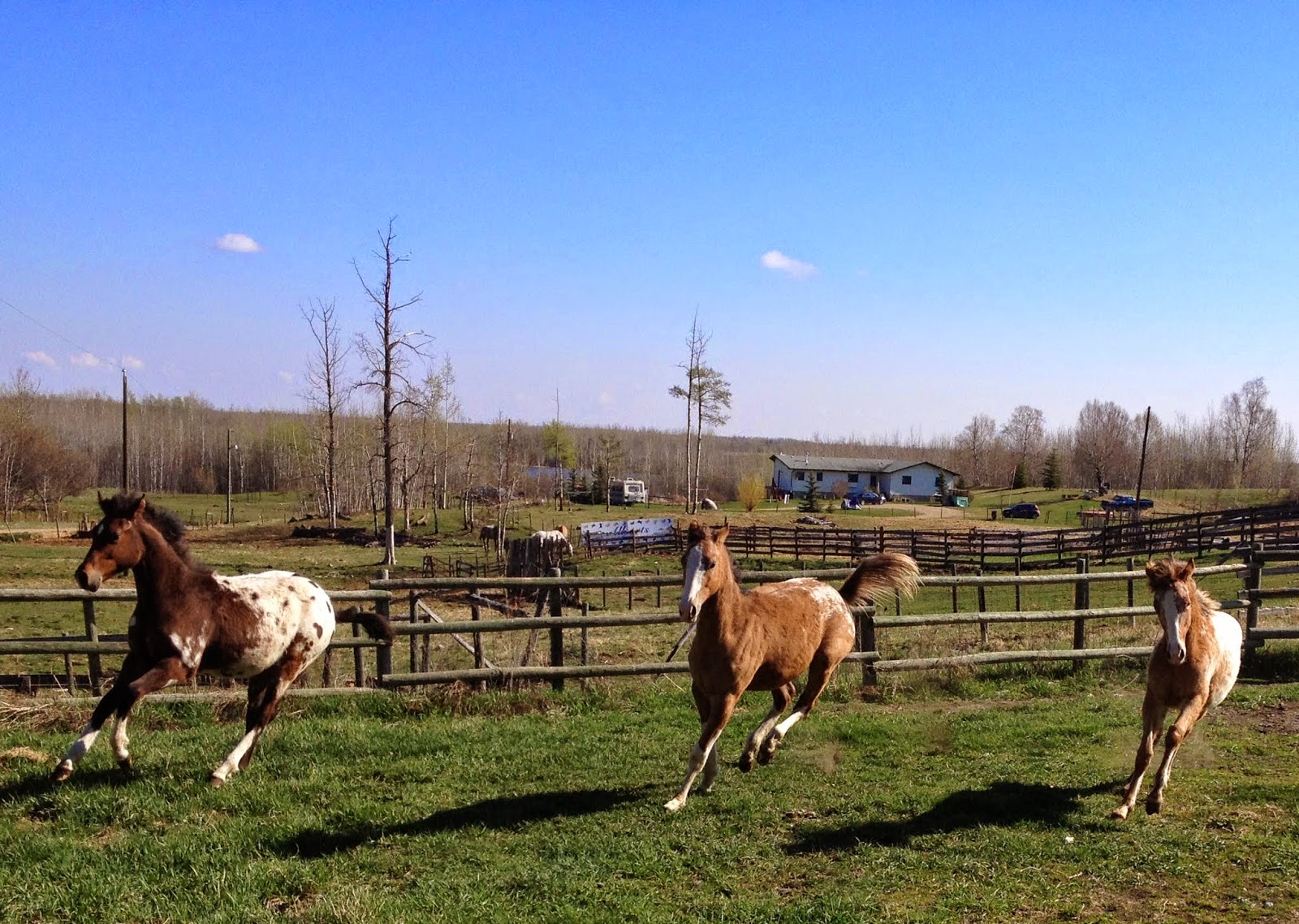 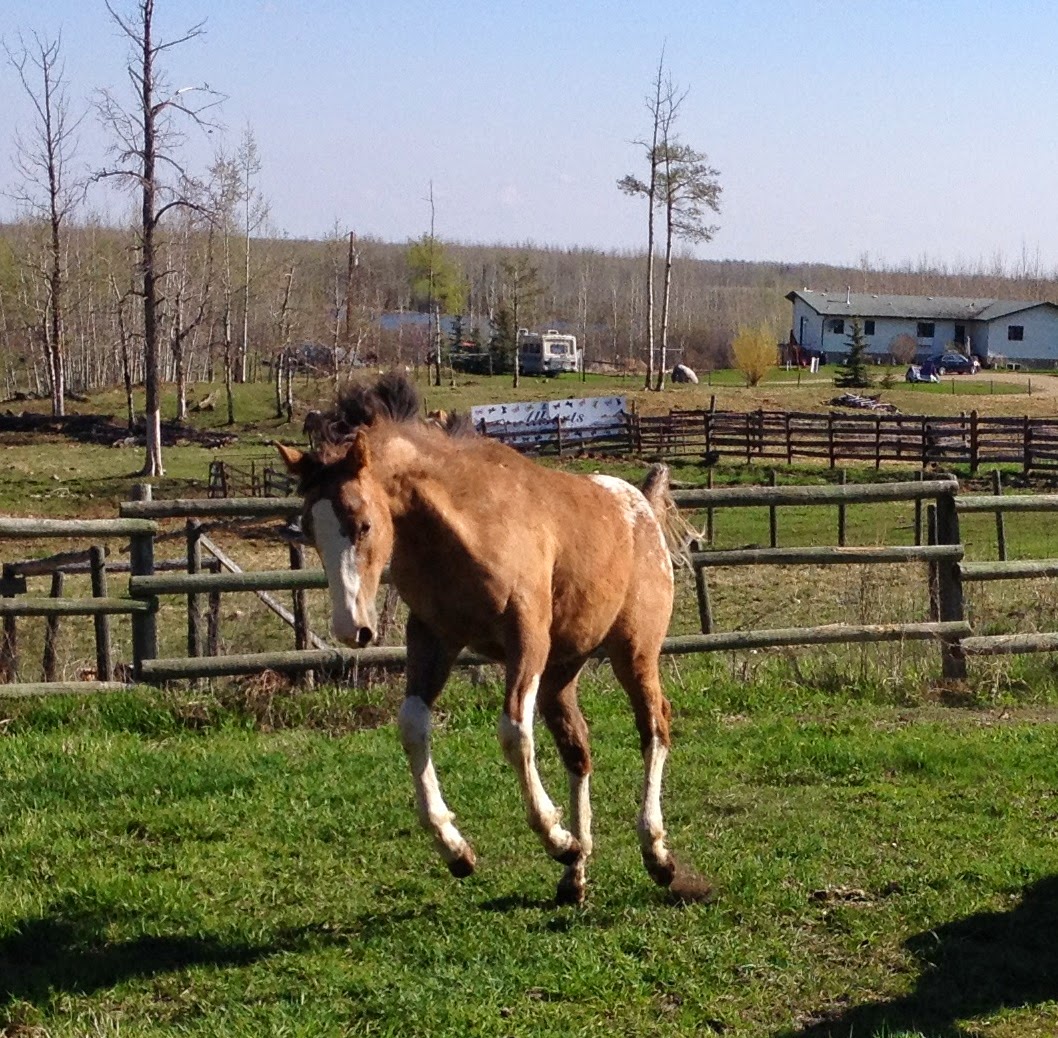 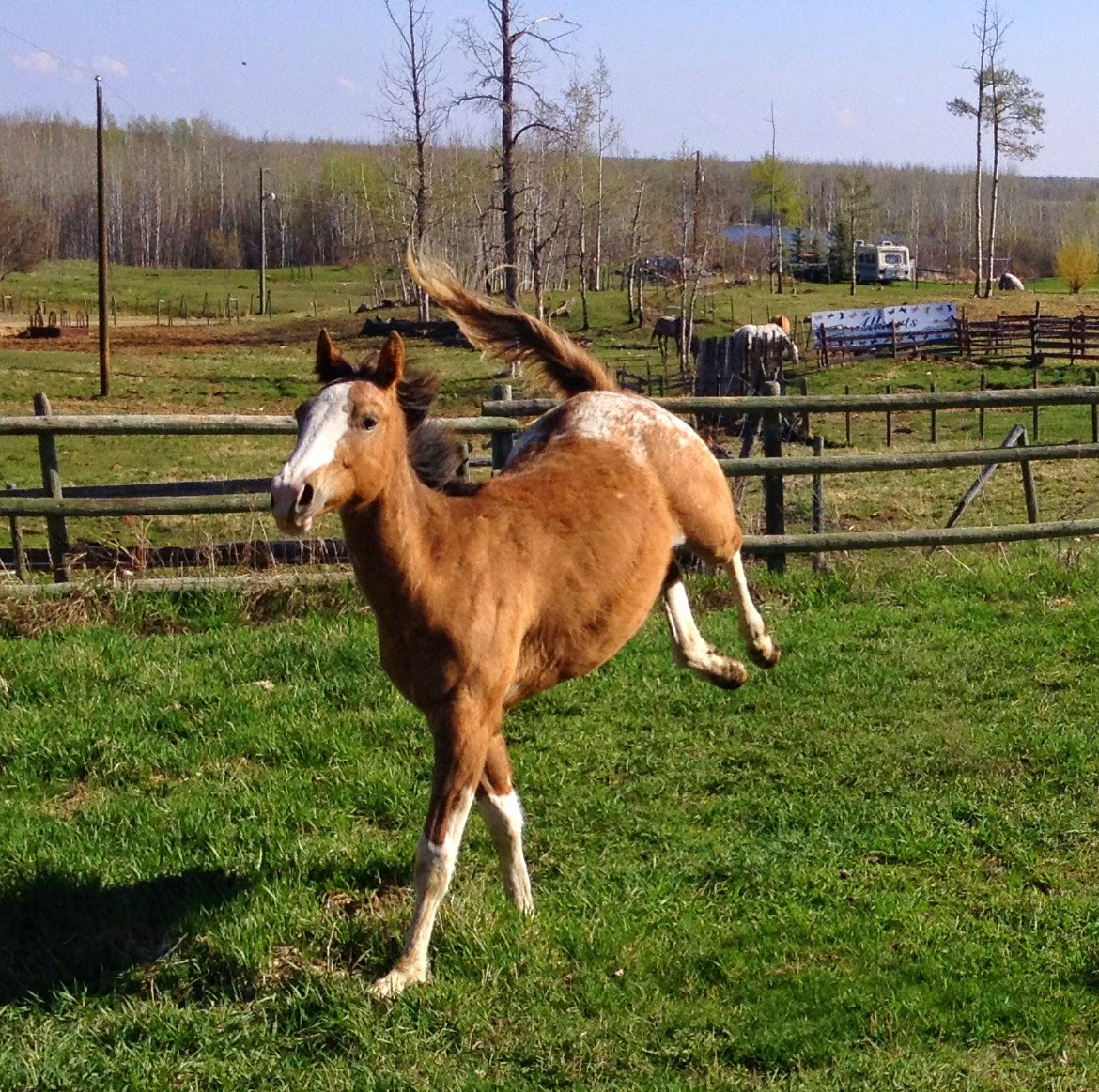 Not California ,but we got Chrome!

Today was all about my yard  to star, I mowed the lawn ,trimmed the roses, did the edging, weeded a bit in the flower beds,then with the help of Deb and Brian ,set up my fountain I got from moms yard . Will add pics later,It looks very pretty. Also have a Ogo Pogo, or sea monster ornament  made out of concrete  from mom and dads  garden here at least for now until my niece has a yard to put it in. Set it up as well .

Then with some encouragement from Deb and Brian  Martin and I went with them in our Gators(ATV) out to the fields to check fences and see how much  damage the beaver have done (we are really struggling with them damming  watercourses in the county, we and several others have had  roads wash out over the past few years, and nearly lost access to our stock. The County has been  pretty good about helping clear  culverts but its a never ending battle . Hers is what they have done in the far north east quarter . 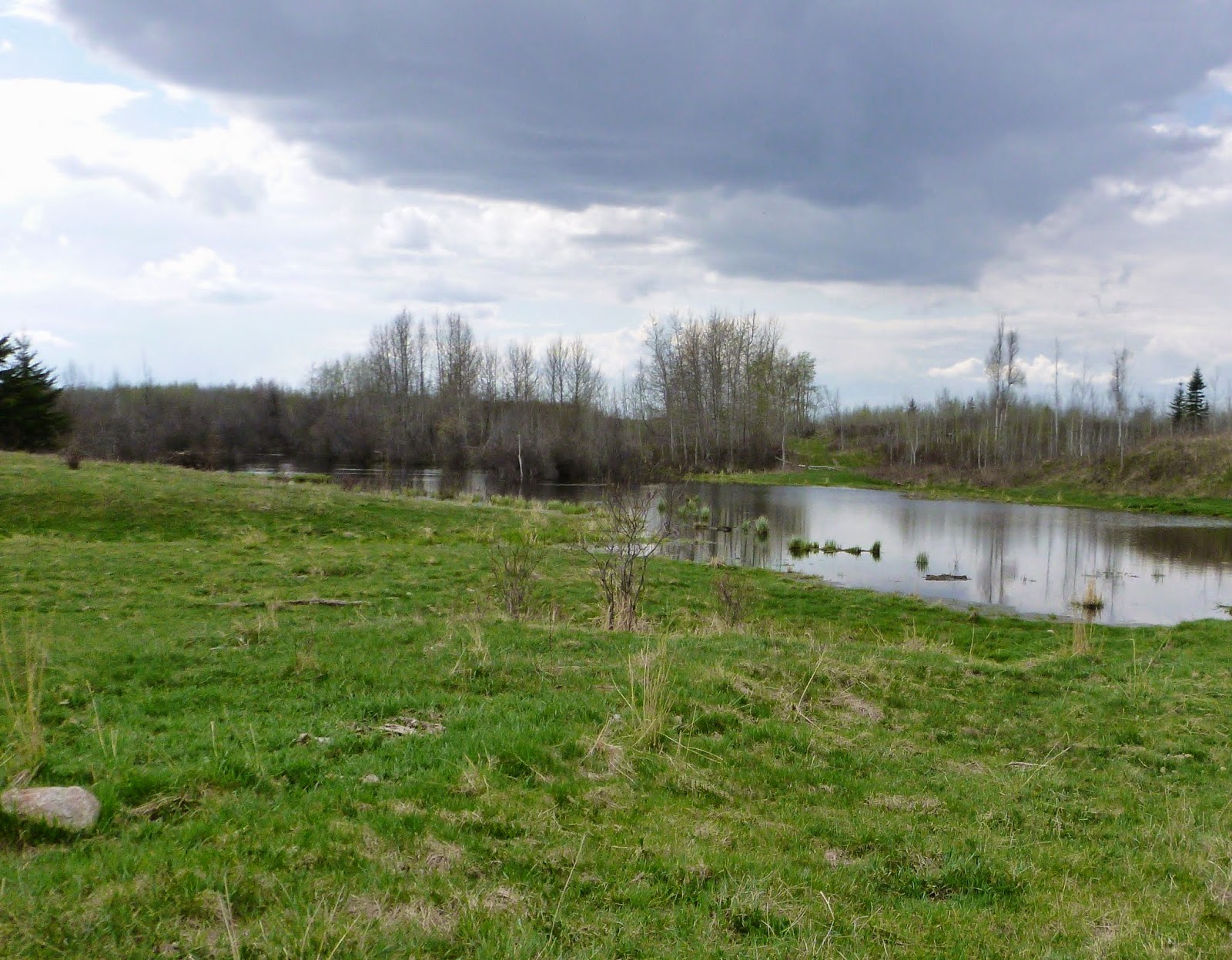 Alll the water is covering where there is usually only a small dugout and  grass, in the center if you enlage the pic you can see the trail leading straight into the water 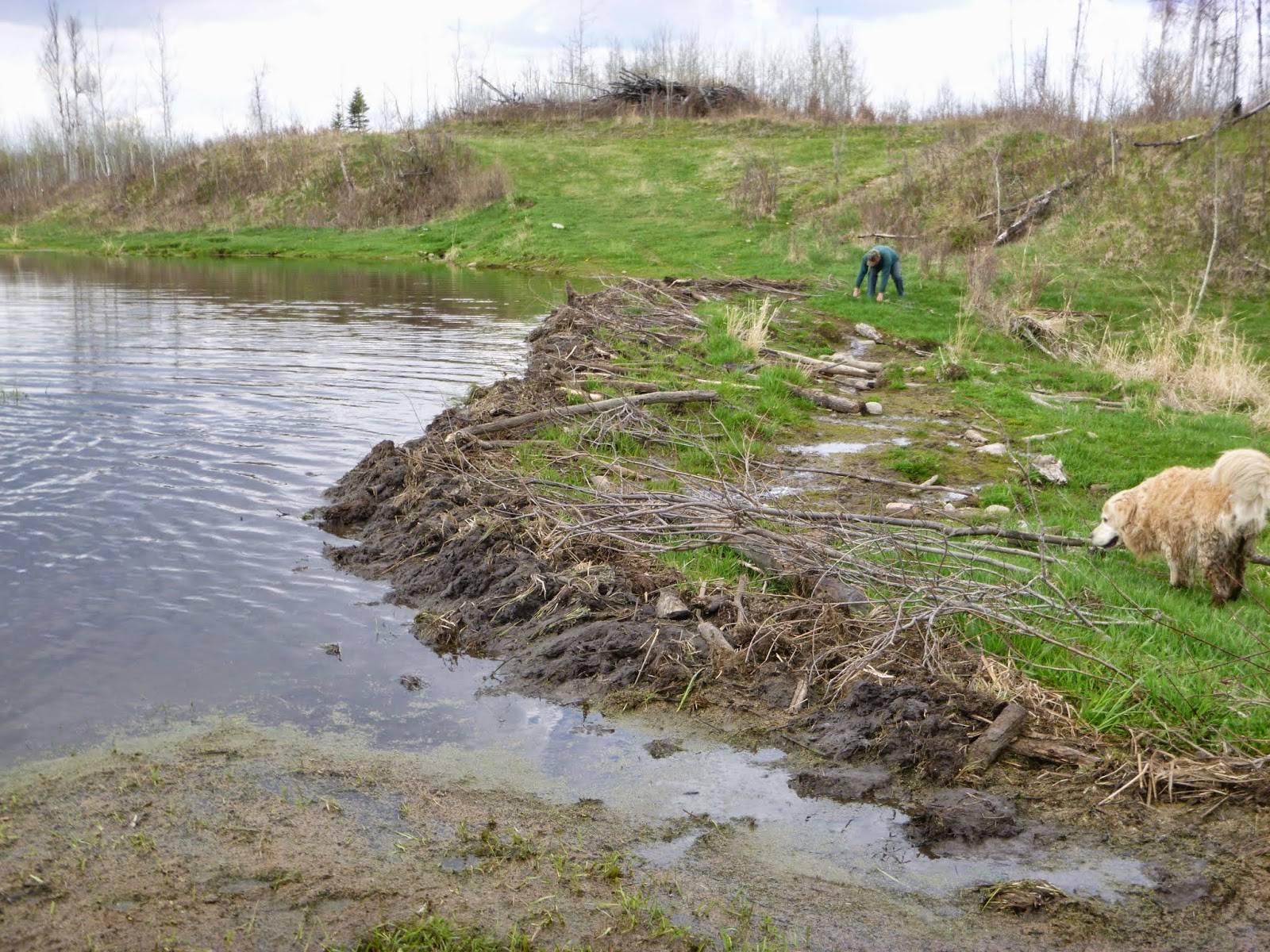 Where Brian is is the second  road/trail that led to the area I was standing , impassable as the  road is totally eroded along the edges and covered with trees , a person could pick their way across ,but I would be hesitant to even try with a horse . 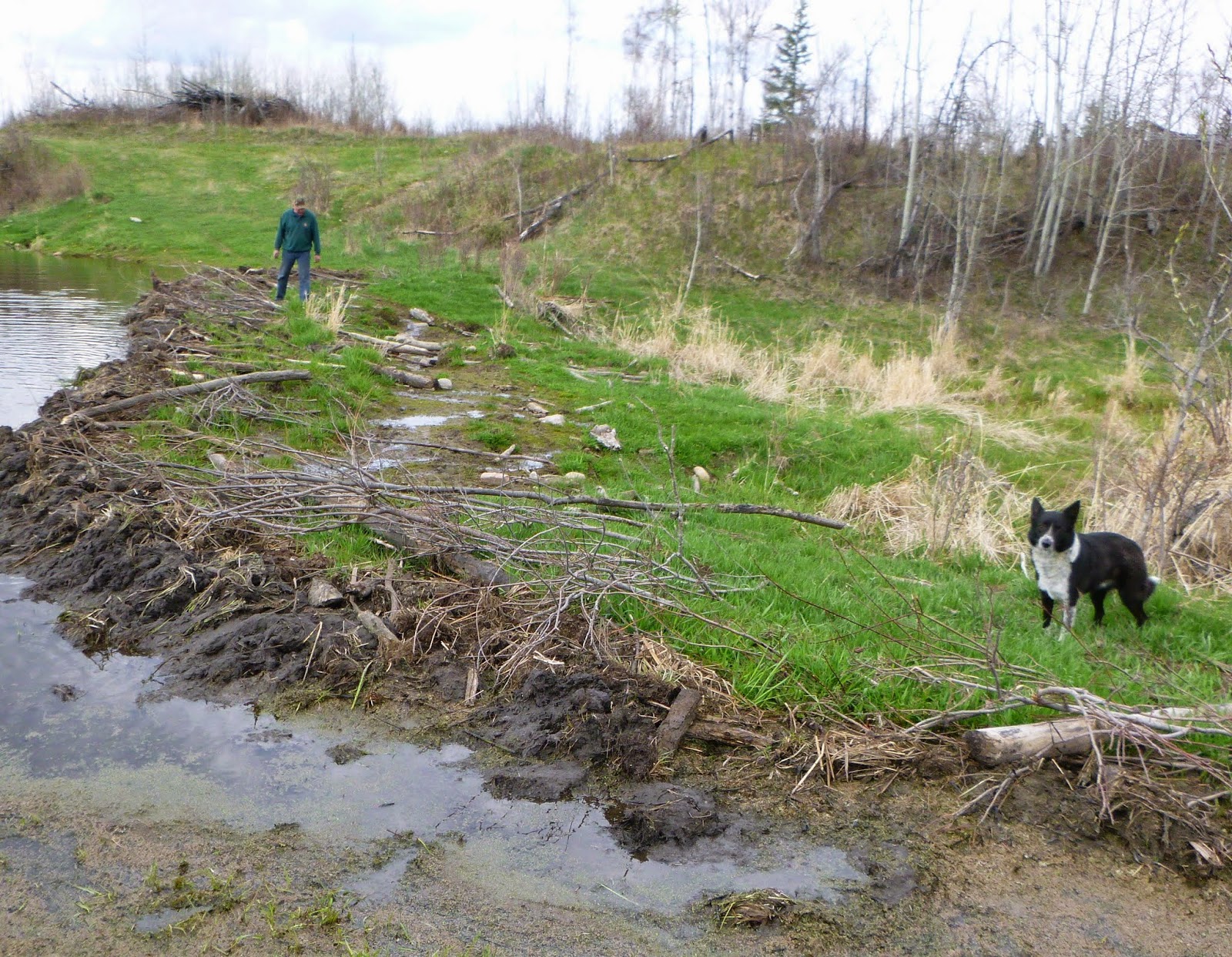 Skeeter is horrified that he may need to get his feet wet to get across! 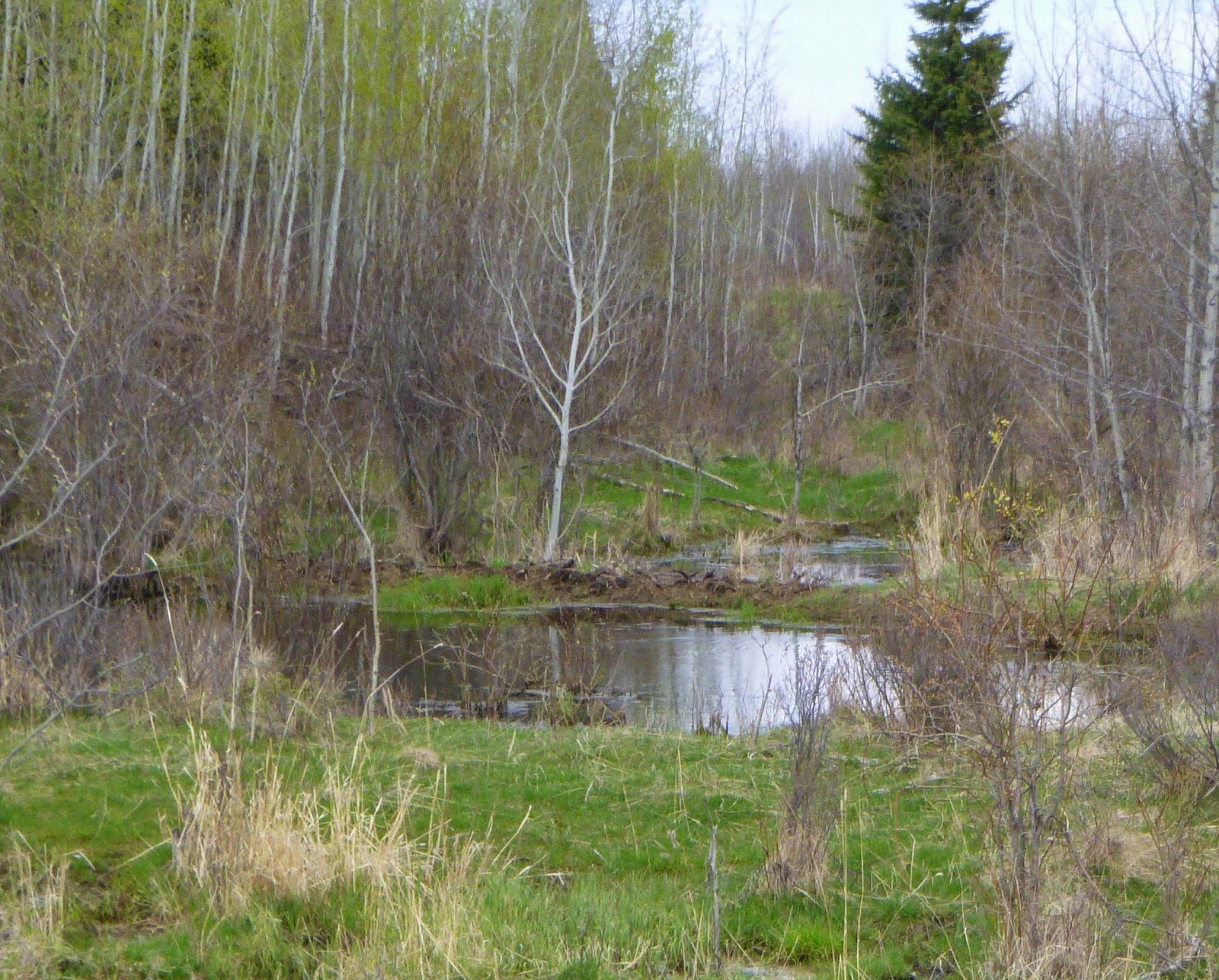 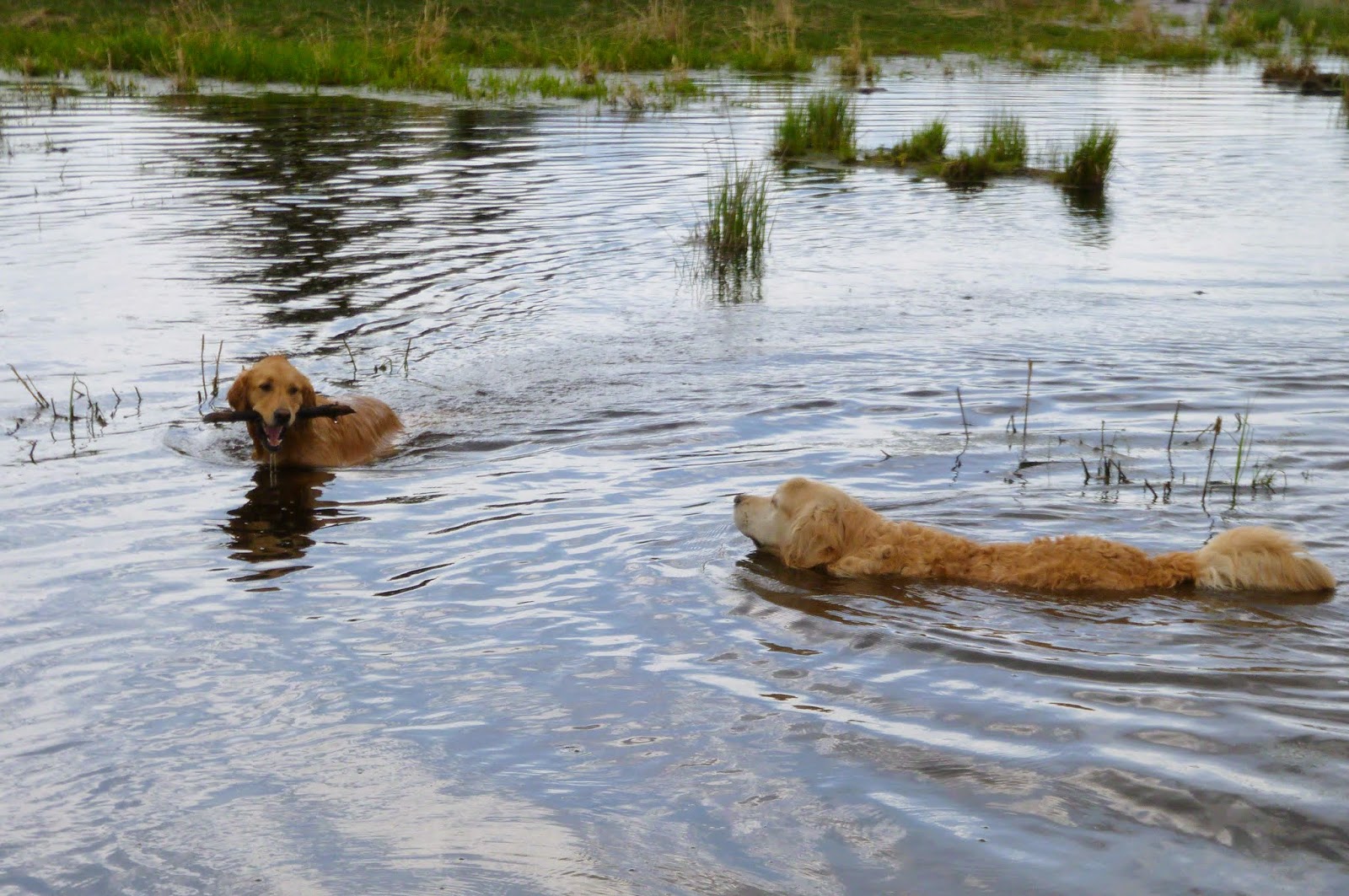 Winston and Autumn , taking advantage of the new "pool" 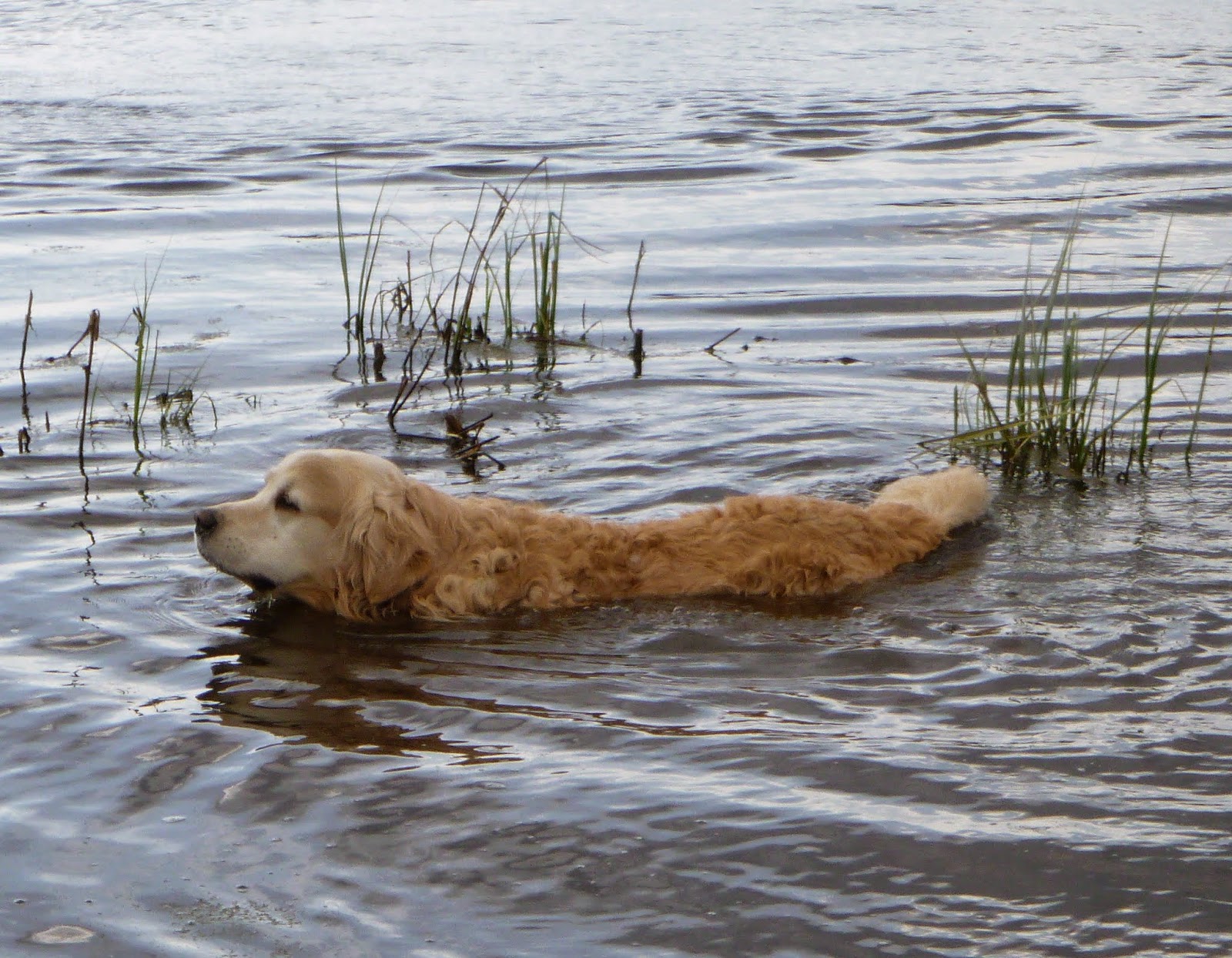 This is not such a bad situation as there are several other ways to get around this quarter and it has a great deal of high ground ,but still the amount of water there is startling!
After all that ,shared supper with Deb and Brian and called it a day . It has been busy  but a really good weekend overall. Will be sad to take Martin back to the bus tomorrow .
Stay safe my friends
Posted by Sherry Sikstrom at 11:26 pm

Sounds you had a wonderful weekend. All your pictures are good.

As always, so wonderful to get a glimpse of your amazing life! Thanks so much! I hope your elbow is better soon...and those fingers! My dad is about to have surgery on his back for arthritis...I know how painful it can be from him...
Many blessings from Greece,
Melanie Ann :)

"Boosted up and knocked into a panel", that probably did not help your health woes and your doctor need not know about that one:) I understand this one.
Wow that is a lot of water hopefully it will recede soon beavers do that a lot don't they. Have a nice week my friend. Hug B

Water can be so destructive! When the weather warms it's go-go-go, short time to get a lot accomplished. Looks like you did just that. Enjoyed your photos!

Good thing that heifer is gone....
You have indeed been busy but a good kind of busy. The yearlings look terrific, hope you find good homes for them this summer. I'm partial to Maks!

Sounds like life as usual around your place. Pack a lot of stuff into a short amount of time... I finally had a weekend with nothing going on and got to relax. You should try it sometime. Hahaha!