Well finally we had some beautiful weather (not complaining too much about the rain,it makes things grow ) but for the weekend at least sunshine was definitely in order.

Saturday was a special day for myself and a few family members, we participated in the "Spring Sprint" which was a walk/run in Edmonton and many other cities across Canada to raise money for Brain Tumour research.
Now anyone who knows me well,knows I don't run, or not often . I have been known to say "I wont even run from a fight" But I do walk, and walk I did. Along with and in honor of my cousin Kirk, who has lived with an inoperable brain tumour for several years now.Kirk is well  right now and I pray he remains so but I was proud to be a part of the team that raised money for this important research and hope one day we can look  back say Kirk had a brain tumour but he beat it . Team Horricks ,is pictured below Kirk in blue, his  wife,Amber, his 2 sisters Wendy and Kim, and nieces Kandace and Alie, and I  in my snazzy new rainbow shoes with memory foam soles!On each shirt there was a place to put who or what you were running for. I tease Kirk a lot that I only sort of like him sometimes ,when the truth is I  adore my cousin so I simply had printed on my shirt I was walking for love. 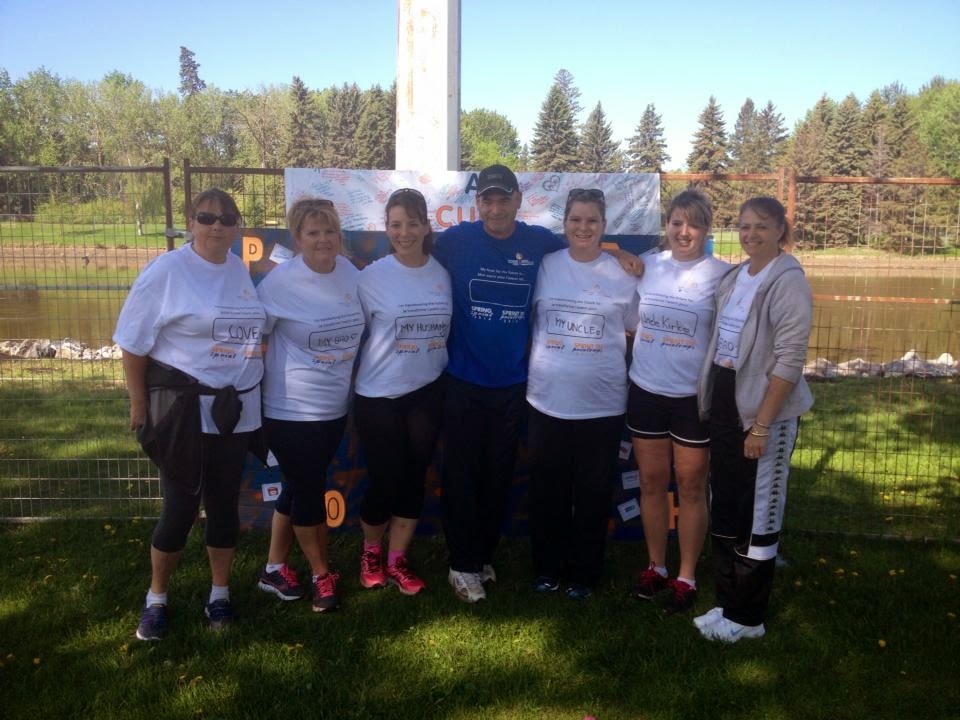 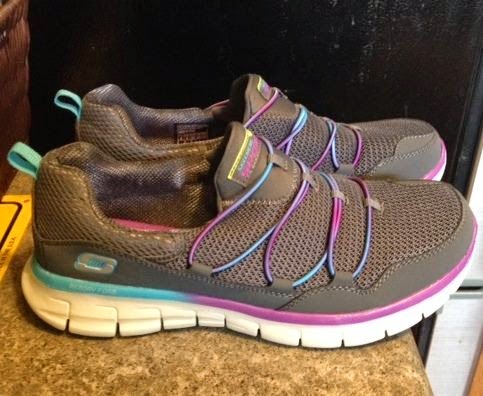 Home after lunch and I had some yard work to do, mowing the hayfield that my lawn had become and doing the edging before heading over to Kirk and Amber's for a BBQ . Mom and Dad joined us for supper, and with the bright sun mom had to borrow a hat. I swear there is not a hat made this lady does not look good in! 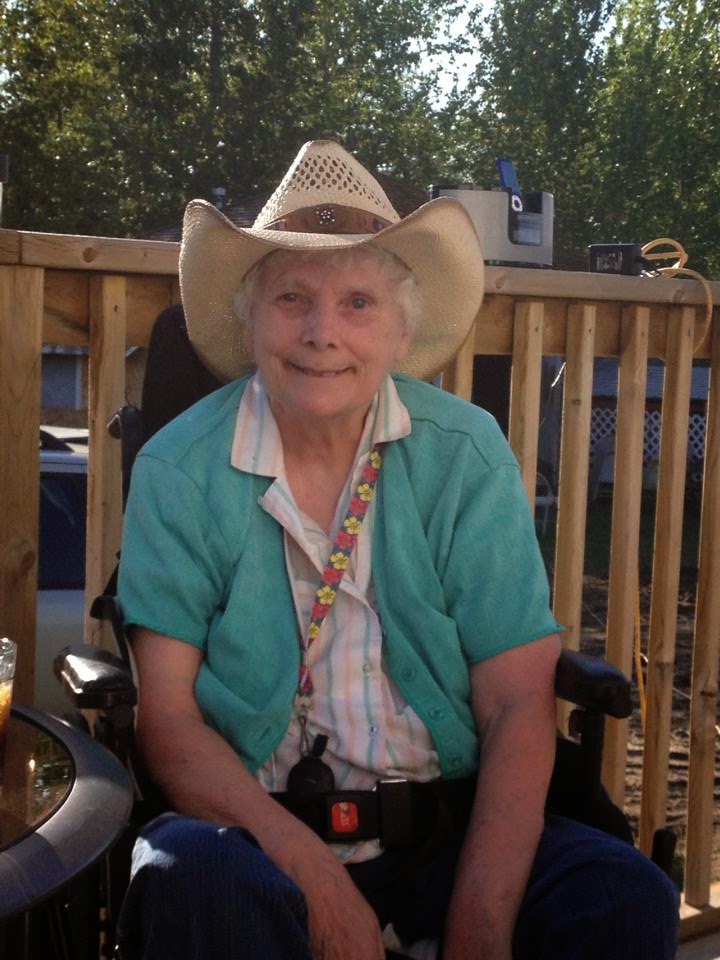 Rockin' the cowgirl hat! I cant figure it out she can wear a floppy sun hat,ball cap,all the fancy ladies hats, and a cowboy hat and make it work.Me? a ball cap, or my granddads old tweed cap, that is about it.A cowboy hat and I look like a female version of Hoss Cartwright!
Today was a quieter day made up of housework, and a little more yard work, I put my new gazebo topper on (the old one was ripped by the wind) Its is a really pretty reddish rust color, I will have to take some pics of it soon. Then out to the pasture to show the renters where their cattle will be going tomorrow.
A little excitement on the trip out, Skeeter and Winston were riding in the gator as always when a deer ran out .I guess Skeeter takes his deer patrol duties as  seriously in summer as he does in winter ,and before I could stop him he jumped over the seat back and out of the gator ! I had slowed some because I thought he was looking pretty excited but he hesitated and I thought he was staying. Nope hit the ground rolling (literally) then on his feet and in hot pursuit of the deer! Winston was lying in the back and didn't even react other than to sit up and look. I was worried but Skeet seems fine , hopped back into the gator  like it was nothing  and was running around all afternoon with no signs of trouble.
Back home to putter around weeding flower beds and cleaned out the  "dipping pool " ready to fill for the summer . Meant to work with the yearlings but the rain did come after all  for a short time and either it cooled down an awful lot ,or I got too much sun earlier because I was just plain cold! And a little worn out . Tomorrow is another day .
I will leave you for now with a few pics from around here this week 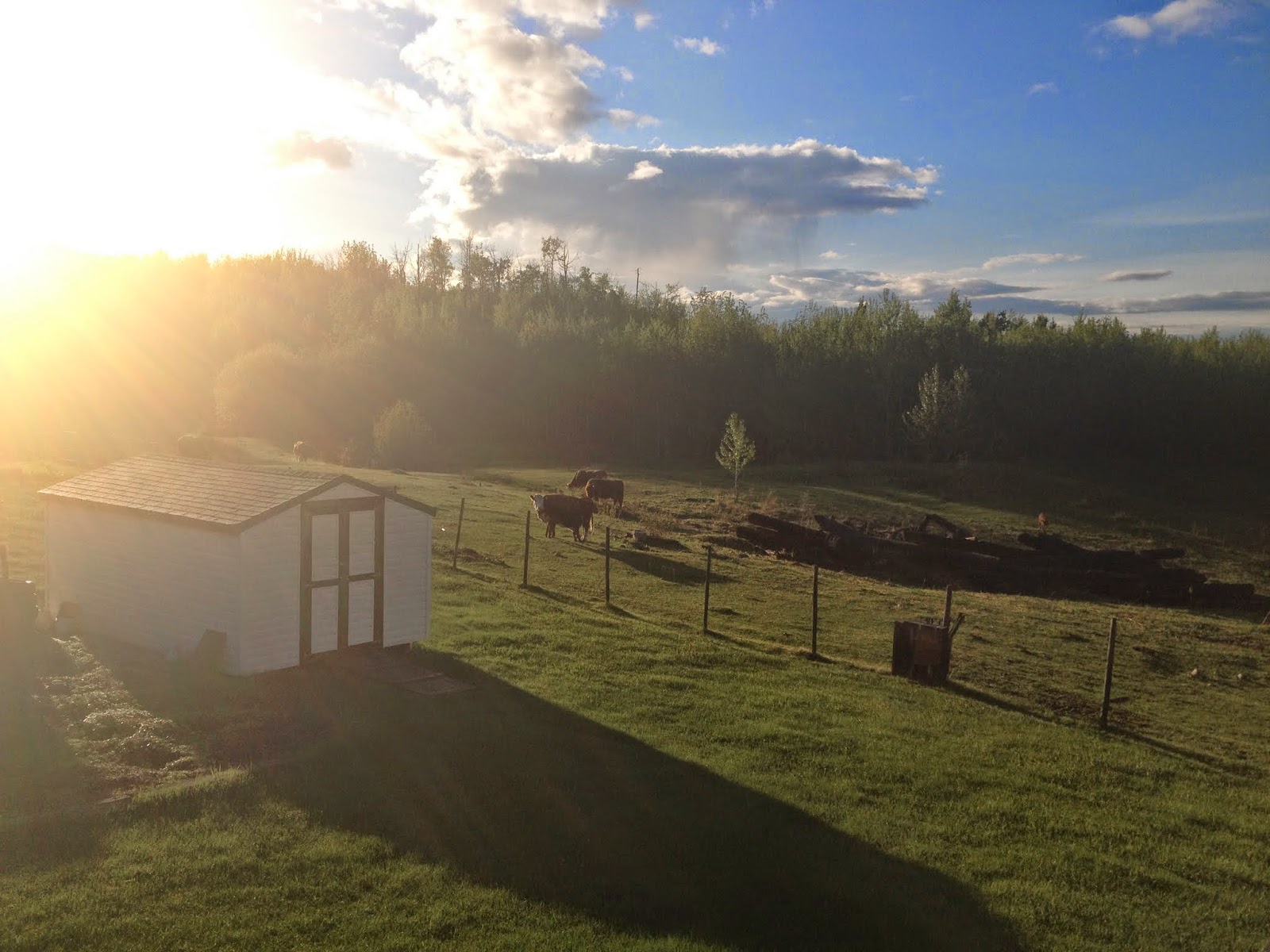 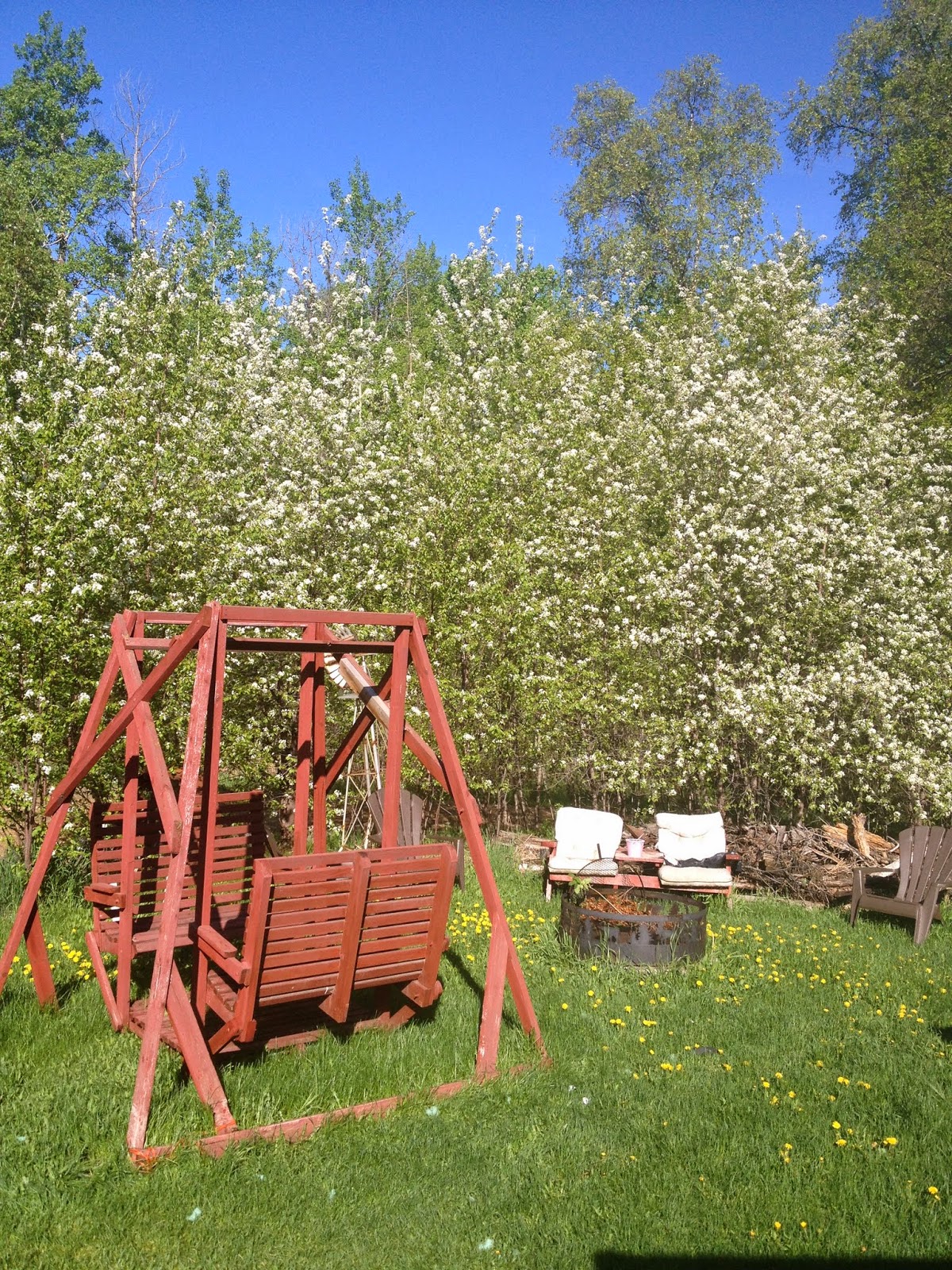 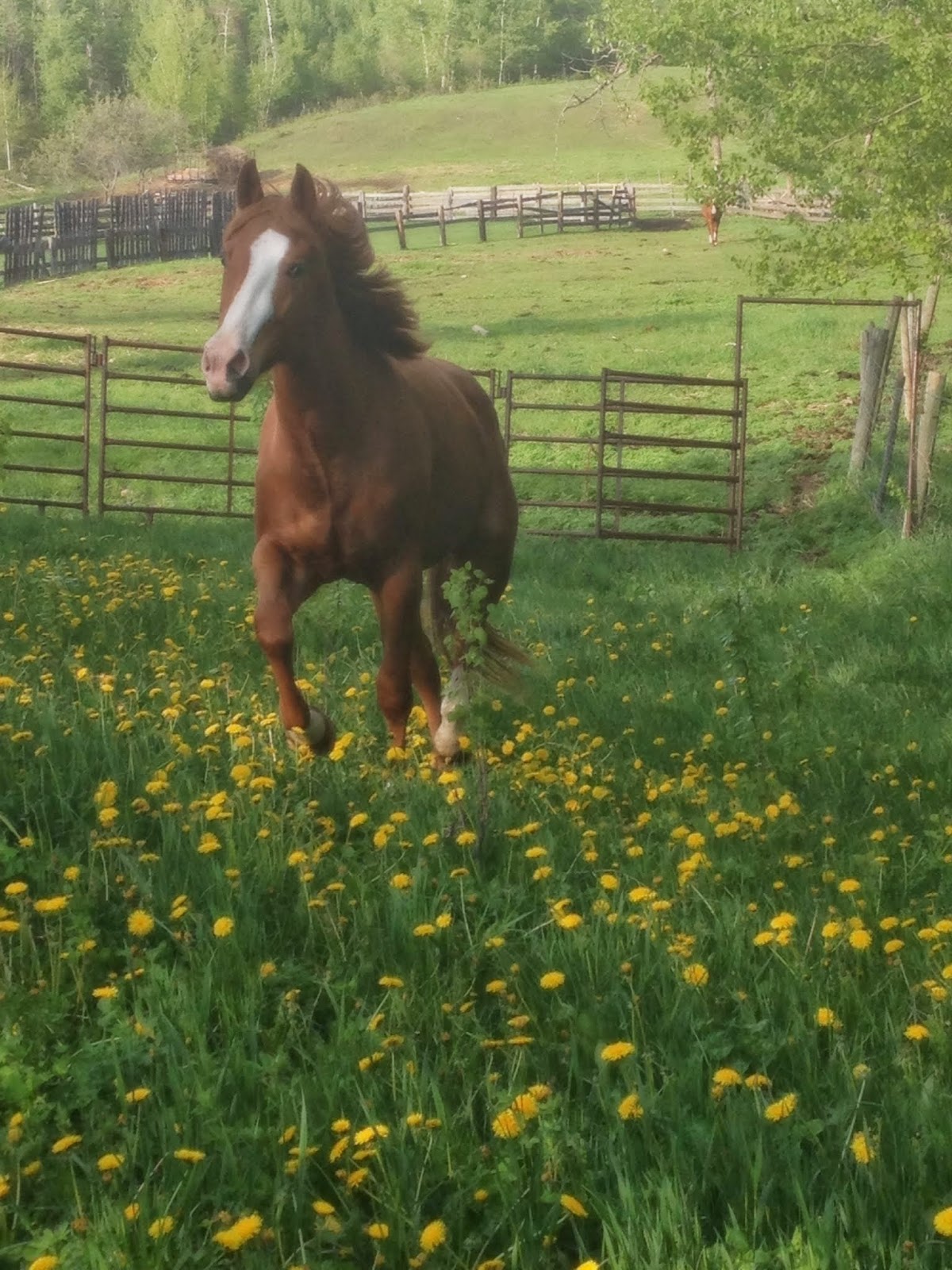 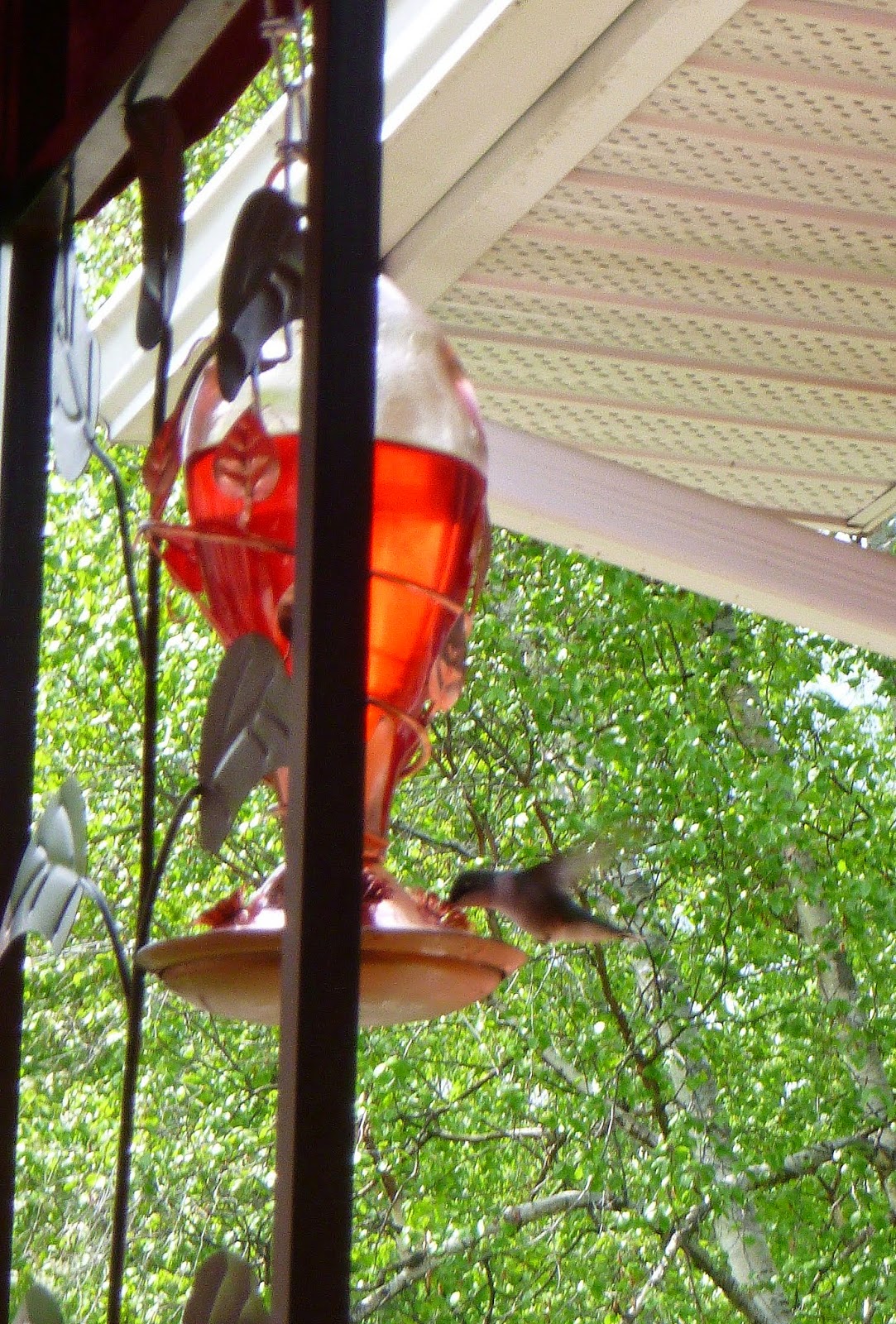 they are back! let the reign or terror begin! demanding little birds! 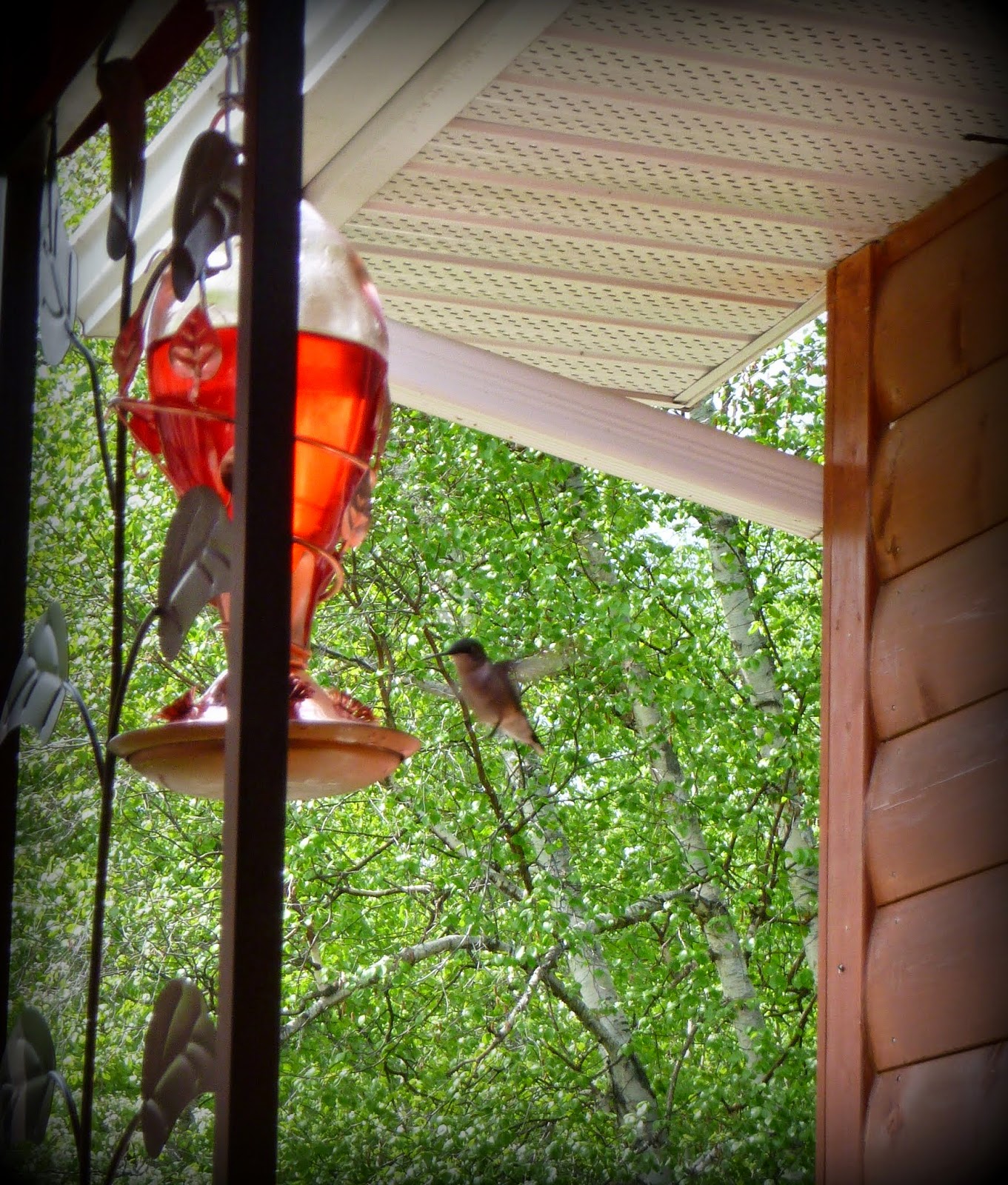 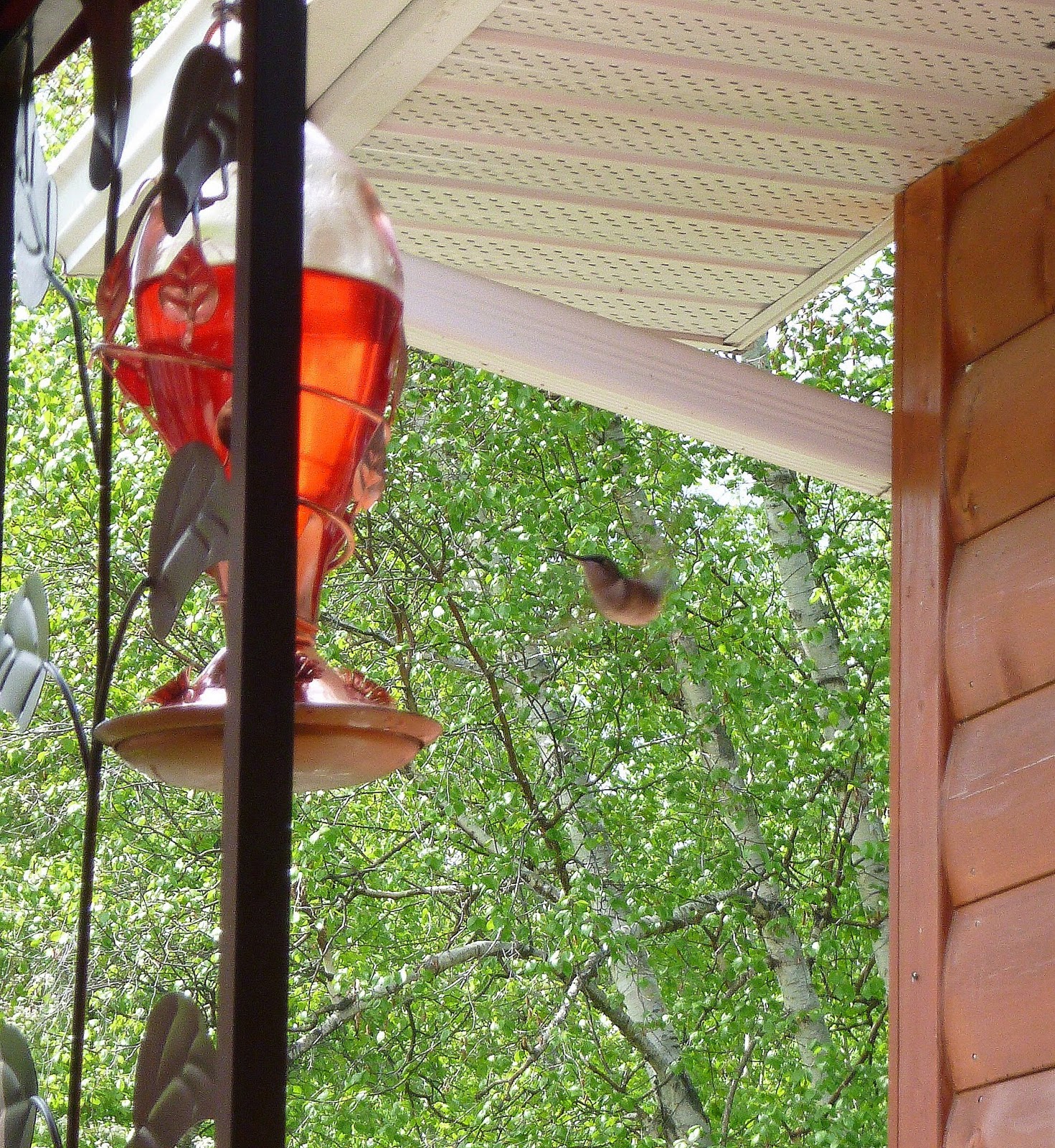 FV Casino Quest, Casey (reminds me a lot of Classy FV Canadian Classic her half sister) 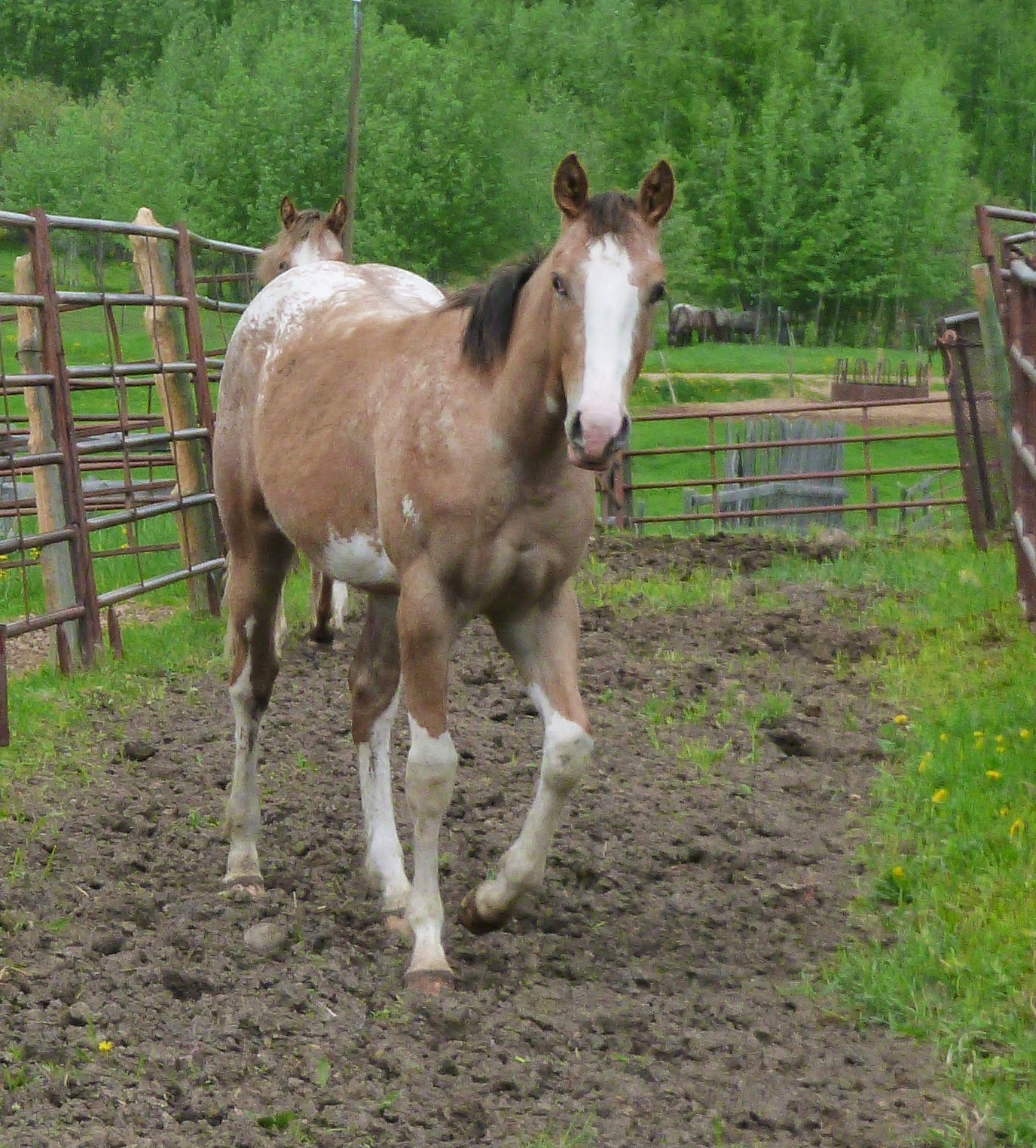 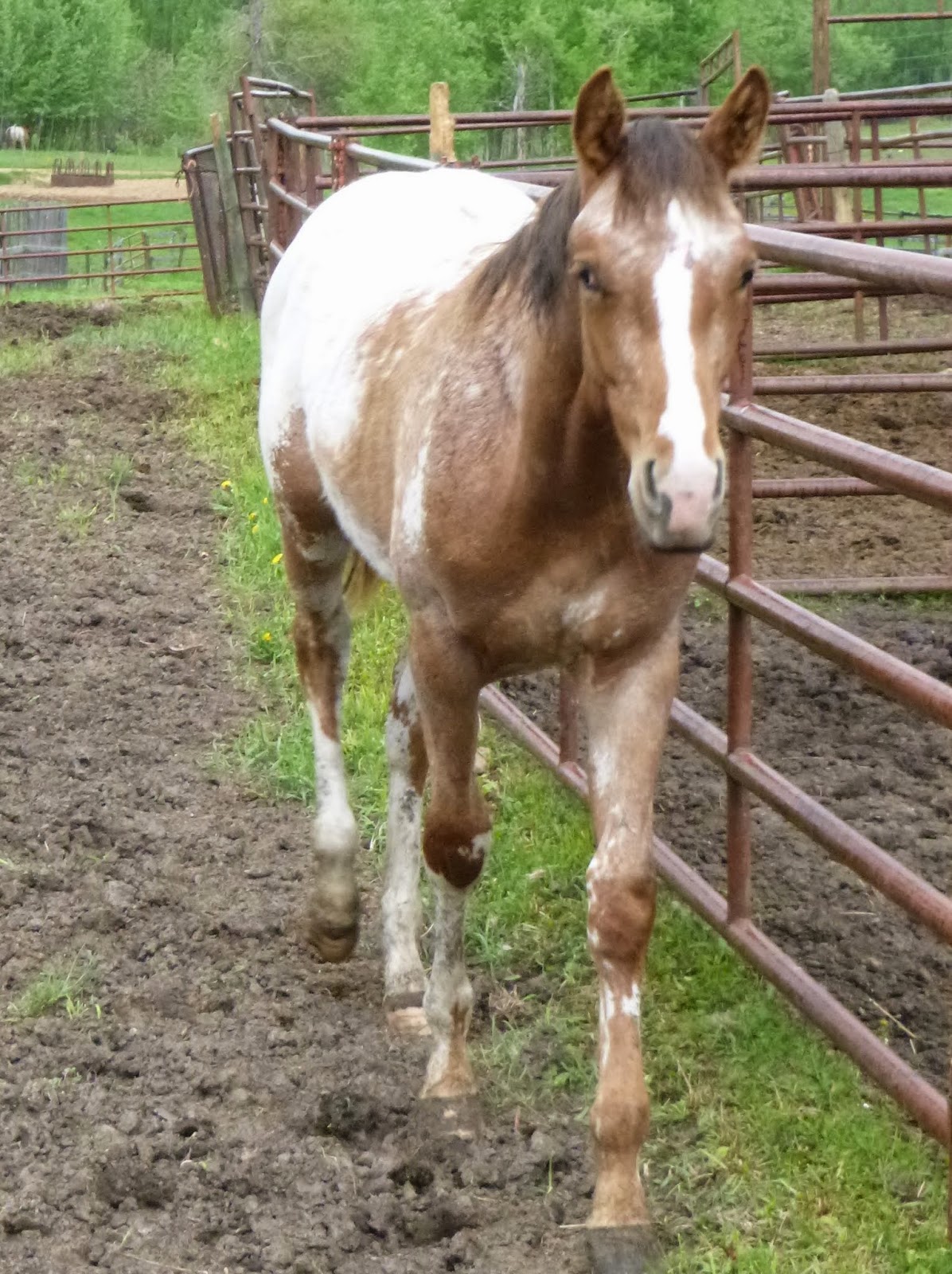 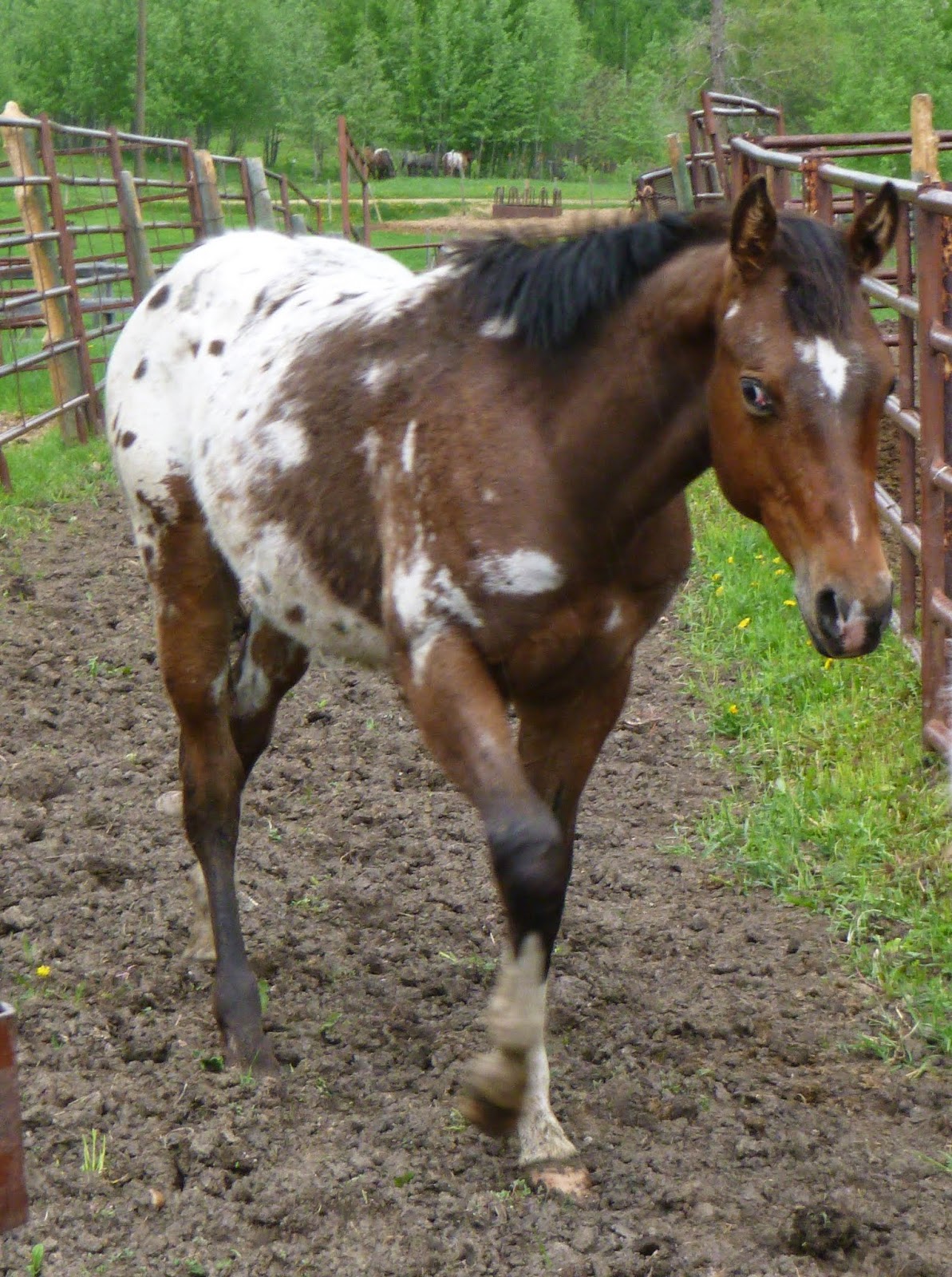 Stay safe my friends
Posted by Sherry Sikstrom at 11:43 pm

Glad to hear you got good weather .
Your mom looks great in that hat , doesn't she !
Loving the hummingbirds we get them in droves too ... I could watch them all day .
Of course I could watch you beautiful Appies all day too ~ looking good !!!

Prayers for Kirk to beat that tumour.
I've been thinking of getting a pair of Sketchers, there's a store in town here that sells them. Might have to go check them out. I think I need a pair of Muck Boots more though!
The yearlings are looking good- and Harley too!
Your mom looks great in that hat.

Great walk for a great cause! Fern Valley is such a pretty place, sigh. Your spotted babies are cuties!!

Your Mom sure does look good in that hat! Good excuse for a walk even if its not a run.
Everything looks very summerry around there, and the babies (and Harley) are looking good.