I made a deal over the summer to breed a mare for some friends, and rather than take payment in cash I arranged to exchange it for board at their facility a little south of here.The plan being to make use of the indoor arena to continue my EAPD work and also hopefully once I get back into shape get some time for myself on Cat , and Andee. Get us all fit for spring so I am able to attend some of the great rides I have been invited on and well, just ride my horses. They were initially supposed  to go around the twentieth of November but with the birthday party for my sister and the huge snowfall,then fog, and more snow... we postponed. Finally last Wednesday, the weather cleared and it was time!
I went down to hook on tot he trailer (which was nicely cleared in front of btw by my brother in law) and first  I found the lock on the hitch frozen. Sigh, tried heating the key, then tried WD 40, best thing to have next to duct tape, it is a penetrating oil, and also works to quickly dissolve ice, sometimes. While I waited to see if it worked I though I would just put the ball on the receiver, it is stored in the tack room of the trailer.Imagine my glee when I found the door was frozen shut! More WD40, and that worked a treat , got the hitch together and tried the lock again, no luck, by this time I was more than mildly irritated. I went to my brother in laws and asked if he had bolt cutters or a torch!Marc knows me well enough  he just raised his eyebrows a bit and gave me both, asked if I wanted help but he was busy with a project so I declined. One my way back I noticed that the girls were in the top pen so I whipped up and locked them up so I at least could grab them quickly if I ever got the @#%* thing hooked up!
Used the torch to defrost the lock, and apparently the WD 40 is not as flammable as I thought (about halfway through) so I did not burst into flames !
Dad showed up about then and helped line me up to hook on, I can do this myself but it sure nice to have a pro spotter. Caught up the girls loaded them and away we went ! 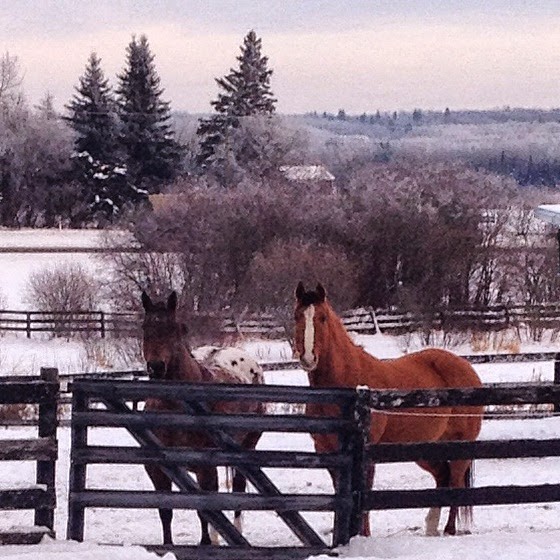 Thery hauled like the troopers they are, and settled in nicely . Will be starting sessions there with them tomorrow .

Did a final session here with Tango, final that is for this winter, if he is still here in the spring I likely will continue using him , since he is so good to work with and the kids get so much from him. 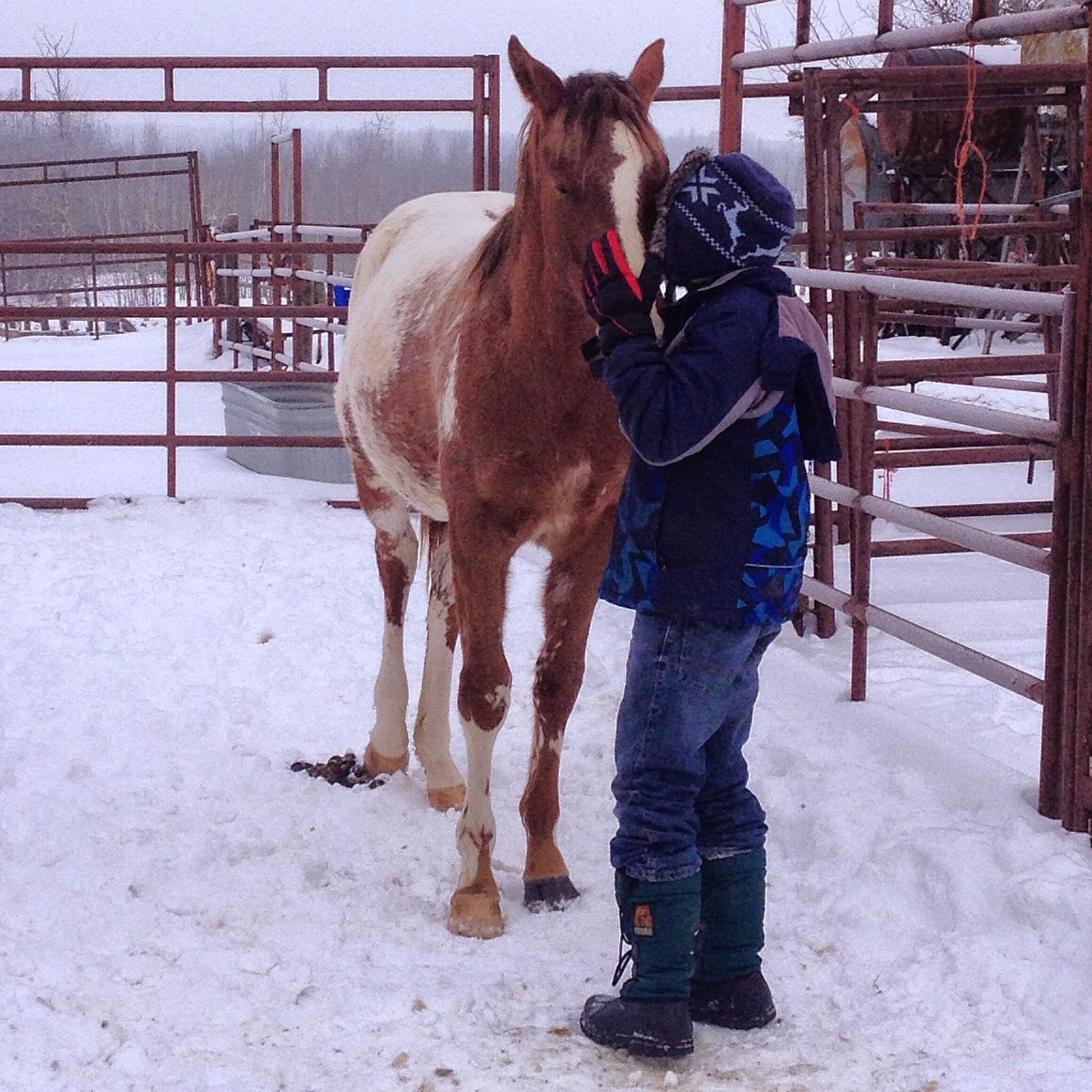 This young fellow had not been here for a while and the session went very well, but It took a lot out of all of us , in fact when my second client arrived ,Tango was flat out on his side sound asleep!
No problem, we have no shortage of "therapists" here lol .
Who should step up for the afternoon session? none other than Johnnie Handsome! 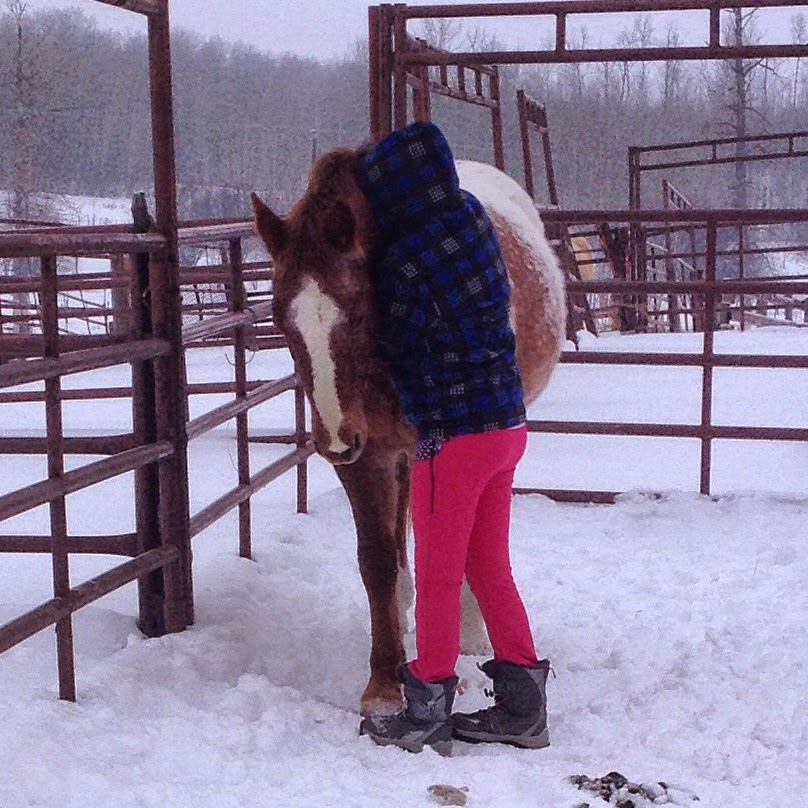 It was the first time I have used him for this , but Johnnie is a guy who rarely disappoints, and this day was no exception!
I am really loving this work, there is no better magic than kids and horses!

The rest of the farm and family is doing well, just steady day to day getting ready for Christmas, and working our way through the winter. Martin is home tonight and will be here right through till New Years! A nice long break for us.
Had a special shopping trip to town with my sister, my nieces,my mom and Dee's future mother in law as well as her maid of honor, for what? the dress of course! , all I will say here is that little lady would be beautiful in a burlap sac, but that is not what she will be wearing!
I will leave it at that for now and leave you with some pics of the last few days around here. 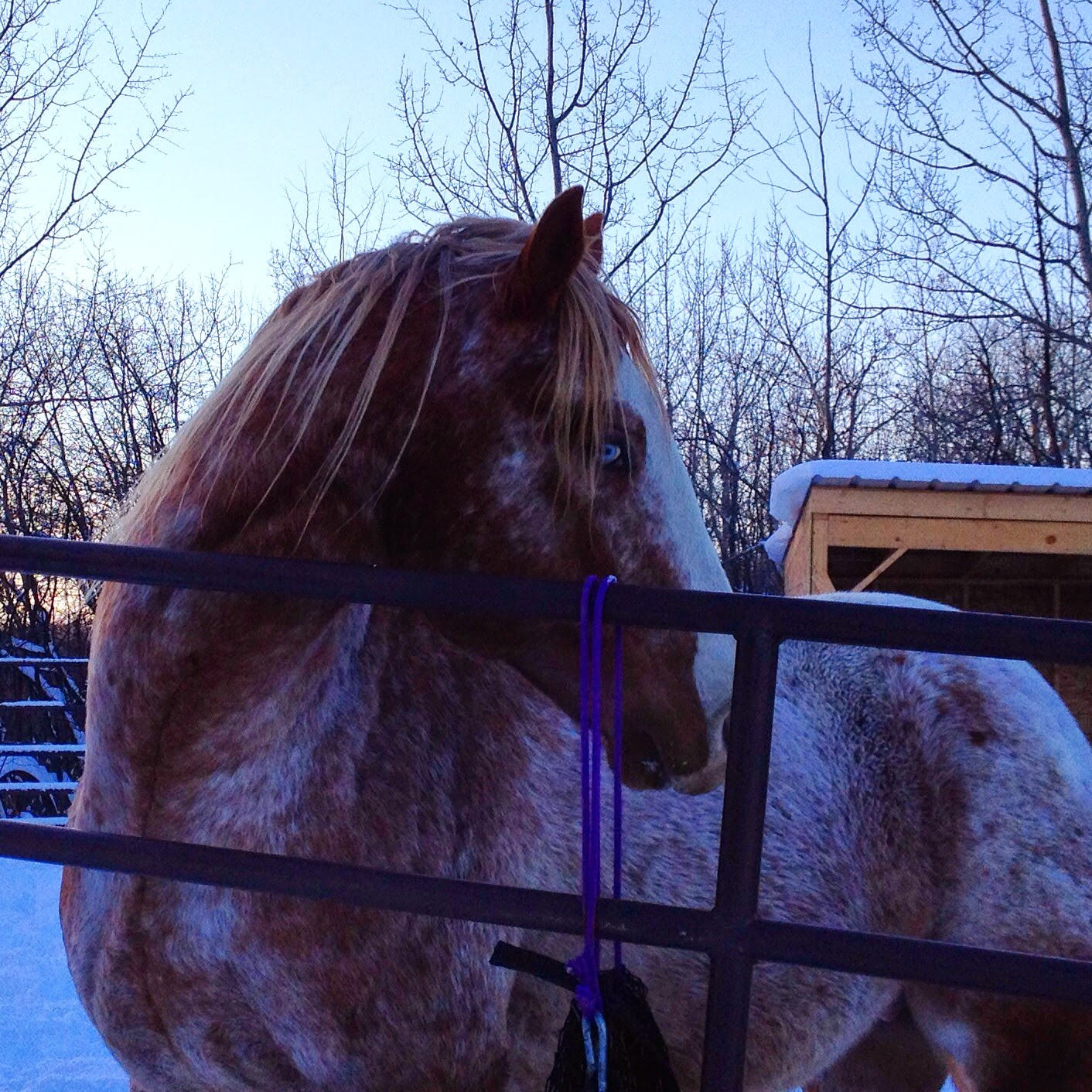 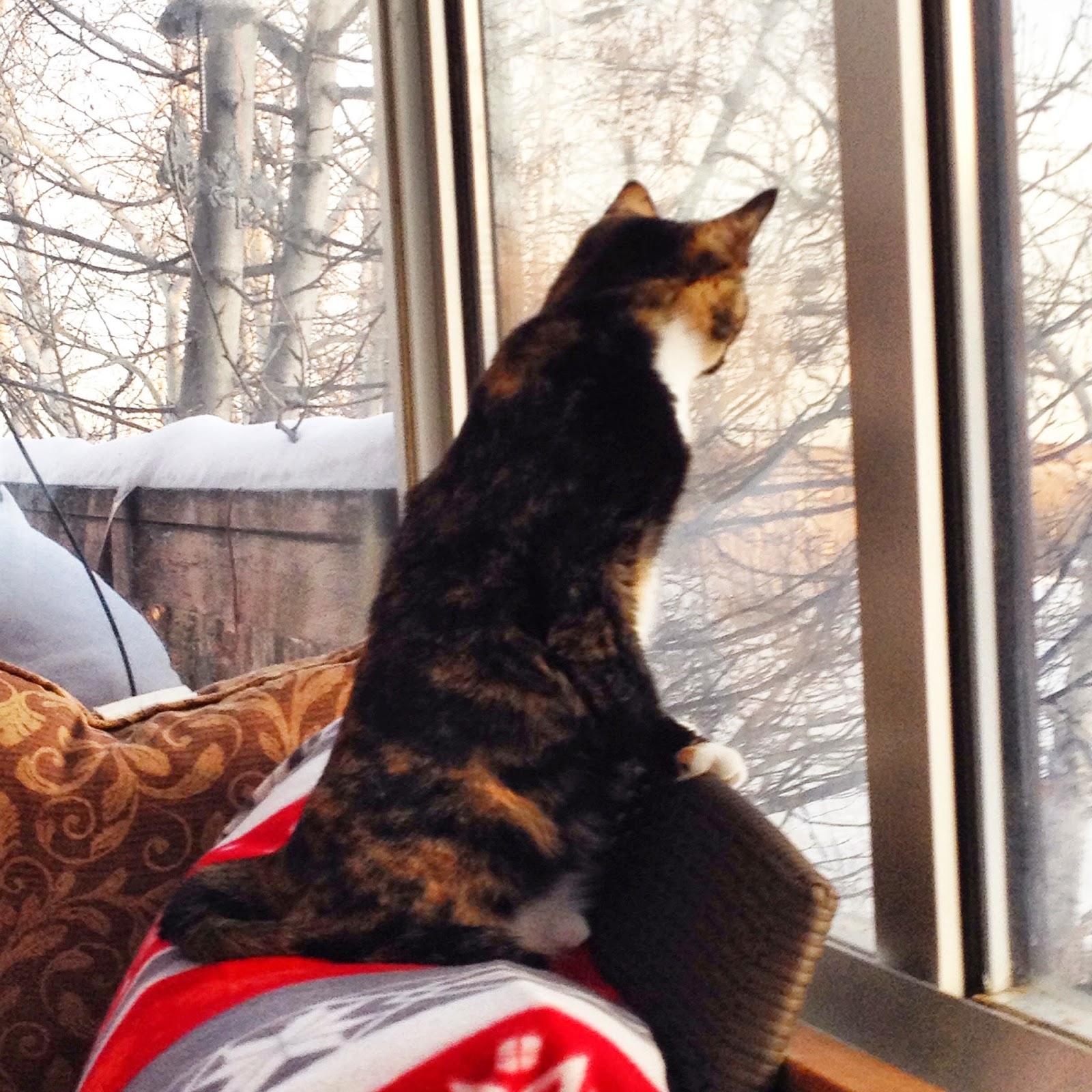 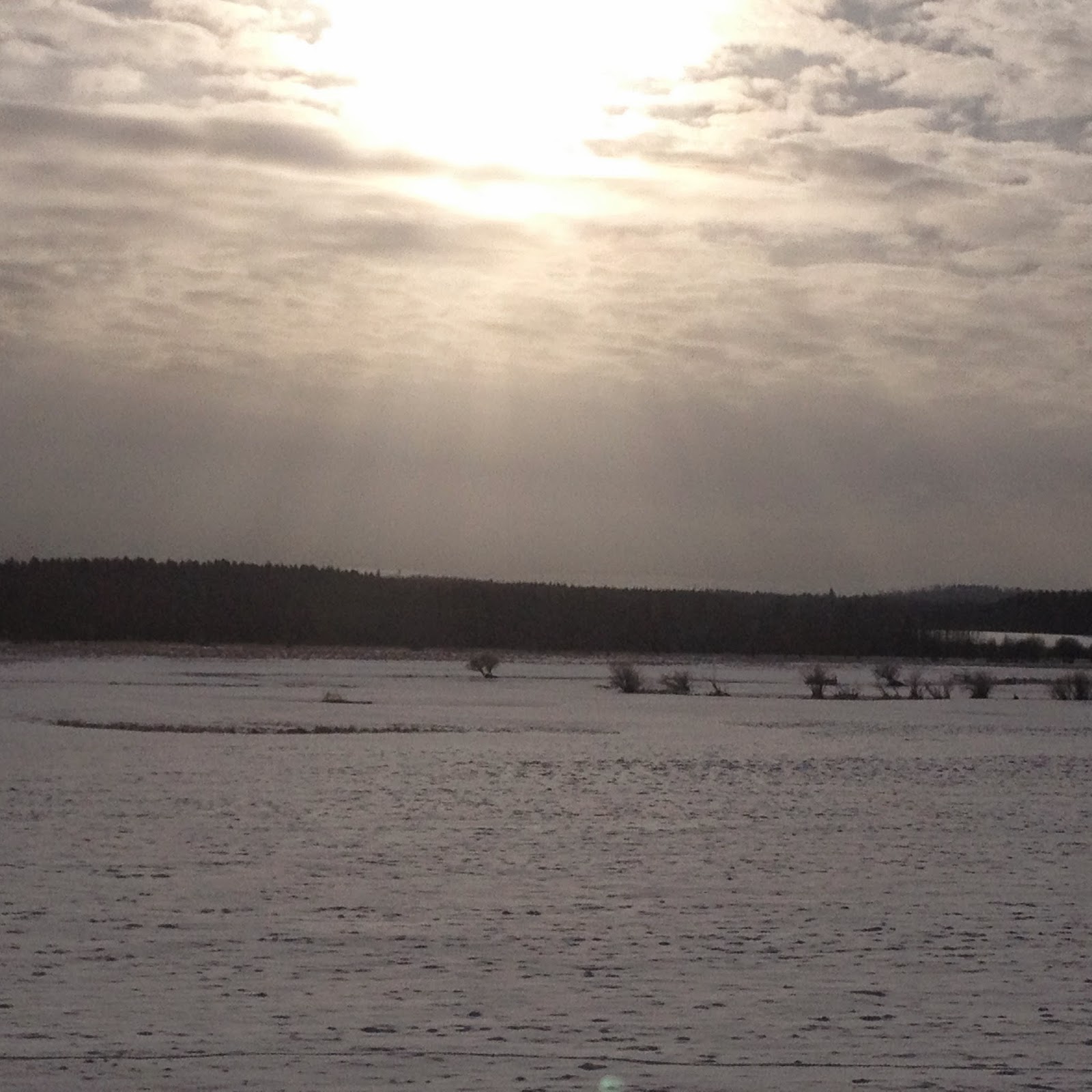 Skeeter chewing his nails, maybe worried that Santa know he chased the cats in the barn again? 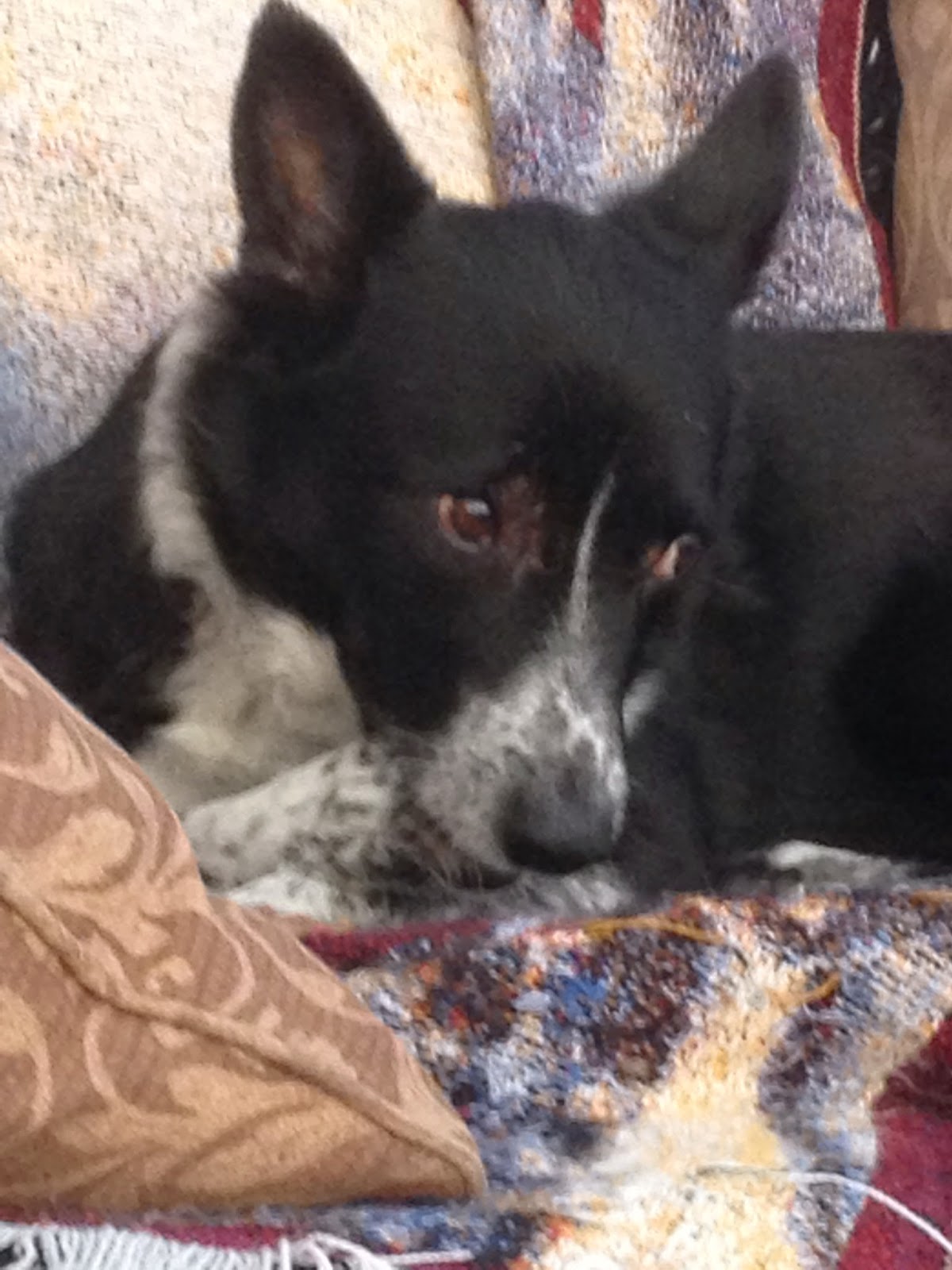 You have heard of "Cat on a hot tin roof"? well how about "Cat on a warm wood stove"? She moved fairly quickly after this photo lol 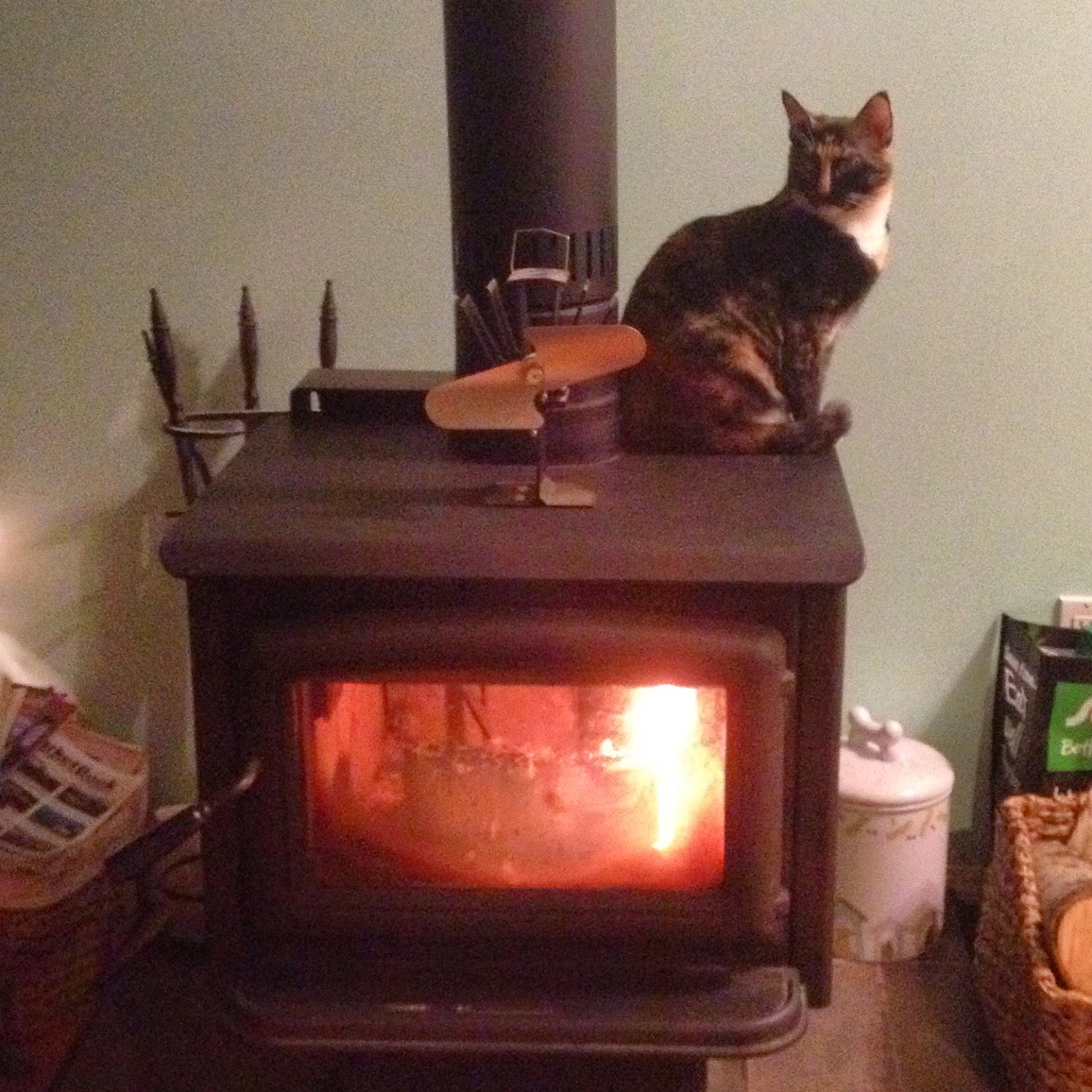 Stay warm and safe my friends
Posted by Sherry Sikstrom at 11:48 pm

Sounds like you have been busy ! Glad you got the trailer all unstuck Oh I like torches hehe ! Lovely photos ! Wow lots of snow there I heard it was very cold there to so I wont tell you we are still green here in southern Ontario and it is mils and raining , Thanks for sharing , Have a good week !

It sounds like your therapy work is very fulfilling. I still can't get that equine therapy clinic I watched out of my head. Horses really can bring out issues that otherwise might remain hidden to the human eye.

So glad Martin will be home for a while.
Tango has to stay! I hope you reconsider putting him up for sale, I think he has found his job already.
Of course, Johnny looks like he will do just as well.
Just a fyi- you now have word verification too, I don't recall you having it before.

Glad those girls will be getting some work - having an indoor to use is a big advantage. Tango seems to have some special skills for such a young one.

Sorry everyone, I have no idea why we now have a verification on here, I did not request it , nor do I particularly want it .Tried to change it in settings but no luck

That therapy is just amazing. As is Tango what a foal to allow all that truly speaks to his temperament. And of course Johnny was good!