Well I haven't been blogging again for a while, but I have been writing,m I do have more to share, and I will actually get back to that "my Next 50 yrs" post  but for now I have a little news to share.
I entered a short story writing contest with the Canadian Horse defense coalition  a while back. And just received notification and a prize saying I had won  fourth place!
Not bad  at all.
So here is the story I shared.


An Unpolished Jewel
I am opening this story, rather this honorable mention, with a poem.
I am doing so for a couple of reasons. First, it is my preferred style of writing, I find that the lyrical quality of poetry shares my feelings and thoughts more easily. And second, the topic of this particular poem speaks to the story in some way. Horses teach us in so many ways if we are open to learning. We often approach training a horse like we are the wiser, stronger, and more capable in the partnership. In my humble opinion it is that attitude that is often the catalyst for abuses of animals. When we can recognize and celebrate the mutual benefits that are availed us by animals, then we can properly learn and begin to teach.

When training a horse
Here is a secret I have learned
More often than not
The tables are turned
While we go along
Thinking we are teaching
The horse goes along with
what we are preaching
but look a bit deeper
and you see a surprise
The very best teacher
Resides in their eyes
We ask them to give, to lead on a line
They teach us of patience,
respect and of time
We get on their backs,
as really we must
They show us the ultimate form of trust
We teach about pressure, contact and release
They show us their honesty,
and willingness to please
We push them and try them
and ask them to give
they give us all that and
They teach us to live 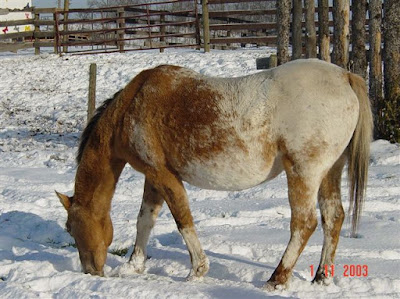 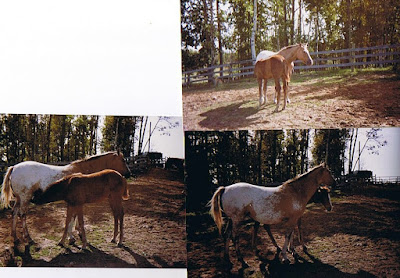 Posted by Sherry Sikstrom at 12:24 pm

Your story caused me to fall in love with your sweet Jewel.
I'm glad to see a post from you, too. :)

Congratulations on your story's success! I can see why....
She was a special one. They don't all have to be perfect, and they all have something to teach us and find a way to touch our hearts when they do.

When there is something we need to learn, the right horse comes along for the job of teaching us. We may never know the priors before they show up, but we will certainly know the results!

A well written piece girlfriend. I can see why and how it got you noticed. Congratulations!

Congrats on the contest! This is great, your writing & wisdom draws me right in! You've mention Jewel in the past, it's good to know her story - a well-deserved honorable mention.

Oh Sherry, precious Jewel...my heart goes out to her for the injustices she suffered at the hands of some unscrupulous rat bastard. I agree - best not to know the "who" of the situation because, well you know. I am so thankful that you gave her a home, where she knew kindness, patience and understanding. God picked you for her, and He always has the best of reasons. I understand questioning of my abilities at times, but you were just the right one for the task at hand. Thank you for loving her and providing her that safe haven in life. She probably loved you more than you've ever realized. I believe so...

Congratulations on the win - awesome poem! I love it.

your blog is very nice thanks for sharing us...

Have not heard from you in a while. Just wanted to let you know you are missed. Hope all is well with you & yours, and you are having a fantastic summer!