This honorable mention was posted in Feb of 2010. and luckily I had saved it with Blog2Print because this is one of several posts I was unable to recover through Googles archives . SO here it is again
I bought Jewel as a 5 yr. old. A friend had called me about a registered Appy mare that she (or someone ) had "rescued" The mare had come from what was described as a "bad situation”. Not a lot of detail given ,other than her age , her papers,the fact that she had had 3foals (that means bred as a long yearling!) and was very spooky and thin .
Helluva deal right?
Well whatever I went and got her anyway. 2 hrs. loading her in the trailer and brought her home . I kept this thin crazy little darlin in a box stall for a few weeks trying to get her settled .Daily handling,which involved me standing in the door of the stall while she ran in circles and backed into the corner working herself into a total frenzy dripping with sweat and spraying loose manure in all directions ,until she let me put my hand on her , then slowly I got a rope ,then halter on her and took her out for a walk and some green grass. I would get her dried off ,brush her a little then do it all again the next day.
Did I mention I was alone doing all this with this bat sh*t crazy horse?
Anyhow, this continued until she seemed settled enough to turn out , she had stopped panicking when I went into the stall ,and was accepting affection to some degree.
This mare had clearly had a rough go of it somewhere in her life ,but I was hesitant to call abuse ,without other input .My farrier at the time was an incredible horseman , and he agreed that this was not just a crazy horse ,and that among other things she had had a nerve line/war bridle used on her (she would barely tolerate a halter ,and it took years for me to be able to touch her ears)
I never got her whole story ,maybe that's lucky as I believe if I ever found the sonova buck that did the damage to that mare ... well lets just say things might have gotten a little western
I kept Jewel till she was 25 ,and after she suffered a stroke sadly had to let her go. In all that time she settled some and was accepting of my handling her , but I never really was able to heal the scars in her mind.
She raised several beautiful foals here,most of which were sold ,however I saved her last foal FV Jazz ,to carry on the line here .I think I picked a winner ,looking at Jazzy's foals ,FV Jazz Time and FV Sparks Image, As well FV Dandy Line 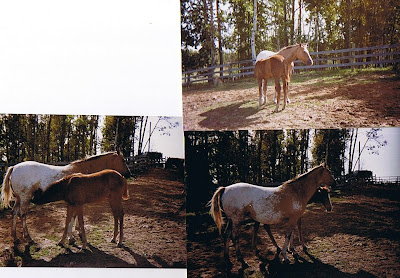 And honorable mention ,for an honorable mare
Posted by Sherry Sikstrom at 10:06 pm

"Get a little western" boy I've had that feeling before! :)
Glad she had some good years with you. Some people just disgust me, but again I'm very glad she had you in the end!

I'm imagining the endless amount of patience it would take to calm a critter like that.

My admiration for you, already big, just grew a little more.

Poor little thing. So glad she had you to take care of her.

You were the best thing that could have happened to that mare- bless you for your time and patience with her. She certainly paid you back well with her progeny.

I am so glad she got to live most of her life with you. You may not have totally erased the memories of bad handling, but you gave her a peaceful life and I'm sure in her own way- she loved you for it!

It is a sin how some people treat animals and the worst of it is they get away with it. I am glad she lived out her years with you on your ranch and had the best years of her life there ! Have a wonderful day !

What everyone else said, how lucky she was to have found you!

It's nice knowing she had the best years of her life with you before she met her end. As much as we may want to "get a bit western" on people like that, had they not been there & done whatever the hell they did- we would not have gotten the horses we have, coming from those situations. So yes, asshats have their place in this world, I just wish they would hurry up and get a swift kick by Kharma, right where they deserve it!

I'm a firm believer that every single person will someday pay their debt for their deeds done...accordingly so, good and bad. We all will. Bless you Sherry for taking her in and giving her a loving home and some peace. She got to be a momma and live her life.