And the hits just keep on coming!

This has been a difficult post to write , in that I have had a lot going on ,not much of it good.I don't love to complain , but in the interests of keeping it "real" .. .

I have mentioned the loss of my Uncle .And my mom has had some continued difficulties in hosp . She will not be coming home for a while. We had a meeting today , and the plan is for her to continue therapy in a transitional setting, then hopefully will be well enough to come home in 6 weeks or so .It is hard on her and very upsetting to all. But safety for her and dad in the home has to be the priority and right now she is still too weak.

Took Martin to the airport last night , and on the way home had the frightening experience of playing "dodge ball " with the wheel of a tractor trailer unit that had come off the truck! Not fun, and a nod to my fellow motorists on the road,Nice moves guys ! we all got out unscathed. 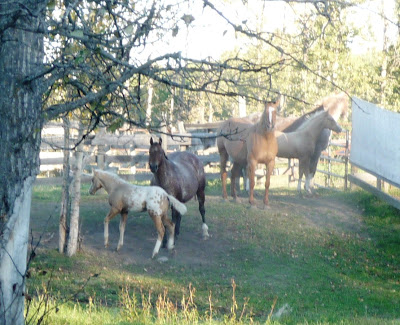 Got home to do chores , and whether it was the fact that I moved Dandy and Wilder, the neighbors peacocks running around in my yard again or just good old fashioned Sh*'thouse luck. The mares got all jacked up and started running around like lunatics in the field. Got them settled ,but not before , my sweet Comet ,hit a down tree, and gouged his chest!
I should mention here, that Quinn , took a corner too fast about a month ago  and took a board off the fence with his chest , developing a large abscess on his  chest . He has just nicely healed from that (and what an absolute darling to treat! ) and no Comet has a gouge in nearly the same spot! (different pen , different cause , but all the same , another injury to treat )﻿ 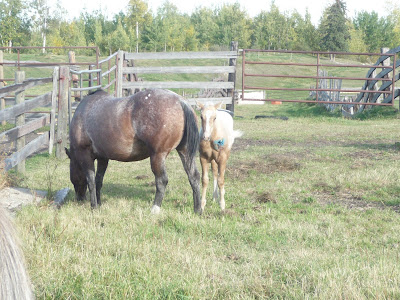 It is messy  and a bit swollen from the impact , but all in all I believe we can clean it up and get him healed. As bad as it looks ,he is bearing weight and moving well ,only showing a slight limitation to forward extension at the walk.﻿ 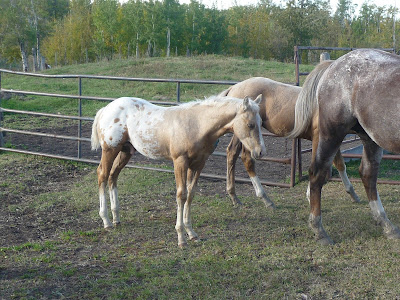 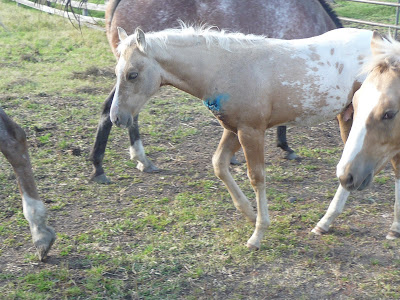 This end as you see is still in fine form.﻿ 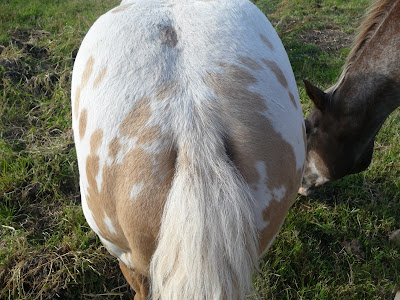 Walked out tonight to check the young girls , and found Cat(Catch a Dream) to be quite lame as well! no lacerations,heat  or swelling , and did seem to "walk it off " some so I will keep an eye on her ,and maybe give her some bute as needed . Not entirely sure it isn't an abscess so we will see.
I have to admit when I saw her I had a moment of laughter, not that I find it funny , more like a little hysteria. I have had quite enough for a while thanks! ﻿ 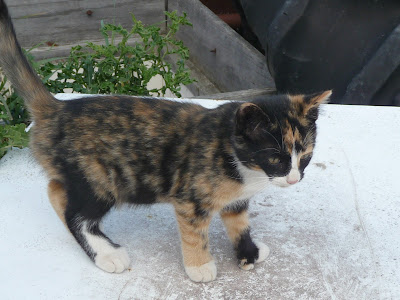 The cats seem well so far so hopefully all will settle into a sense of normacly soon . Yeesh!
Injured stock is part of the package as we all know , and as several fellow bloggers can attest , it never rains but it pours !. As the Maggie  Muggins books I read as a child always ended "Well Mr Mc Garrity , I wonder what will happen tomorrow"
Yup I wonder too!
Stay safe and well ﻿
Posted by Sherry Sikstrom at 10:26 pm

Sorry to hear it's going to take your mom some time to get her strength back, but hopefully the transitional therapy will do the trick and get her home asap.

Sorry for the loss of your Uncle.

As for the livestock...Yup...When it rains it pours.

I've never had a horse get a hematoma on their chest, but when Beretta got her's (I'm guessing from smashing into the fence as well), it was grotesquely huge for a couple of weeks and took over a month to go down. Two months later, I can still feel a hard spot in there. It's not all the way back to normal looking, but if you don't know any different, you just think she is 'flat chested'. LOL Not a good look for us girls. ;-)

Oh...and I didn't know you could give a cat bute. New one on me. But Kat is a cutie!

BEC, sorry I should CLarify the kitty is Callie . Cat ,is Catch a Dream ,my bay /blanket filly ,better known as "the Fat Baby"

So sorry to hear about your mom.
I totally understand the "when it rains, it pours". I have had a miserable year with animal injuries etc. In the 20 years that I have owned horses/dogs/cats, this has been the worst year by far for anything and everything.
We should be due for a good couple years now, right?
Hope baby Comet is doing better soon!

I really hope the ugly side of life calms down for you soon. That wound looks NASTY !

Sit down have a glass of wine and a deep breath.

Sorry for the loss of your Uncle and I hope your mom recuperates quickly with no more set backs.

I am so sorry for the loss of your uncle, and for your mom's difficulties. Hope the horses settle down soon with no more injuries.

Dodging that truck wheel just sends shivers down my spine - stay safe out there!

What everyone else said, (minus the giving a cat bute part:)
Glad you still have that marvelous sense of humour, I LOL'ed at the "this end is fine" pic. Hope all settles down, that's enough excitement for one week, thank you very much, critters!

Hug Johnnie for me!

Our condolences on the loss of your uncle.
I know your mom must hate being in the hospital, but I hope it does the trick and helps her get well enough to come home. I'll continue to pray for her.
Just looking at Andee in that first photo- what a tank! She'd make an awesome ranch horse.
Poor little Comet! Hope he heals up good, and that Cat's mystery lameness clears up.
Now, go hug a kitty!

What a rotten day! my condolences on losing your uncle and best wishes to your mom. Sounds like a tough one. You better come for coffee this morning;)

My condolences on the loss of your uncle. Hope your mom improves quickly. Poor you! So many injuries!! Hopefully your bad spell will end and things will improve. The boys look like little Breyer models- they are so cute!

It's always difficult when our parents start to have health issues. I hope that your mother's recovery is swift. They say it comes in threes, so I think you are done for a while. Condolences of the loss of your uncle.

You just gotta believe, "The Sun Will Come Out Tomorrow....Come What May".

Yikes sounds like an awful day! Poor Comet, but Im sure he will heal up too. I use the same blue spray, sure makes the would obvious on a light colored horse!

not would, duh! wound!

Oh Sherry, I'm so sorry for all this crap that's been going on for you. I will keep you, your mom and all your beautiful ponies in my prayers. Sorry... it's sad about your mom, can't imagine how she must be feeling. But, let's hope & pray that she gets better real soon! I guess we just have to be thankful that our horses's injuries will heal in time, and with a little "elbow grease" from us caretakers. It could always be worse, right? Another, be thankful deal is that truck tire!! Holy shit, that kind of stuff scares the bejeebers out of me!! So happy to hear that nobody was hurt...don't ask, "what next"? Just take a deep breath, say a prayer and move on. And, like somebody else said - a glass of wine couldn't hurt. :) Love to you my friend!

FV, just keep thinking what we have been this year too--- all the bad stuff, all the ugly stuff, all the traumatic and painful stuff happens so that we may feel the joys of the good and enjoy it even more.

Prayers continue from this end for your Momma and Dad.

Hang in there, we are all pulling for you. Hopefully you reported that trailer wheel as that is a major violation for commercial vehicles. Someone is not doing there job when things like that happen!

Dang! It sure is pouring there. I swear life is like a roller coaster ride, you have your ups, y ou have your downs, and the fun twists and turns... hopefully you are on the upward move!

AH, I know that feeling! I hope things are heading on the upside for you. Sorry to hear about Comet, I hate it when accidents like that happen (but they always do with horses, no matter how you try to protect them!)
We had a mare at the ranch turn up lame yesterday. She's been buddying up with a new horse that the herd has been harrassing so we wonder if she got caught in the crossfire. She shows no signs of injury but had a hard time moving her front leg from the shoulder (almost dragging it, but could bear weight on it.) Hope it's nothing serious. Hang in there, and sending prayers for your mom!!

Holy Horse Injuries! I am so sorry to read of all your troubles. I will keep your whole family (including your animal family) in my prayers.

Hope your mom continues to improve. Hope Comet does too, he's one of my favorites.

Good lord girl, you sure have had your share of upsets this past while, keep your chin up!! this too will pass!!
My two year olds have all decided that they too should carve up their legs, apparently I do not have enough to do!!
Prayers for your mom, and dad, and condolences for your uncle.
you sure have some beautiful animals, and they are GREAT therapy for all our human ailments!!

Well if it rains it certainly pours and if things come in threes- You should now be set for life. At least in the respect of all of this crap continuing.

I agree on the wine, but why stop at one glass. Drink as needed, your mileage may vary, lather rinse repeat...

Sorry to hear about your mom and the lengthy recovery. A few years ago my mom had her appendix burst and the one week she was in the hospital deemed her too weak to go home. Since she lives alone, she had to spend a month in a care center for rehab. She hated it, made sure we knew it, but it was for the best. She worked hard to be able to return home and she made it. Celebrate the small steps she will make and hoping she returns home soon.