Slippin and a slidin!

We have had unseasonably warm temps lately , and added to that we had rain  a couple times in the last week. So the footing around here is best described as treacherous!
Not as bad in the fields as we still have some snow pack , but the barnyard , and the driveway are exciting to say the least ! the highways have been fairly good , though the trip to the airport Tuesday night  with Martin was a bit of a white knuckler! I took the back way (BIG MISTAKE ) and saw the error in my ways in a big hurry as we passed 3 cars in the ditch in less than a mile . Was going about 10kmph heading up to the stop sign and gently tried my brakes. The anti slip system kicked in immediately and I felt the back end of the truck  wanting to come around  to meet me! !!!!! By the time I dropped him off and headed home the rain had stopped and the sanding trucks were out in force. Add to that I took the main highway home it was a much nicer trip.

But the last few mornings, and evenings  doing chores  has been interesting to say the least ! 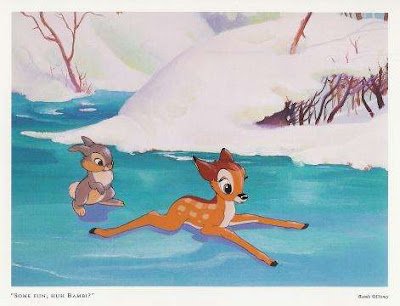 I haven't actually wiped out , but it has been a close run thing! We have had a few years out here where it has been this bad or worse, when even the pastures became treacherous . One year in particular I was carrying pails of sand out to spread in all of the gate ways , and icy spots , when our big Angus bull though her would push past me to go out . Well that poor bugger got more than he bargained for ! He sped up , hit ice ,and was actually airborne before he went down!!! I thought the sound I heard was his neck breaking, but apparently not , he shakily got to his feet and gingerly carried on. I don't recall him ever pushing his way through a gate again hmmm curious...

Anyhow , seeing as I already have enough owies in my life I decided today on my break to go get some traction 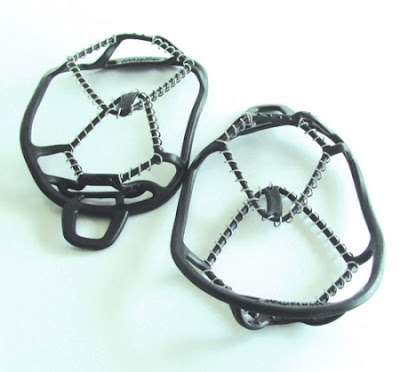 They don't look like much but if you put them on the right way (yes I did it backwards first, the little tabby thing is to be at your heel ) they stay on well enough and really do help . Areas that I was "surfing" on  this morning were no trouble at all !
the only issue I found is if they pop  off , as one did later (once I had them on right) I was striding along with all  kinds of confidence when suddenly my foot slipped , I looked down and sure enough  the trax had popped off . I may try to  tie them on somehow .
Apparently I was not the only one who was looking today , I met one lady at 3 stores , and she and I found the last few available in the Greater Spruce Grove area  finally . We were getting to the point where one of us felt like a stalker ! There are a couple other types out there , a new one actually designed by a Canadian , but it was promoted on the news the other day so I doubt with all the ice around we will be seeing many available. I am pleased with these  so far, I was getting so desperate I had  formed a plan to either tie some barbed wire around  my boots or call Ernie , and see if he had sharp shod any ponies lately and had  some spares or worn out borium shoes that I could tie on! Now wouldn't that have confused people tracking me?
Anyhow after last winter I cannot believe I am saying this , but we need some snow pack around her! 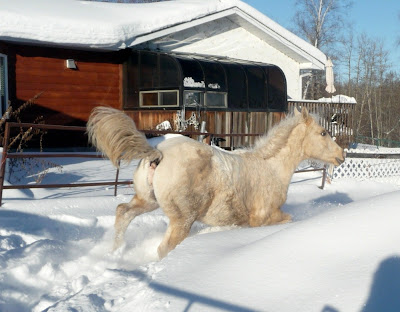 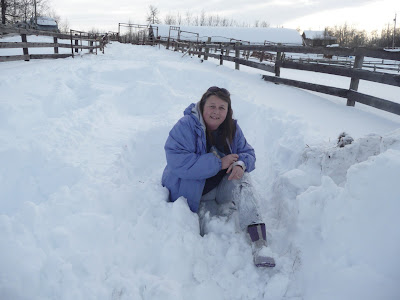 At least with that  you don't mind so much if you fall!
However you do it stay safe and stay warm !
Posted by Sherry Sikstrom at 7:31 pm

Yep, it's been a real fun time over this way, too! I ended up on my back just walking on the road to see what all the flashing lights were at the neighbours. Think snow. It's more manageable! :-}

I'm glad someone invented something to help people stay upright on ice. We still don't have any snow, so we've been watering the lawns and trees. My husband let the water run down the sidewalk, and when I innocently went outside the other morning I slipped on ice from that, because I didn't expect it to be there. Funny that you and another lady were searching for the same thing in the same stores.

I had to go buy a bag of ice-melt today just so I could make it from the house to the horse shelters to feed. We only had about an inch of snow but it is all ice now in the shaded areas and all gone in the sunny areas. Hopefully it will be all gone by tomorrow, more rain in the forecast. I'm calling this the winter that wasn't.

We've recently experienced icescapades as well, not fun. I always worry about the horses getting hurt, but they seem to slow down and manage.

I've brought trackers for my mom to use when she walks the dog, she really likes them and says they help. Funny I just mentioned getting a pair for horse chores too. I wondered about them popping off. I think some brands have straps? Whatever helps, ice is so treacherous!

This has been a CRAZY winter! Sounds like y'all are getting the weather we normally have. Stay safe!

I got some of those exact traction devices for my hubby before Christmas. He uses public transportation and ends up walking quite a bit, which can be dicey when it's slick out. I don't want him falling and getting hurt and those things will help keep him safe. Glad you got some for yourself. Don't want to see you get hurt either. Us more mature girls do not heal as quickly as we once did! You look adorable sitting on your bum in the snow!!! Very pretty!!

Very, very strange year. I know the feeling, black ice is my biggest fear. Drive at night, with freezing precip, low-use road? Nope, cannot do it anymore.
I will wait, in the morning, for other cars to warm up the country road for me;)
We have the heat shield of Toronot blowing hot air our way too, which helps;)
I like skating, but for sure, only voluntarily. Sure don't trust the ponds right now!

Nice boots! Because I have a pair just like them... lol Only mine have never seen ice and I would like to keep it that way, thanks.

Hey Lady! Your pictures are still soooo awesome! Love seeing your critters and your life! NOT the snow to!!! (we are getting(and have gotten) our first real snow of the winter YUK!