Water water ,its right there , across the skating rink!


Excerpted from the Rhyme of the ancient Mariner
The ice was all between.

The ice was here, the ice was there,
The ice was all around:
It cracked and growled, and roared and howled,
Like noises in a swound!

Water, water, every where,
Nor any drop to drink.

No I didn't shoot an Albatross , but the ice around here is  getting to be more and more treacherous. and while we all preach  animal care means  access to quality feed and fresh water , how much emphasis is put on the "access " part ?
I have been keeping a pretty close eye on things , around the waters for the cattle and horses, and most are staying relatively OK, but this farm is mostly on a slope , and while it makes for good drainage it does not work really well when we have so much ice .
The mares water tank is on a slight slope , and  while they were still able to get to and from it along the side of the fence it was becoming  very slippery around it , and it limited how many could be there at one time .
I don't honestly know if there is science behind this one or if it just something I was told on the farm as a child , but I was taught there is a large risk to pregnant mares losing a foal  due to a slip on the ice . Whether it is true or not , it certainly is a risk to safety and soundness .

SO I was fussing and mulling over what to do, sand works to a degree , but once it melts or rains again sometims the sand is covered , salt is not an option as the de icing salt is not  safe for them to lick , and regular salt they would lick up before it was effective ,also if it rains or melts and freezes I could be out there daily .
So after some thought I took out a bag of shavings.
I wet down the area with some fresh water (no point in just covering the ice ) so the shavings would stick  and layered  damp and dry shavings over the whole area. This is not a perfect fix either , if it rains or  snows a bunch they will be washed away or  covered. but for $5 a bag I can afford to do it again if it rains and if it snows, we will be fine as the snow will pack and add traction . 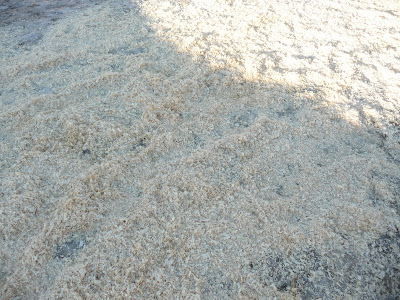 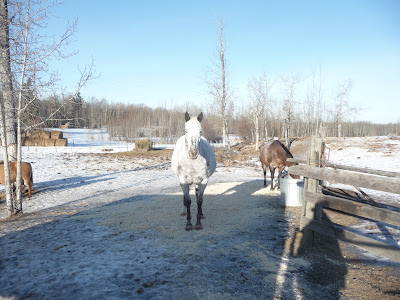 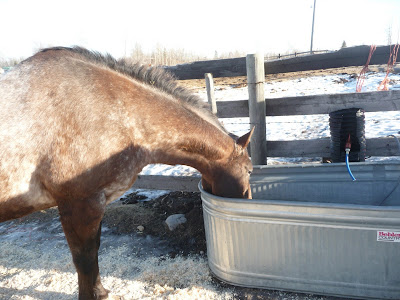 Most of the mares seemed to "get that I was helping , and Rich ,Jazzy and Jewels paraded right up for a drink ! Ici and Peps , however seems convinced it was quicksand , or some horse eating variety of  footing designed specifically to  burn off their little hoofies!
So I went with some  bales string , caught  each of them and led them  up to the water, they came, not willingly , but did follow eventually , then once there  were fully prepared to dance around like fools!! sigh , rocket scientists , the pair of them ! Oh well the things we will do to keep our precious ponies safe ! As I said the rest seem OK, but I will be keeping an eye on things , and at least I have figured out a temporary fix!
Stay warm and safe
Posted by Sherry Sikstrom at 11:31 am

We had some snow here in Ontario but it got so mild it melted . Our rivers, ponds and lakes are all flowing nicely with no ice or over flow for now ! Today the temp has droped to -1 but the week looks warm again and sunny ! Mother nature sure is playing games with the weather theis year! I am glad you got all that sorted out and hope the water level stays in a safe zone for ya ! Love your photos .Have a wonderful day !

Yep, much the same over here, but we don't have pregos to worry about. They seem to pussy footing around OK. Think snow!

Great idea, and so much simpler than making little boots for everyone. This way you don't have to worry about color and fit and everyone's personal taste in footwear, either.
:)

We use the shavings to make firestarter bricks.

Because we don't have any horsies.

Good thinking, FV. I never had that much ice but man, I did bust my rear a few times. Luckily the horses were smarter than I and never a slip.

Kitty-litter!
I know, kind of expensive. Shavings are a little handier in bulk:)

My solution is even cheaper- get the tractor over to the poop/compost pile, and lay that down around the water trails. They don't mind walking in their own poop and it really sticks well to the ice because of the heat it generates.

Yikes, be careful! I worry about our horses when we've got ice too. We've warmed up and these days they are either on slickery mud, or rock hard frozen muddy uneven ground.

Silly horses thinking the shavings are gonna do them in! My hubby sprinkled a little barn lime when our ice got bad.

Straw works well too, we used to do that when i worked at the dairy cause there was a big puddle in the middle of the pen so we put straw on it and some water to stick it down and worked wonders.

We have had so much warm here it melted all the ice away and we even had water running in the yard. In January!! kinda ridiculous. (not that I am complaining)

That sounds like it should work...smart lady:)I have some of those things you put on your boots too...they work well as long as they stay on which they don't very well. As soon as I go over uneven ground( ie frozen turds etc) they pop off.Somebody needs to come up with a better fit...maybe something that slips right over the whole bottom of your boot...up to the ankle kinda thing.Anyhow hope you and your critters stay standing and safe...no more owies for you please.

We're having to sand all our waterholes here too but the troughs are fine.......yet! We've still got the odd icy patch that requires yaktracks but mostly it's bare.

When it comes down to it, you either get creative and resourceful or you are lost... SOunds like you have found something that works for you, at least for now. I like Shirleys idea though. Even less cost there.

Prego or not, yes they can slip and take a nasty spill. My WB mare did when she was a wee lass in your neck of the woods. Did some damage to her stifle that she still feels the effects of now and then. One of the reasons she has been a broodie all along in life so far.

Don't you just want to create a bedroom for them and let'em in to live out the winter? Water on tap? Food anytime? Just like a cat. The good life.

Cute story, reminds me of my dog and vinyl flooring. She fell once in the kitchen and doesn't like to walk on any parts without carpet. When we go on vacation and take her to her babysitters, we have to take rugs over and they have bought more rugs because they also have wood flooring. So, what we don't do for our animals ;-)

some horse eating variety of footing designed specifically to burn off their little hoofies!
hahahahaa. My horse thinks that of mud puddles yet he likes to play in the stock tank in the summer. Go figure!