That is where I have been the last  couple of days. It was held in Westlock. A bit of a hairy drive  up there and back Friday with the roads still  poor from Wednesdays snow . 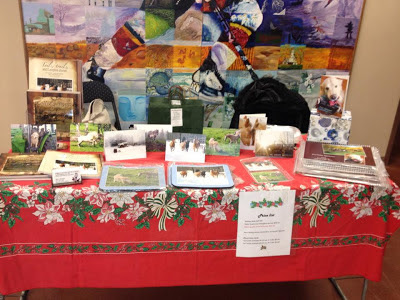 This is my table , I was set up  in front of a wonderful Mural done by the Art Society  there, I felt a little bad because the mural was hard to see with me in front of it, but it is where I was told to go.
I was very careful to place my things well away from it so as not to damage it ,but (in the one  really yucky moment this weekend) a lady took it upon herself to approach and demand I move further out . I explained I could not move much  further without blocking the aisle , and that I was well away from it . She said "well when you weren't here kids were running behind your table and there is not  room for them to  do that." ???? How about we don't have kids running wild around a display???
Anyhow I  agreed to try to move slightly  further, and she grabbed at my table to yank it forward , upsetting several of my cards !
I kept my cool and  calmly advised her I would take care of it . But I have to say , after the nasty roads and all the set up, along with not loving  crowds , I was ready right there and then to pack it in! I almost felt like crying!
A little later the organizer stopped by and said  hello , she was fine with where I was and made no further comment.
Sales were pretty slow this weekend , not  just for me , but for many of the vendors, there was a lot going on for kids and also a hockey tournament so that may have played a role , or  just the weather . Several vendors packed up  early last evening , and also today some left  just after lunch .
My sister came with me today , (so that lady is  lucky she didn't pick on me again! not with my big sis there to defend me!!) Again slow sales but we did have a nice time , spoke to lots of folks and  did a little looking around ourselves . All totaled I sold 3 books and a few cards , and had a nice day. But dang!!! am I tired tonight !
Staying home to  do a few things around here tomorrow , may get a start on my inside decorating , then Martin is home Monday till after Christmas!
Hope everyone had a good weekend
Stay safe and warm my friends
Posted by Sherry Sikstrom at 9:18 pm

Sorry that lady was so rude.
Sometimes people are just schmucks!!

I know it's YOUR blog, but this is my comment and I have to say she was a snotty bitch.

And I love the photo of Winston, I saw that it was on a card in your display. That ought to make just about anyone smile. :)

Vendor shows are hard, and it doesn't help when someone doesn't play nice.

It is a lovely display... That "poor" woman...you just have to feel sorry for that type.
Blessings!
Ann
PS Love the photos in your previous post too! Snow makes everything so pretty (even if it is a bit hard to live with sometimes!)

Some people...your display looks very nice, and your getting your name out, way to go!

I'm with you, why should those kids been allowed to run wild? Gosh that upsets me more than anything! I probably wouldn't have kept my cool with that lady! Sad but true.

Yaaa Marin comin home for Christmas!!! That has to make up for that ladys poor manners, no need for her to be like that!

How much ya wanna bet it was HER kids/grandkids that were running around. OOOOoooh, I'd have given her a piece of my mind.
Welcome to serving the public, I am so sorry that idiot upset you. Grrrrrrrrrrrrrrrrrr.

Let Martin relax you:)
No wonder you're tired!

Hugs, girl, OH, that made me mad when I read that.
Which is why I suck at sales.
You were wise to keep your cool. I'da bludgeoned her.

Thanks for the offer to look at your snow:)
Trouble is, it isn't here, where it would be much more acceptable to Blaze toes, than that ewwy mud.
I think I saw three flakes today.
a Blizzard;)