About 7 or 8  years ago I had a fairly bad wreck . Came off a horse at high speed and when I landed, I landed most of my weight on my left elbow. To add insult to injury , my wrist snapped  back and whacked me in the jaw and then if that wasn't enough the horse  jumped on me. All in all a crappy afternoon!.

I got up, got back on the horse for a few minutes and then headed to Emerg . BECAUSE MY HAND AND ELBOW REALLY HURT and my wrist  was at a funky angle .
Unfortunately I also had a really large swelling and a hoof print on my thigh(wore shorts to the hosp because pant  kinda hurt) SO as much as I argued that I was  concerned about my arm, the doc was petty focused on my leg.Eventually convinced them that I was  hardly likely to have walked in , far less have gotten back on the horse with a broken femur !
So they agreed to X ray the wrist , nothing broken but as it turns out later the impact of my  jaw on my ulna caused enough trauma that I now have a  bone cyst there .Found that out a while back. My elbow has also been giving me trouble for some time , and when I told my new doctor about all of this she sent me for more x rays , as she was concerned there may have been a break that was missed.
The good news is , dropping my entire body weight at speed on my elbow didn't break anything (as the title says ,GOOD BONES )
The bad news is I have severe arthritis in that  joint . So I went in today to have a cortisone injection  to relieve some off  the inflammation and pain. Hurts like a sonovabuck! to get it done , but once the freezing was on board it felt pretty good. A little sore tonight , but I should see results if I am going to in the next few days . 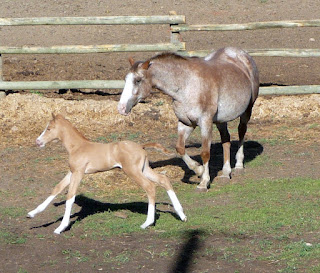 As for the horse that threw me? well things happen and I have to say while I  have long ago stopped riding her . She is non other than

"That Richie mare " Broodmare royalty !
Dam of  such sweet good minded foals as; Classy,Wilder, Phoenix, Justus ,and Quinn
She is better at that job nuff said.
So other than work and doctors appts in has been a quiet week, hopefully will have a new interesting post soon.
Meanwhile , stay warm, and stay safe

Posted by Sherry Sikstrom at 10:05 pm

Oh, what a traumatic experience it was. Thanks for the consolation of giving you those sweet good minded foals. Looking forward to read your new interesting post.

Injuries are not fun!! I have had my share, all from horses. Those silly animals we all love so much! I have had knee surgery (torn ACL and miniscus) which before I had surgery I had a couple cortisone shots. And they sure don't lie about those needles and the pain! I have also injured my neck (disc bulge).
Hope your feeling better soon and glad to here you have good bones!!

owowowowowowowowoOW.
I guess That Ritchie Mare can be forgiven for her bad behaviour, as long as she throws such gorgeous foals.
Hope the shot works!!

Ow!!! I hate those injuries where they just keep hurting long after its over. Sometimes it heals quicker when the bone really does break rather than all those other injuries it causes.
I think you picked a much better career for Richie :)

Holy Hell Woman! Looking back I am pretty sure you thank your stars nothing went any worse than it did. No wreck is ever a good wreck. And some mares are better Mommas than they ever will be Career girls. Hope the injection works and you are back up to snuff soon.

What a nice looking baby, that is.

I had a three quarter Appy mare when I was thirteen. Blue Roan. Loved that mare. Still am partial to appys.

Injuries do tend to catch up with us as we get older. I'm surprised I can still walk at my age! Hope the shot works for you, I've heard good things about them. My mom had them in her hip and she felt great after, although it's not long term.