Welcome to my snow globe

We knew it was coming, but somehow the longer it took the more we were able to dream that it might not.
But in the end , Old man winter never lets us down ! Arrived with a vengeance on Saturday .
But for once I was ready, I had the horse all set up in winter quarters, and the pens ready for the cows. 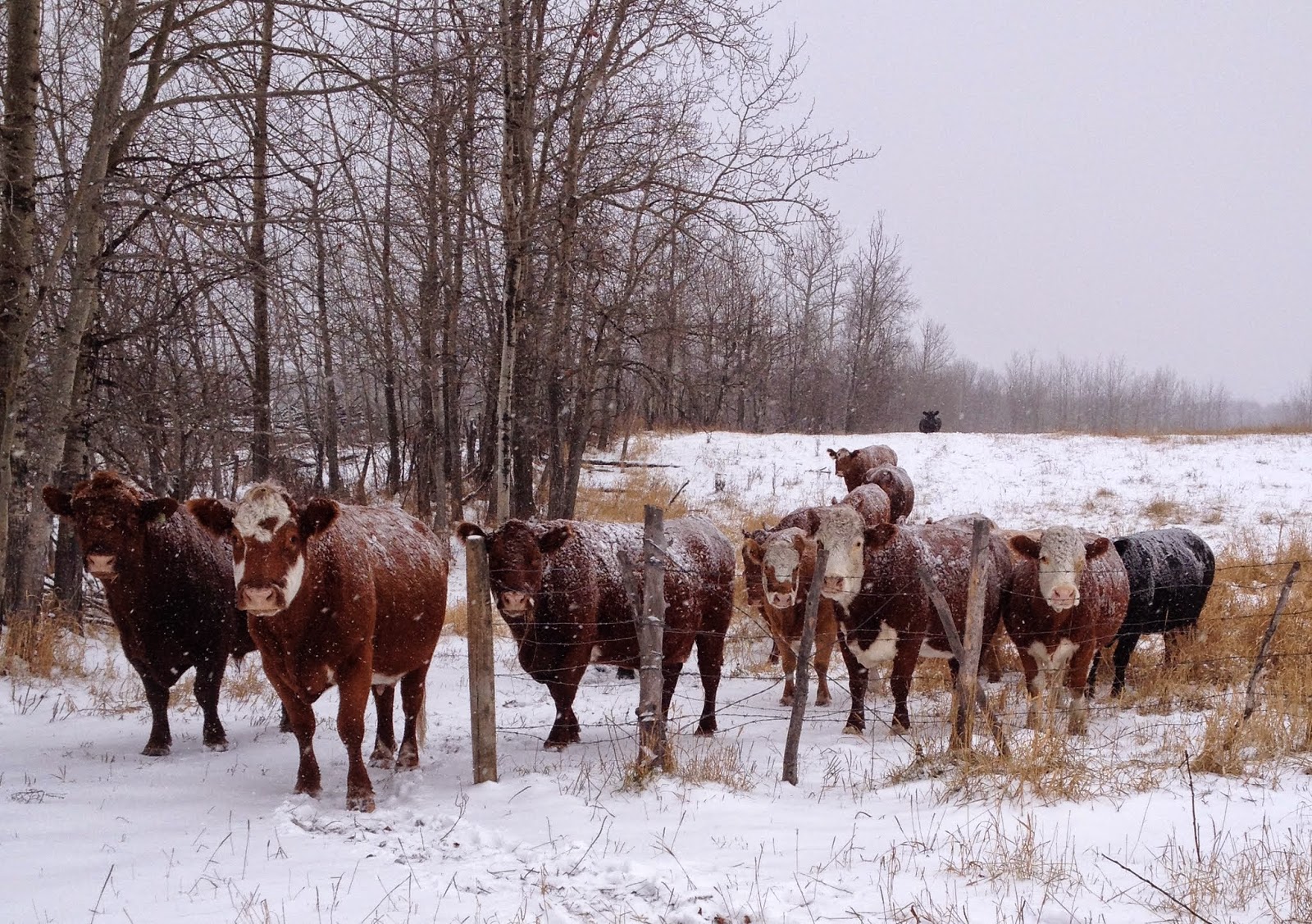 I went out on the gator , to call them in, I should have had video , the cows were more than ready to coma but Bully! well he rivaled California Chrome the speed he came in! He is not even seen in the abocve pic, but shortly after I took it he came out of the bush on the run, passed the cows and me and pretty much met us in the yard! 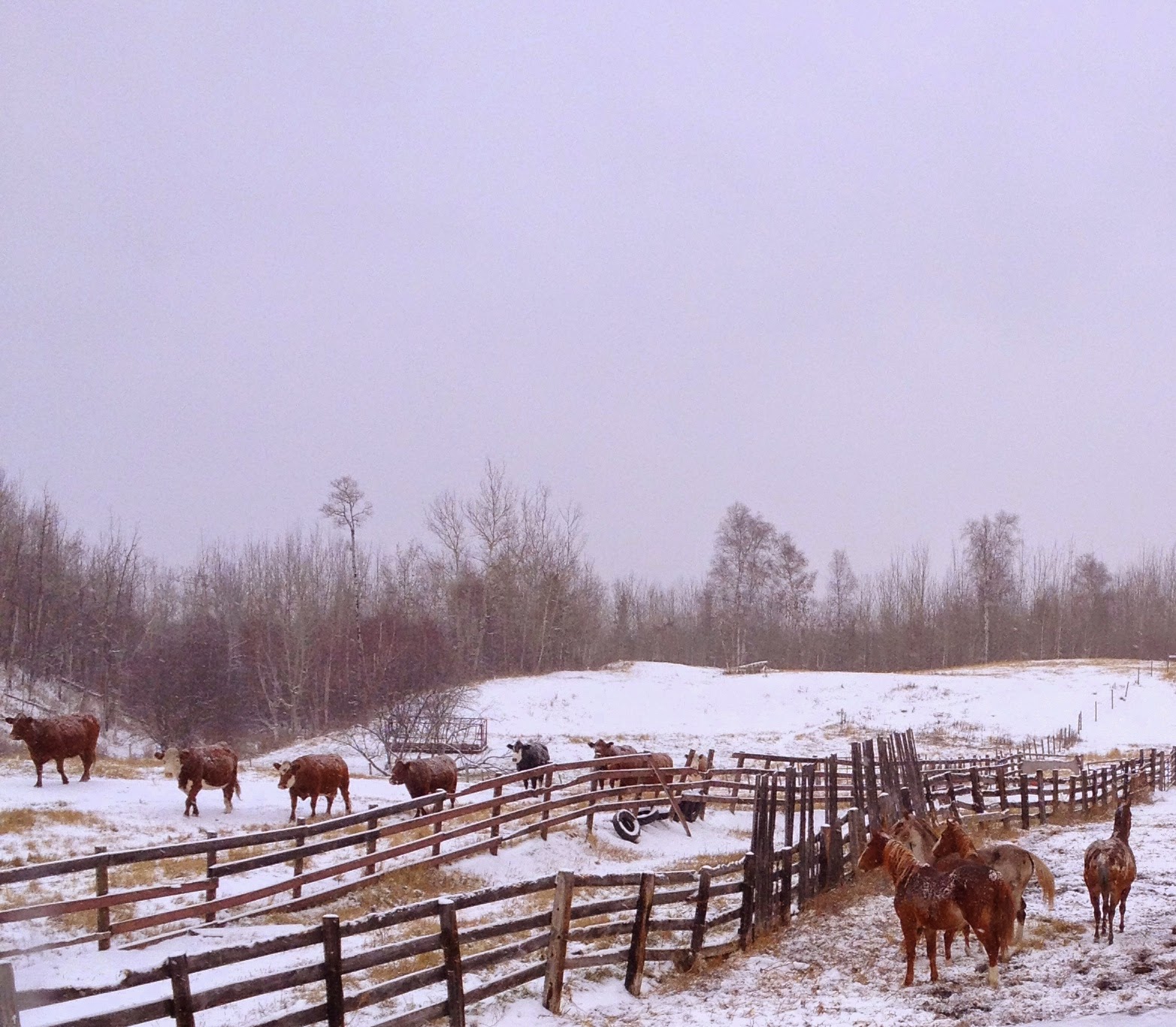 The new girl (who as I type this it occurs to me I haven't yet told you about ) was not too sure about the cows but she and the group she is with settled quickly.
The new mare is named Bright Eyed Beauty, Lacy is her barn name .She is a 9 yr old registered Appaloosa mare who came to me via a friend and fellow appaloosa breeder ,Linda of Starmyri Appaloosas   Lacy belonged to her sister. Linda contacted me in the spring about this mare and initially my response was to decline, but then I saw her, and her pedigree, and well, you don't often get offered horses of that caliber and with the background she has (Linda is a very reputable gal) so I agreed. Her pedigree, suits my program as thought she was bred to be here!
The pictures I have are not great as she was fairly excited as she met the new herd and then once settled I just could not get far enough away from her to get a photo! Another pocket pony offering free horse hugs! 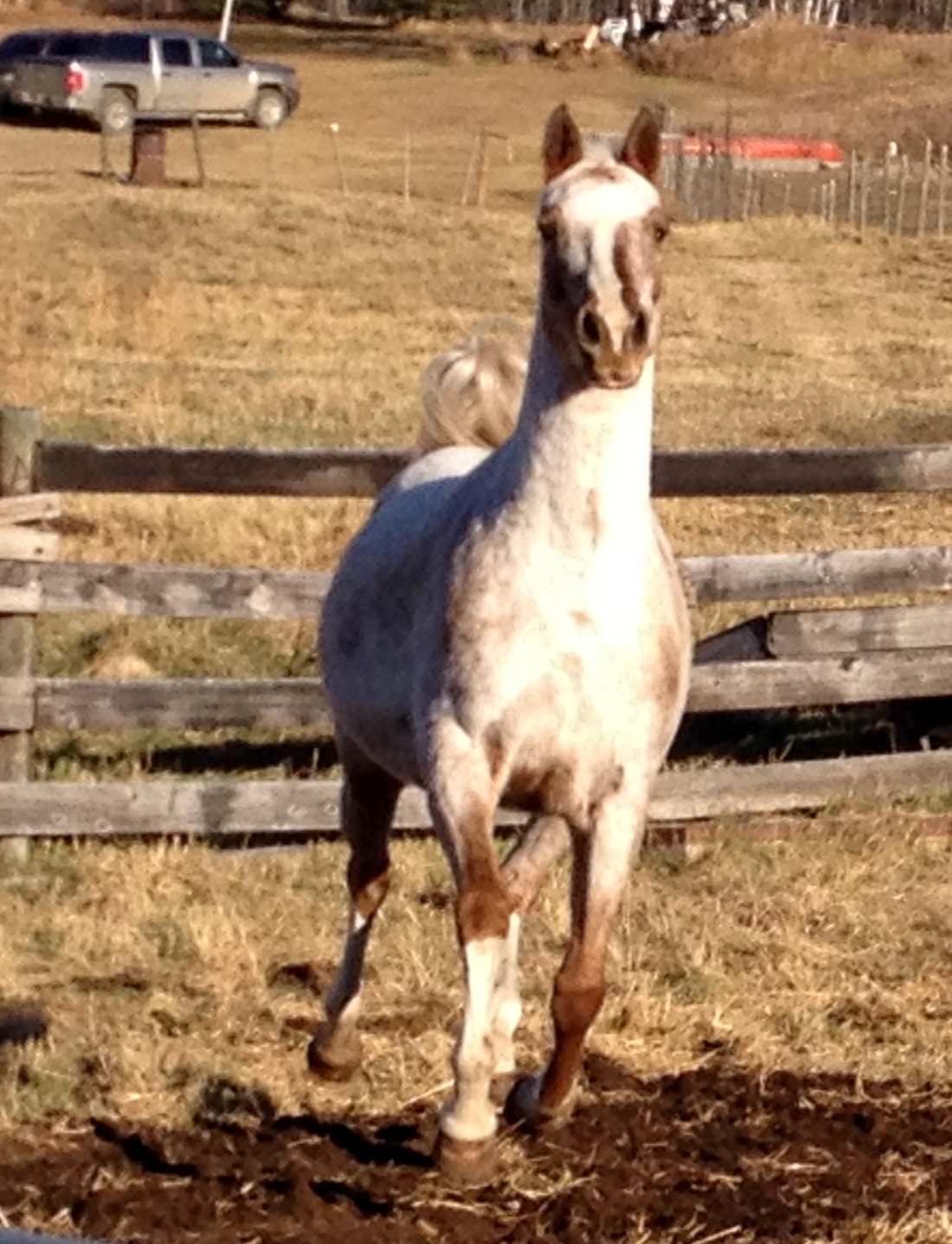 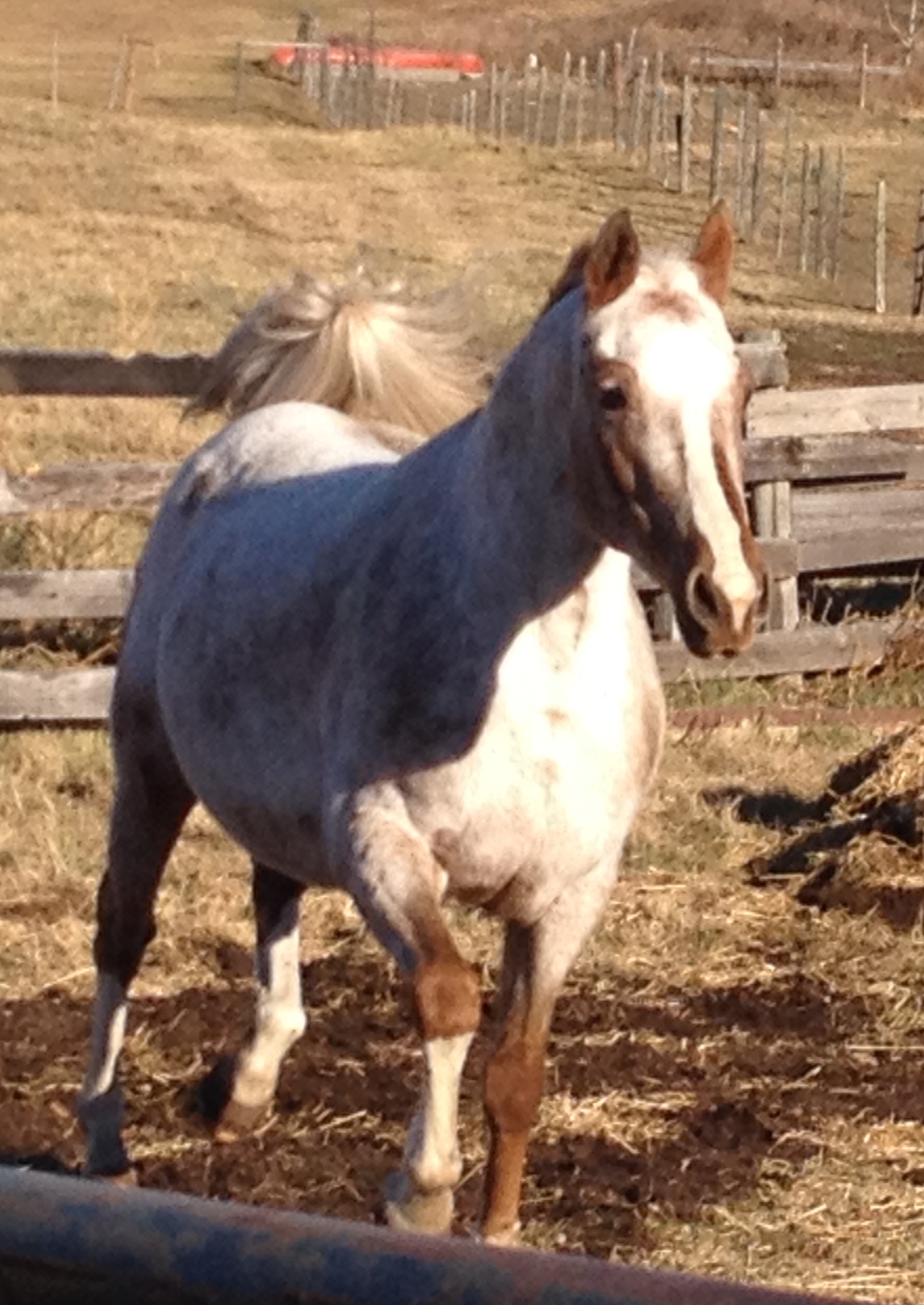 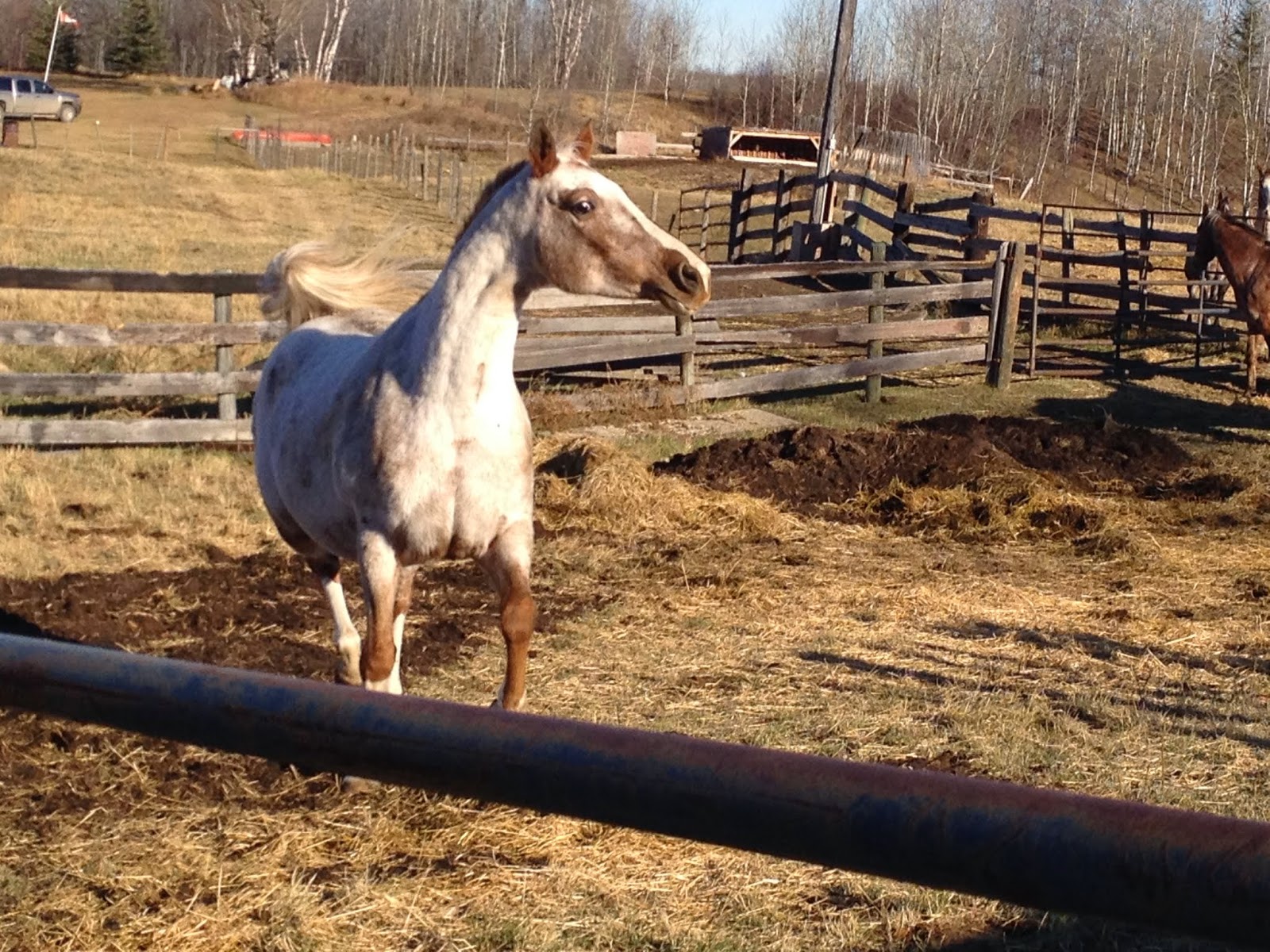 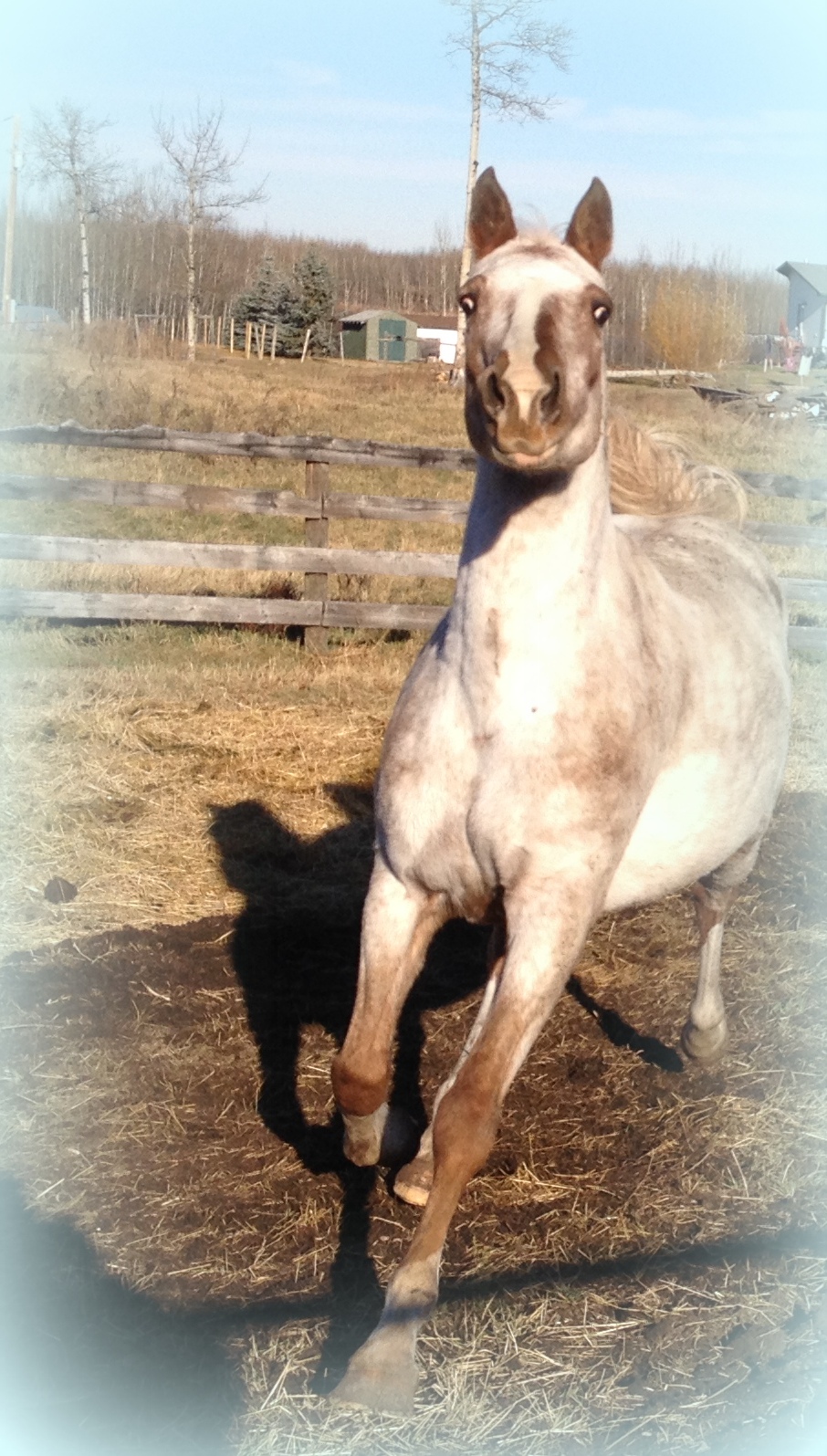 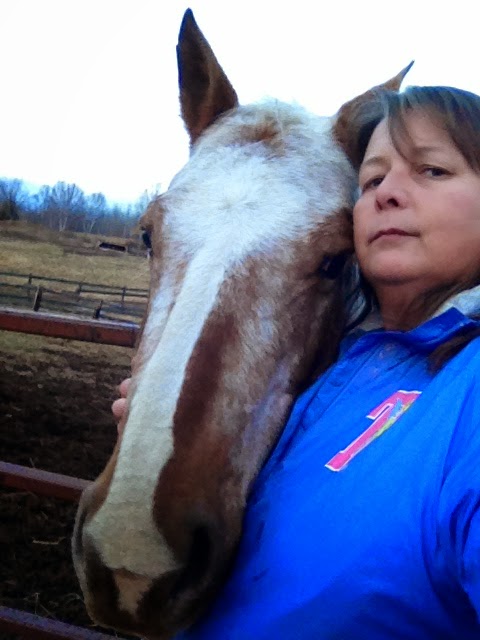 The other group getting warmed up to face the storm ! 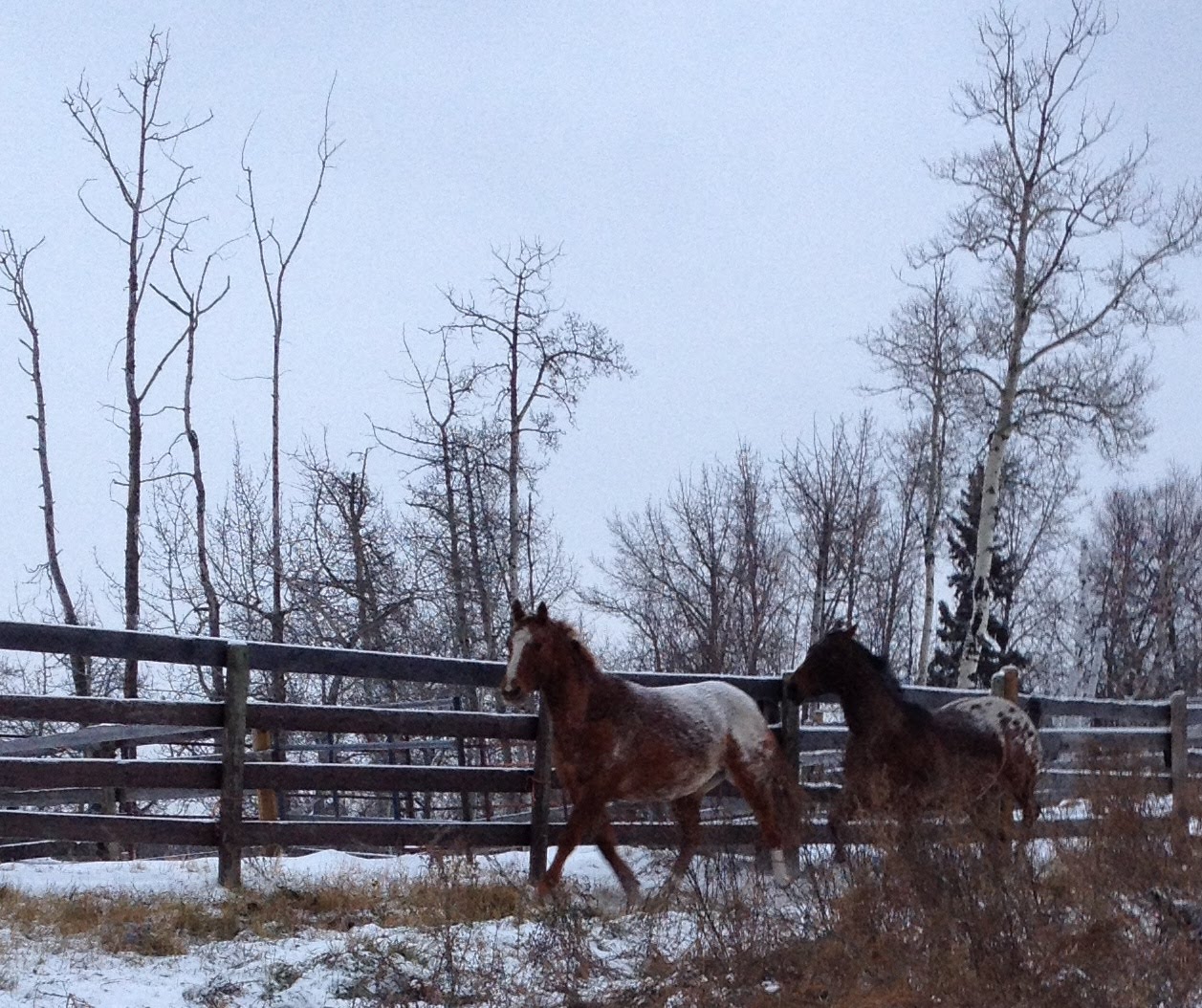 All were pretty revved up 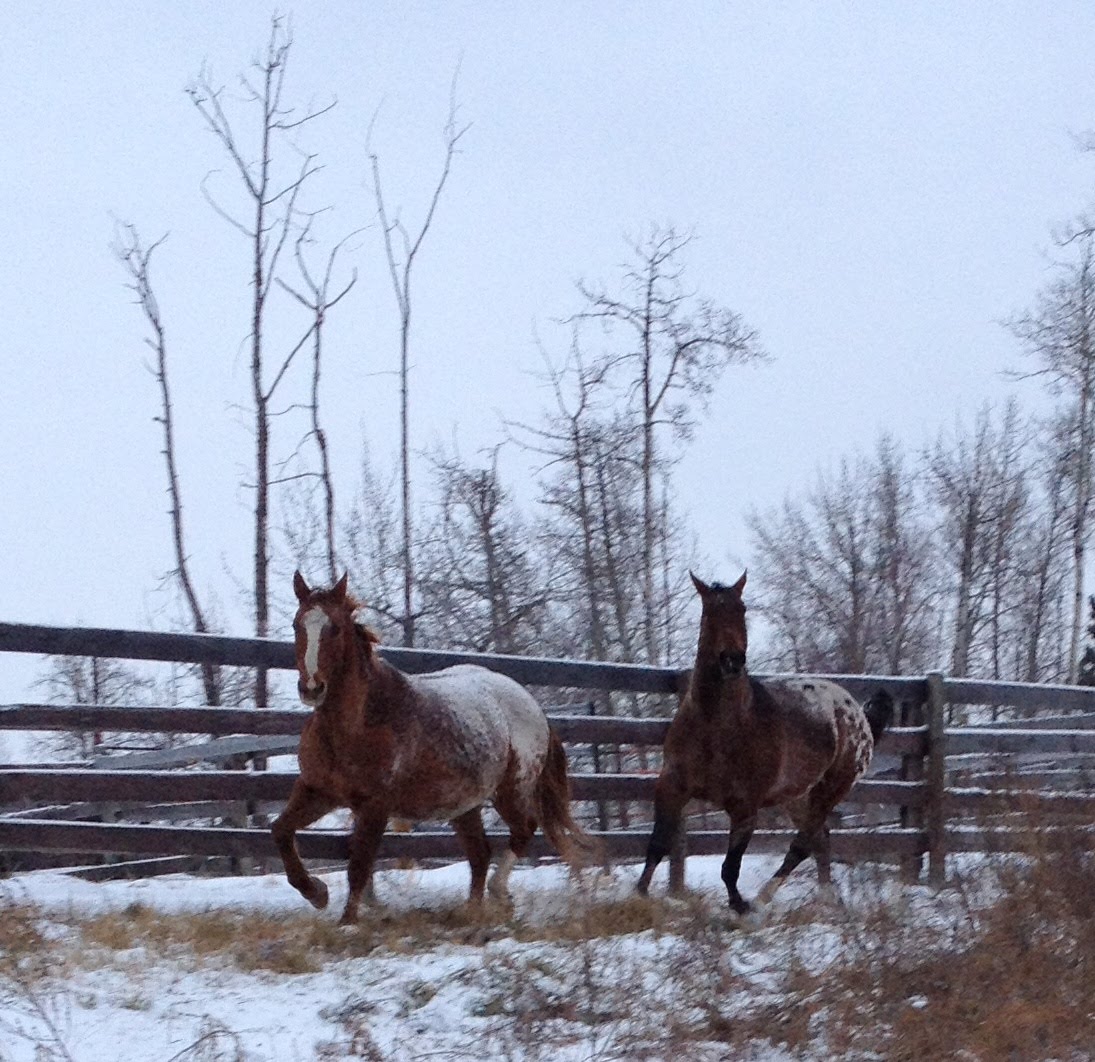 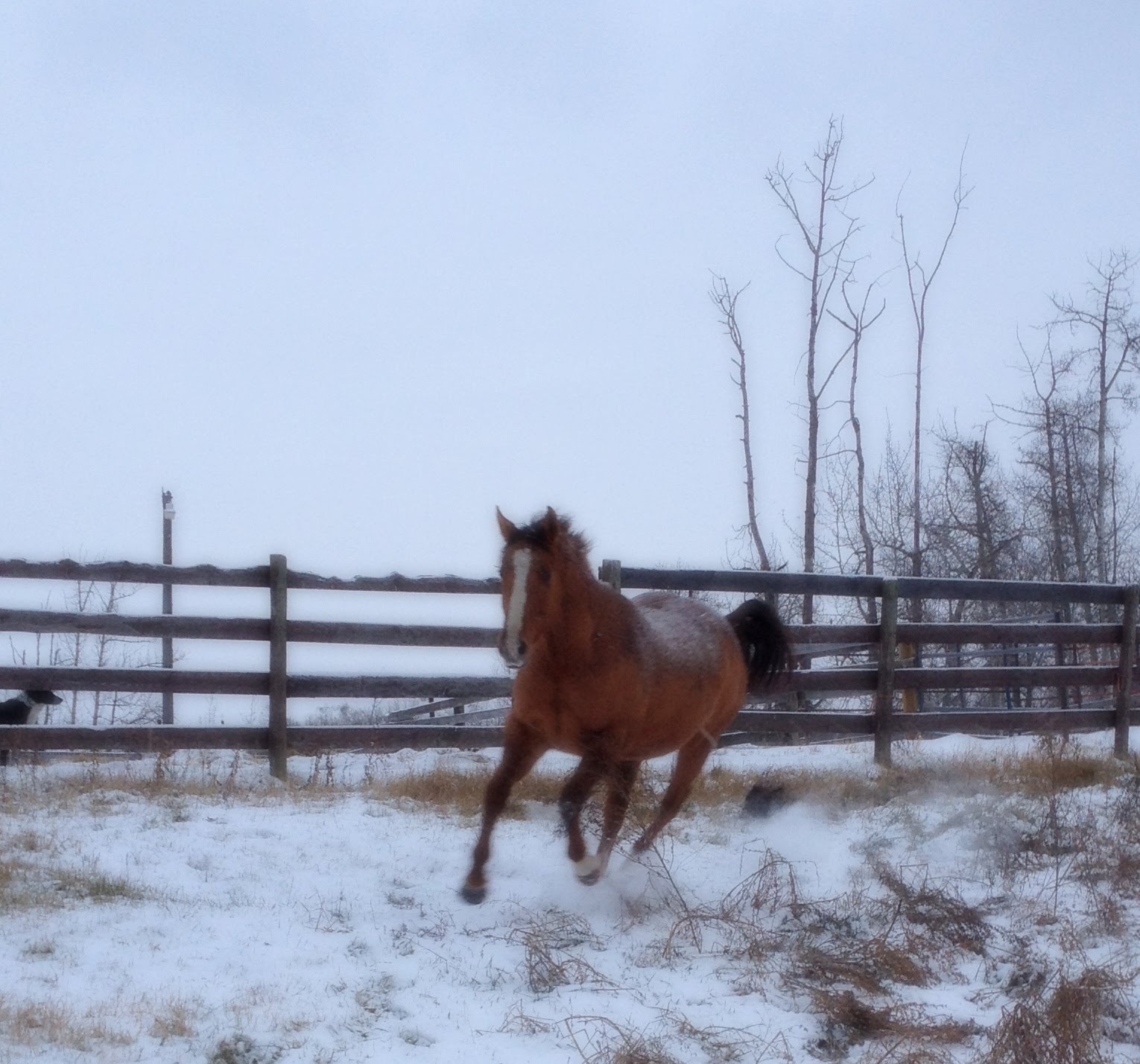 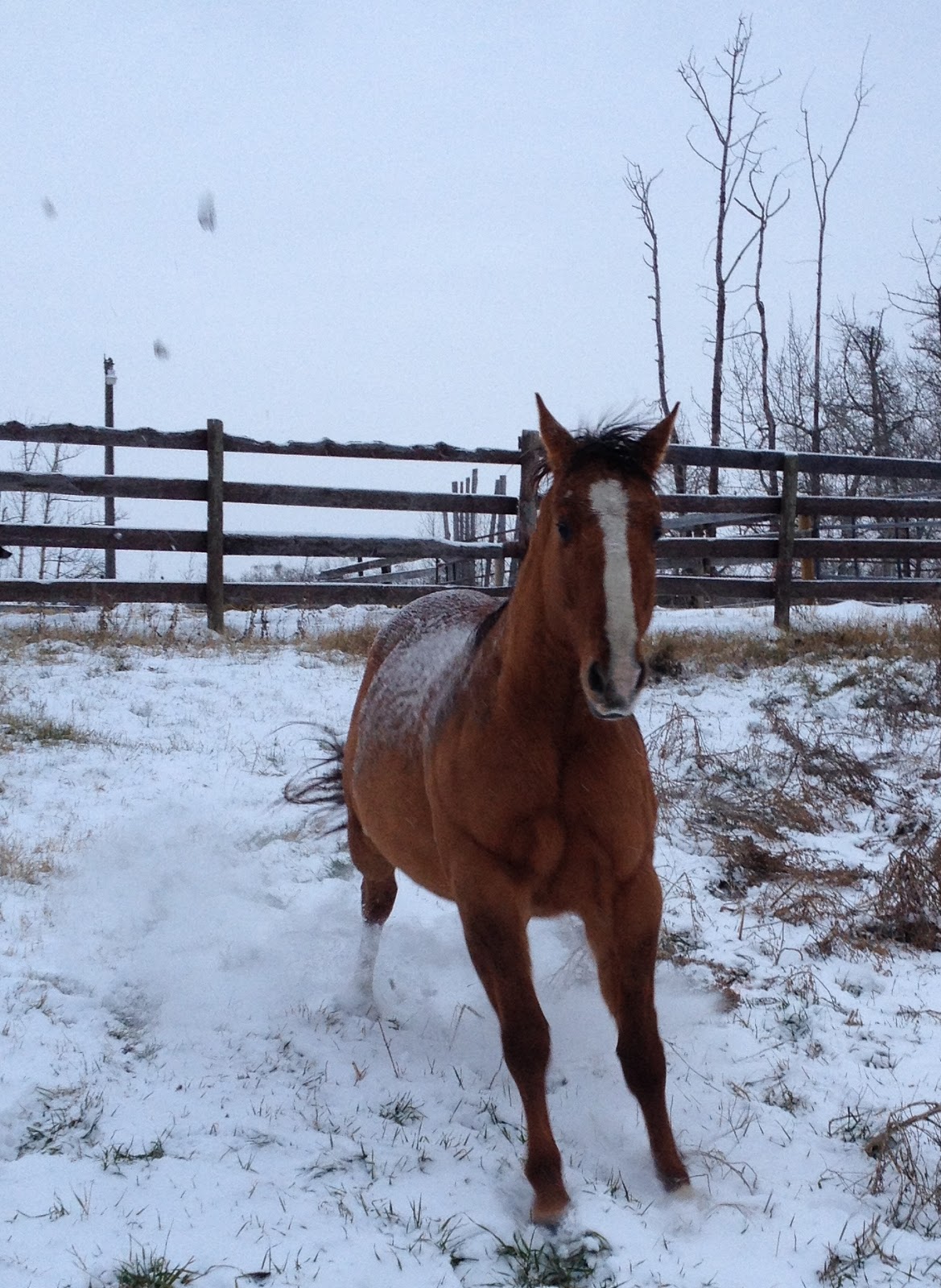 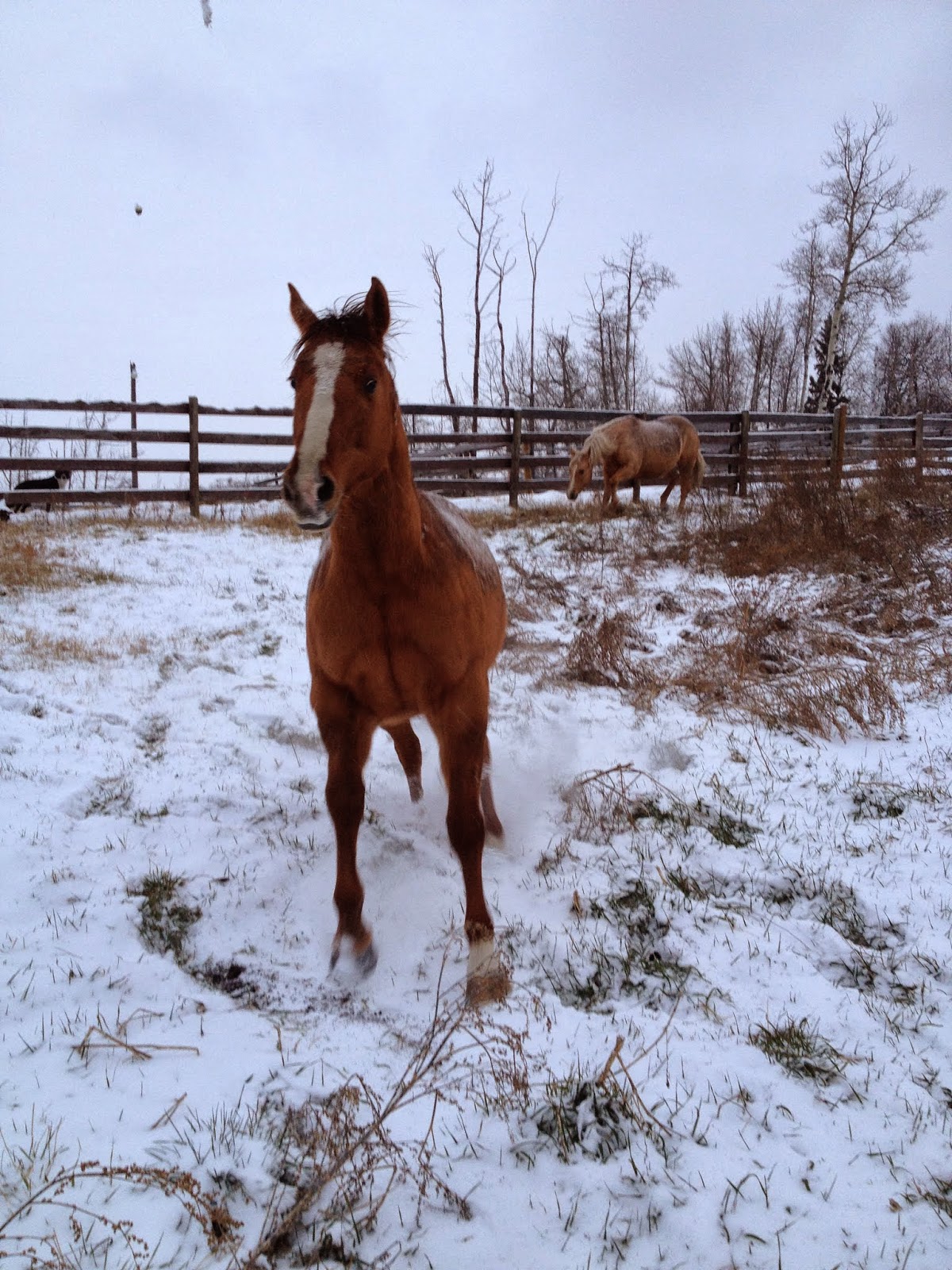 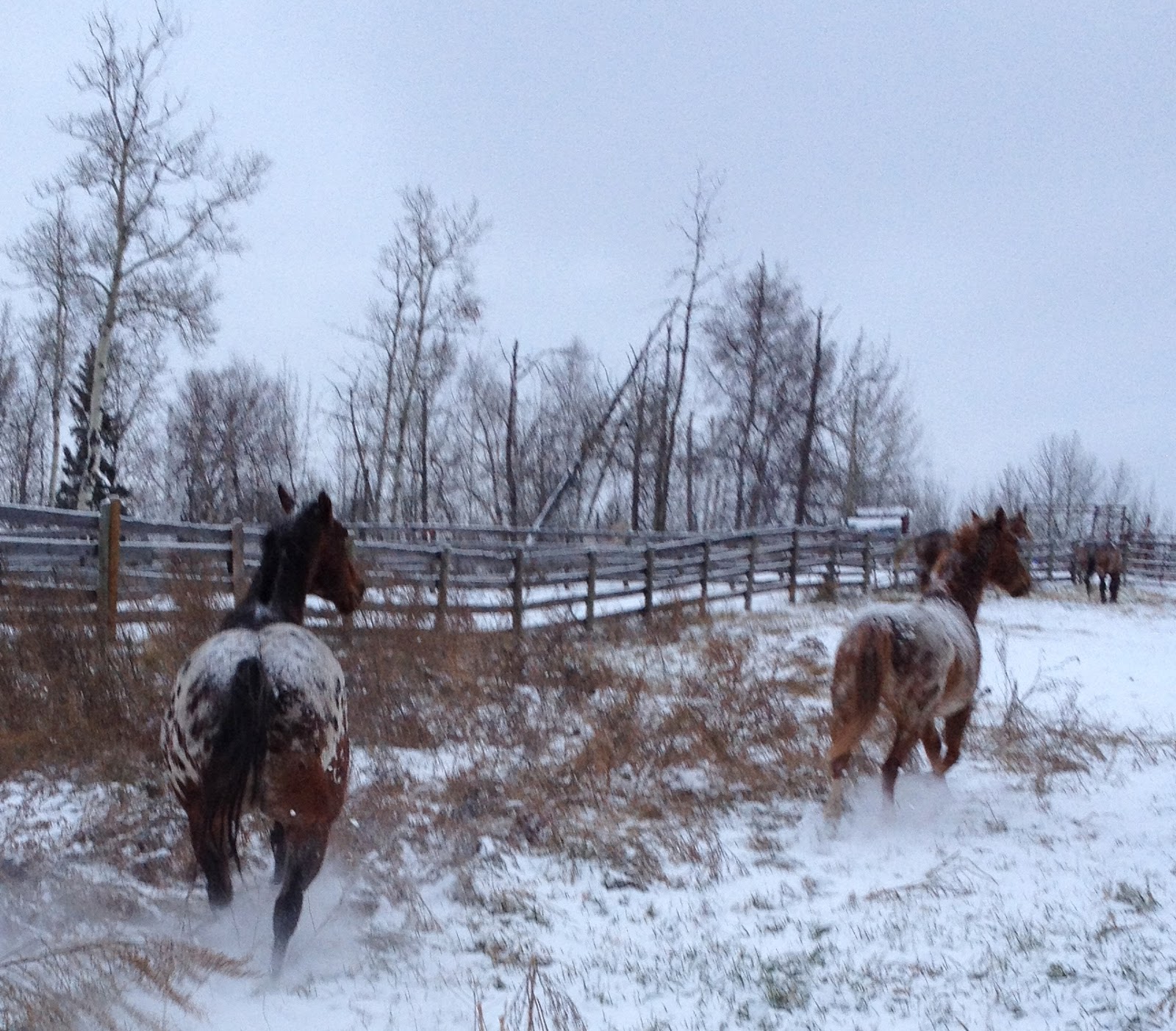 but it makes some pretty pictures 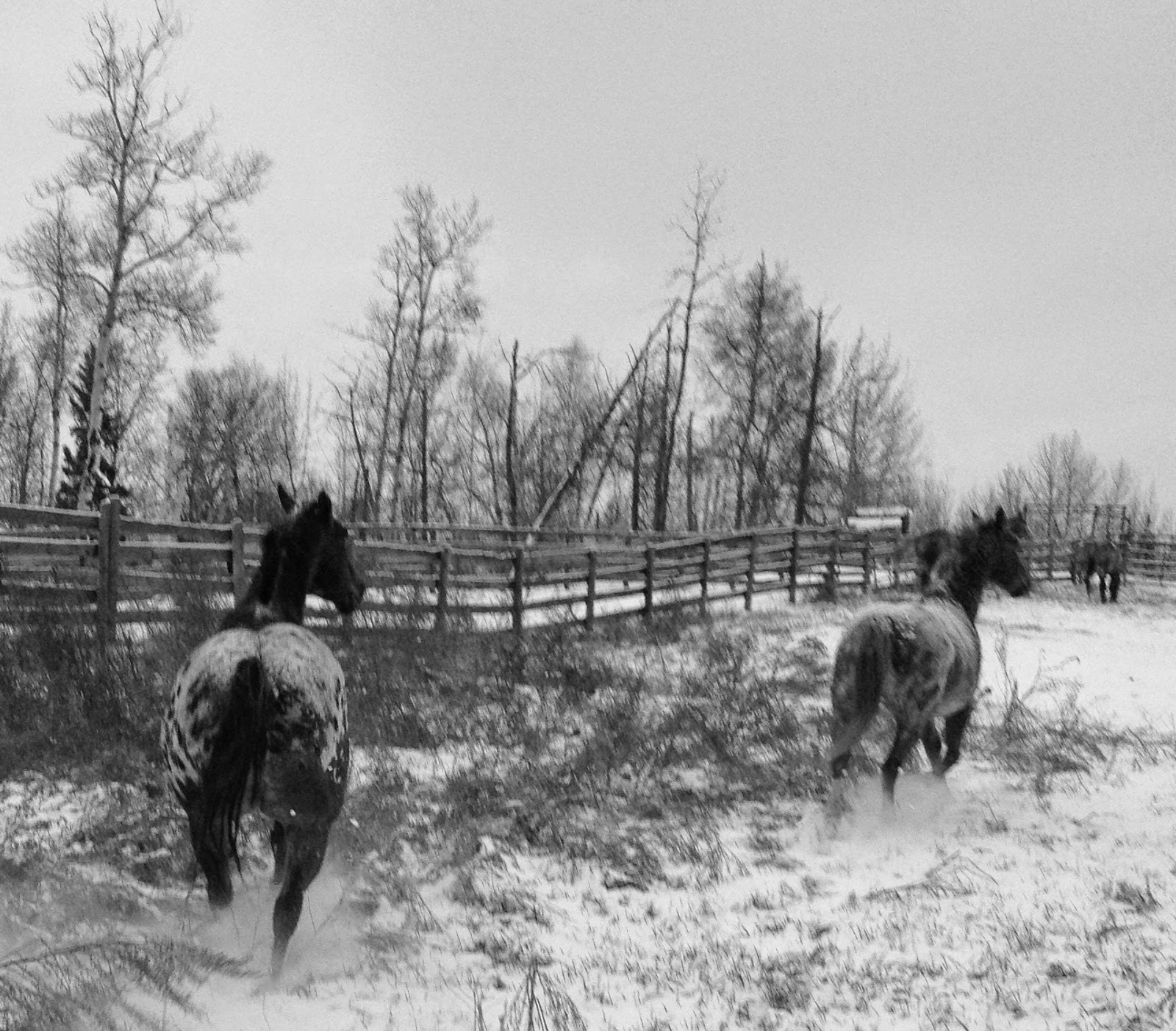 After all the moving and sorting things out it was time to go in and warm up. Hot chocolate with caramel espresso, and Baileys! That will fix you right up! 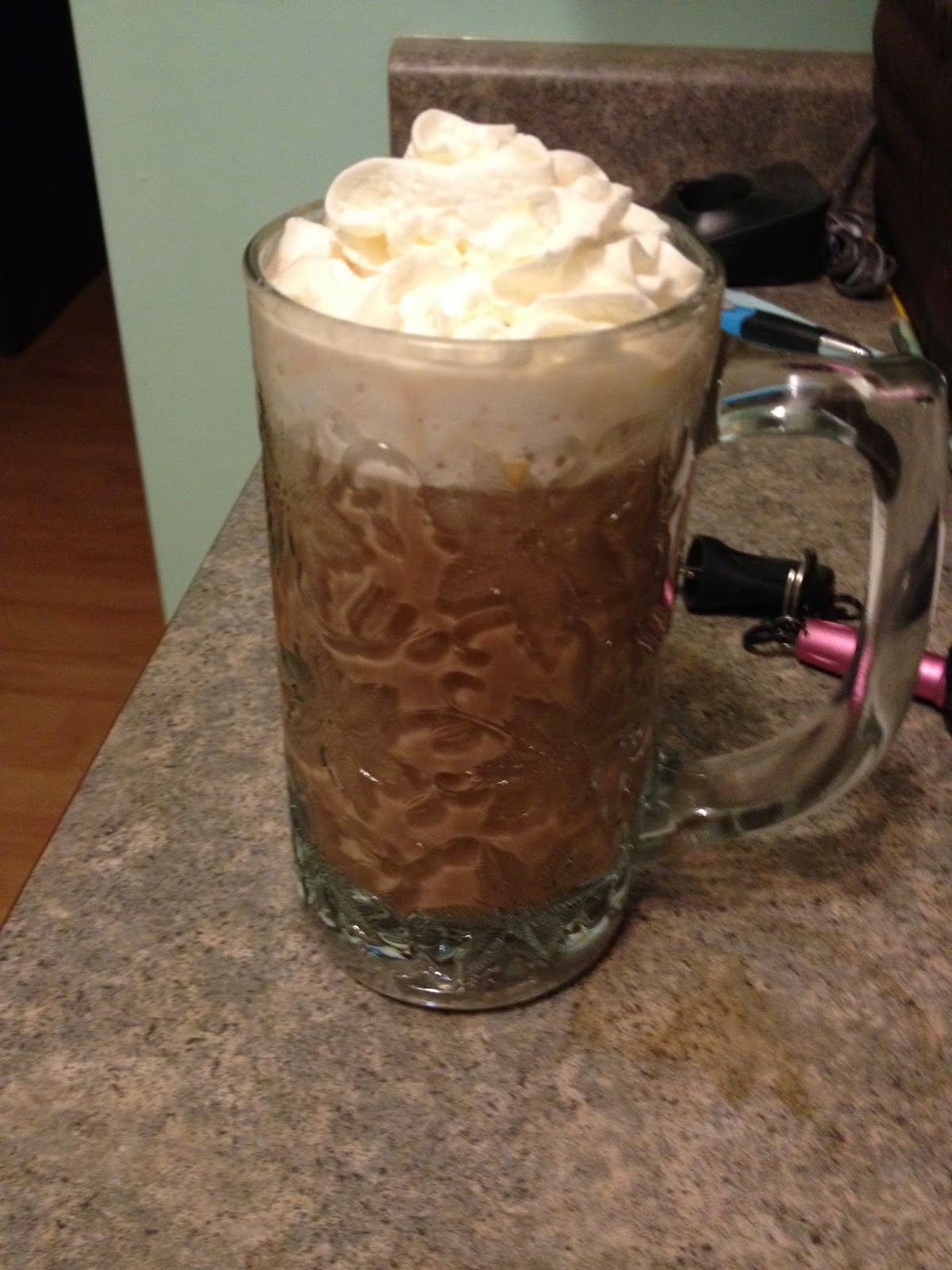 I stayed home Saturday night and for the first time in forever it seemed I was not going to go to the Canadian Finals Rodeo! I have attended since I was a kid. Dad and I were planning to go , but the roads were poor and we decided against it,m sent the tickets along to an honorary niece, Cara,and her boyfriend. I hope they enjoyed it .
But as luck would have it I got a text the next morning from a friend who had a spare ticket to the Final ! I didn't even have to drive far, met her halfway and her hubby drove! Yay for second chances!
Pictures are difficult at best and on a cell phone more so, but this snappy chestnut caught my eye 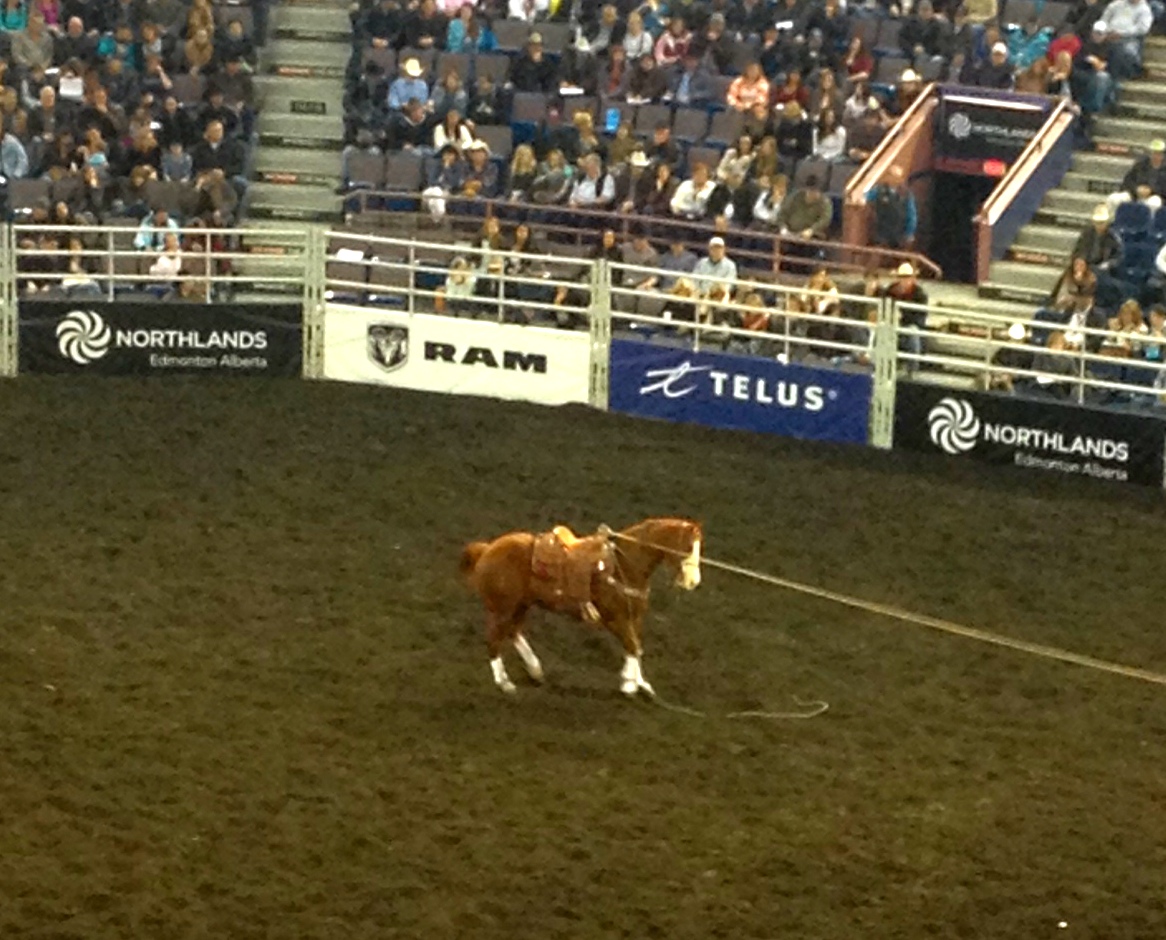 Put me in mind of this guy. Though Badger was a bigger horse and had one less stocking. 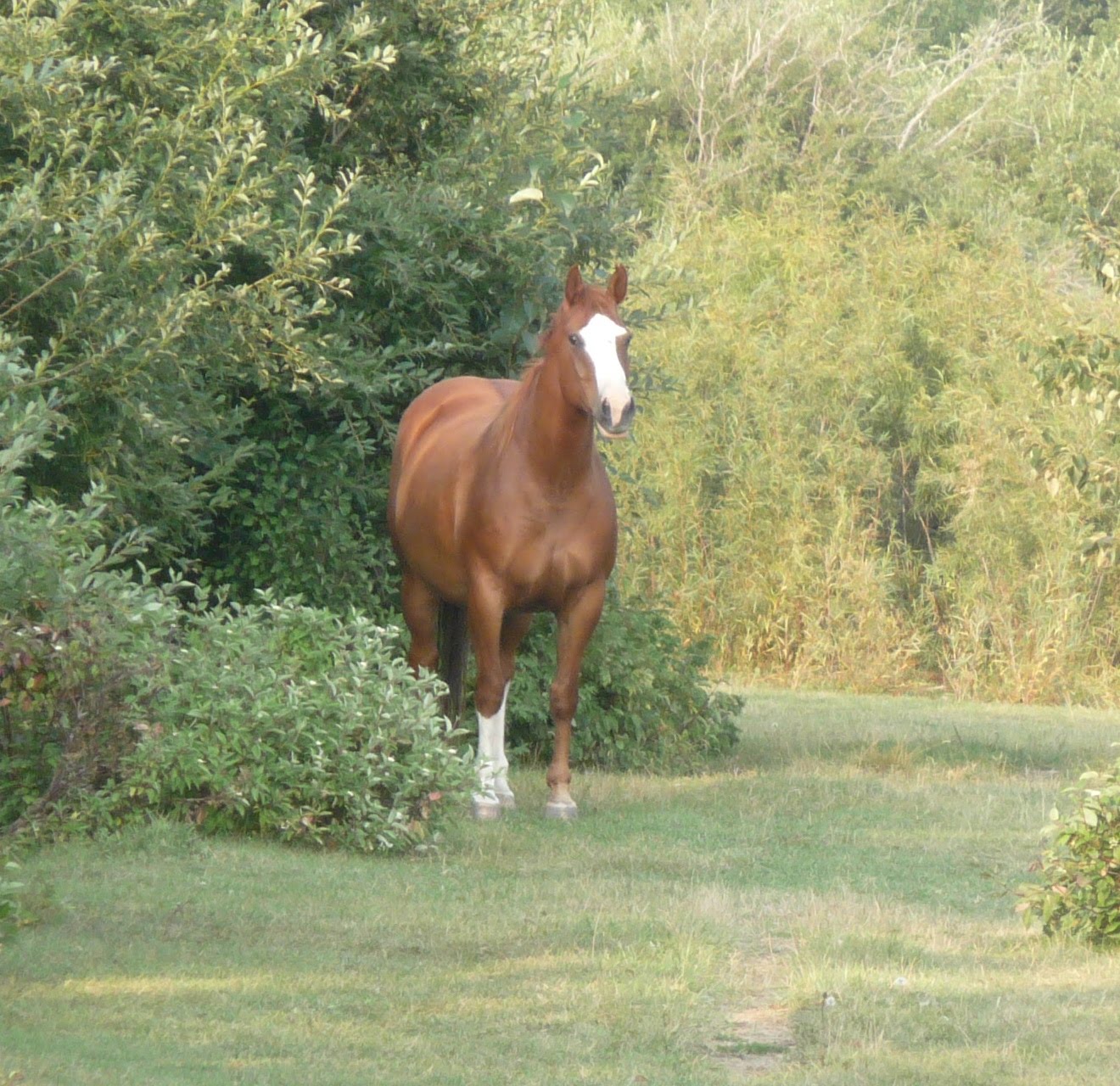 Anyhow that is the goings one currently her at Fern Valley. So again welcome to my snow globe! and the Winter of 2014/15 ! Lets hope its a short one! 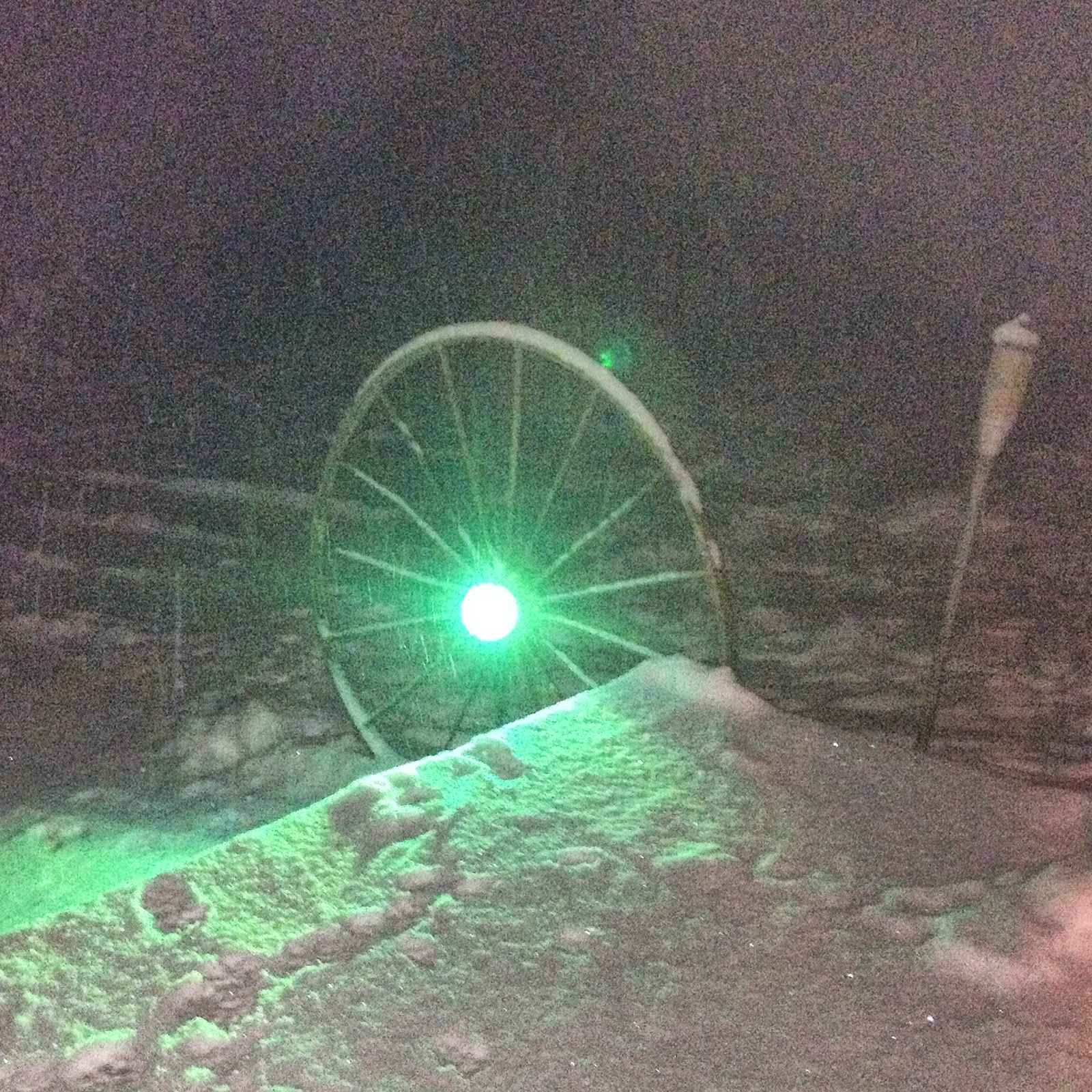 As always , stay safe my friends, and now I will add, stay warm!
Posted by Sherry Sikstrom at 11:48 pm

We're going to have a couple of cold days then snow in the forecast; ready or not.....

Congrats on your new Appy, does looks like she fits right in. Wow, look at that hot chocolate ~ yum!!

I guess I'll have to wait for the tv coverage of the CFR. Wish they would have had free live streaming.
You can keep that snow up there, thanks very much! It does make good camouflage for the horses though. Miss Lacy is a beauty! A Fix baby for her, perhaps?

She's a beauty. Your horses sure blend into the snow. It's a little cool here.We are already getting down to -16......way too soon for me. You stay warm too.