"work with the horse you have now" or the situation

Maybe a bit of a ramble again but I think it might be interesting;

I was working with one of my young clients the other day, one of the issues as a child in a home with foster and adoptive members, are struggles with acceptance of change and the dynamic in the home. Add to that the client  was not feeling great, and it was cold I wasn't sure how much we would accomplish , so instead of a specific "plan " we just went for a walk. I had  just moved the horses around, making room in a small herd for my new mare "Lacy".
In one pen we had Cat, Andee,Johnny, and added Jewel ,Ici and Richie. Johnny thought he was the mega boss and was about to take on Richie's little band with guns ablaze!
Those of you who have read the blog for some time, know Richie is the ultimate boss mare I write about  that here , and well essentially she handed Johnny his own ass! LOL
Johnny is not stupid, so he took his smack down then began to work for  his position as second in command. Respectful of Rich but maintaining his authority with the others, if he went too far, Richie took him down a peg and so it went, the whole integration took less than 10 min. Now that is some leadership Richie! 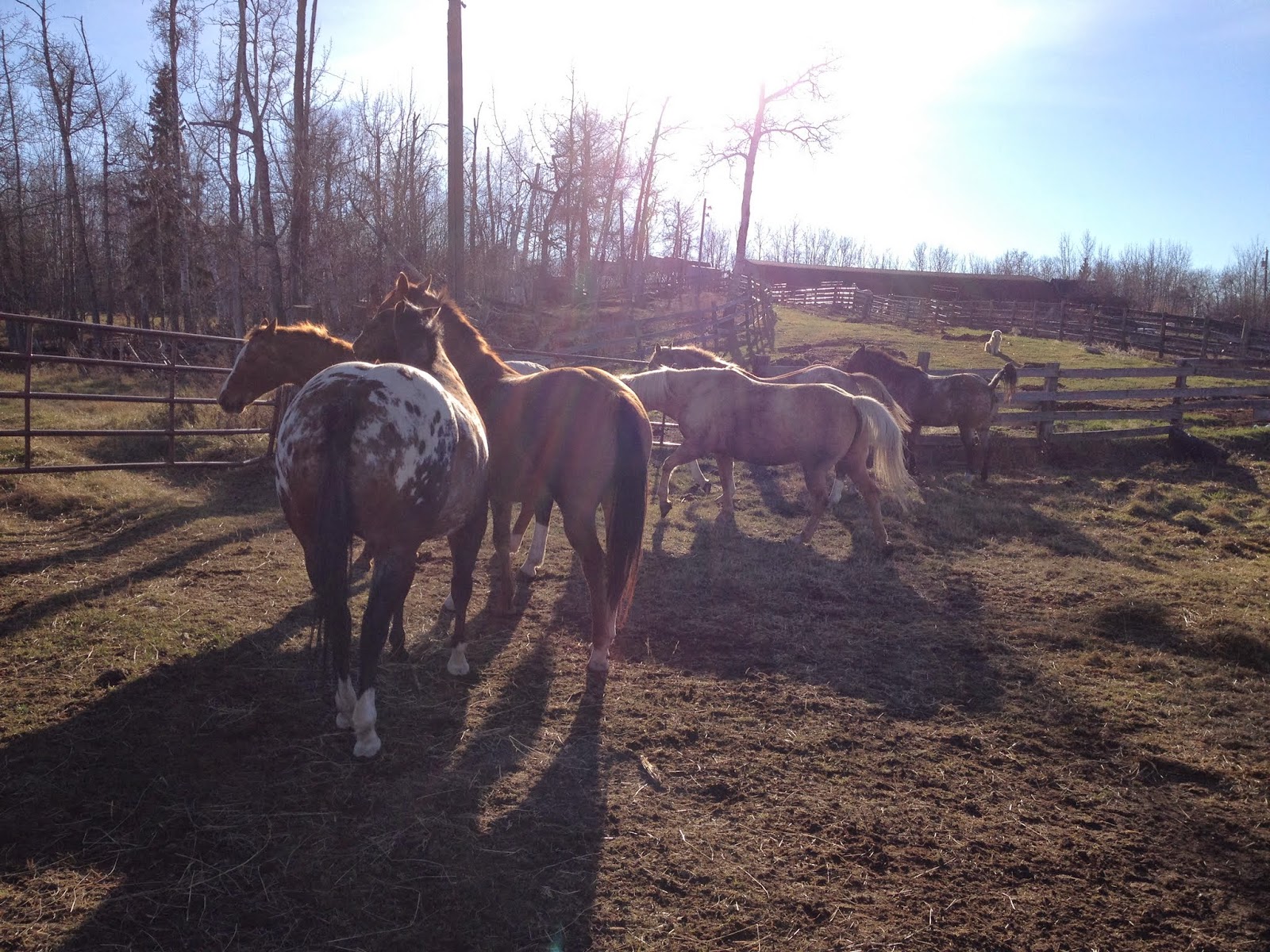 the two groups , together but separate 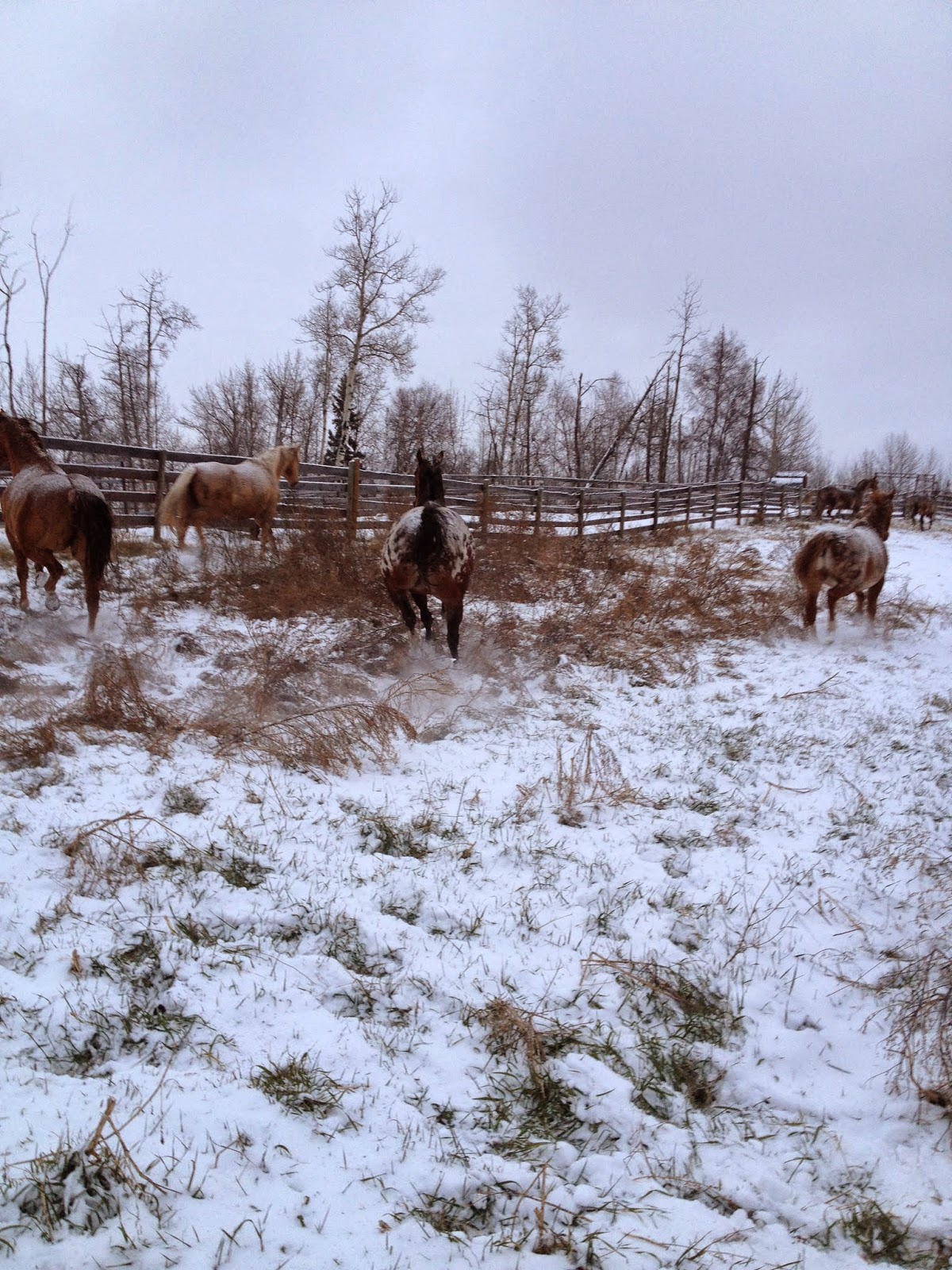 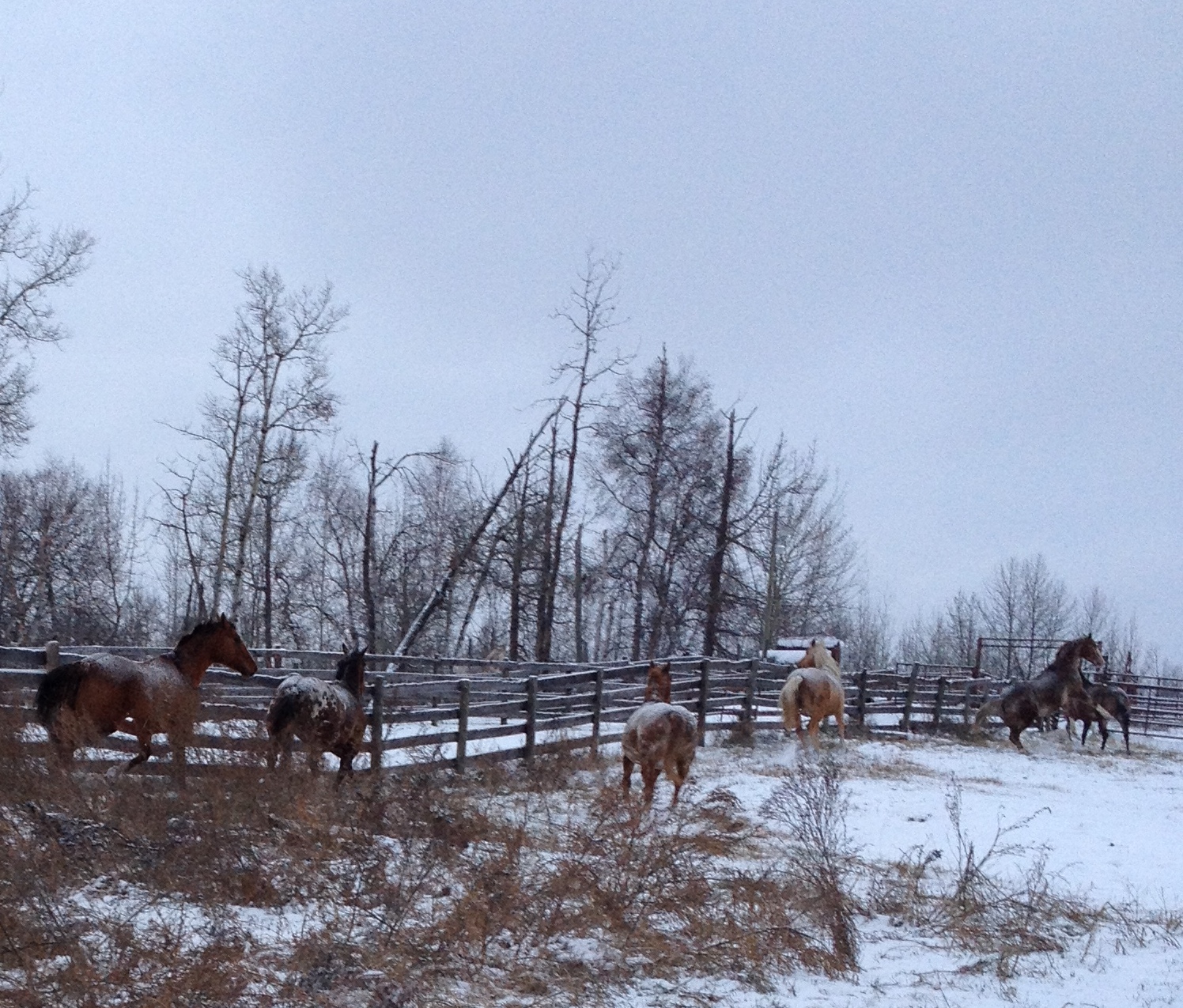 By the time my client arrived, that was settled, but a couple things had changed. New horses in and Annie was no longer in with that group. Cat (Whoa Dammit) was struggling with that change, missing her friend and simply not a girl who accepts change well. She was leaning over the gate, calling her friend and very agitated, I was talking with my client and gently stroking Cats face, when I did that she settled  with the sense of the familiar ,but as soon as I stopped she became a  bit more anxious. Compared that situation  to my clients home and asked if she understood how Cat might be feeling? A huge YES in response , so we talked a little about how we might help Cat settle herself, and that little gal got right into it talking with Cat about change, stroking her face and just gently being with her . Then the light dawned for the client and the words continued to pour out.
We then moved over to Stryker and Harley ,while walking we talked about a younger sibling, new to the home  and how irritating he was to her. So I asked what irritates you ? she replied , he copies me, and follows me around , and tries to be with me and , and ,and ...
Fair enough, so as we walked over to the other pen we saw Stryker (boss of that group) moving the new mares Annie was new to that pen around , and Harley standing near but behind  and watching . Annie was letting the new girl close ,but not too close , and of course the new girl was on her own. Stood and watched a while as each horse took a time to check the other out. Harley was not aggressive but mirroring Stryker, The new mare Lacy was approaching ,in a submissive manner and also mirroring Annie, maintaining some distance but staying in the vicinity. We talked about the mirroring behaviour,I asked her if that looked familiar? she agreed yes, then I asked why she thought the mare was doing that? her answer  "to try to fit in?" and before I could lead her to it, she said "Oh I get it ! that's what X is trying to do at home ! " Sometimes the moment happens all on its own.
Moving forward on that  path we then talked about some of the behaviours we saw in this nice quiet group, that might translate for her and her family interactions. Will be seeing her again next week, hoping she was able to try putting some of that into practice.

I wanted to share this, just because as much as we plan sometimes I think the moment creates itself , and you need to go with it !
Posted by Sherry Sikstrom at 4:27 pm

Very nice stuff - how powerful observing horses is, particularly for someone like your client who is so observant. You are blessed to be doing such work.

It's got to be awesome to not have to plan every session, but go with the flow and see where it takes you.

Having you and the horses in this clients life is a big help to them and to you as you all benefit from each other ! Lovely thing you are doing for this youngster ! Thanks for sharing . lovely photos , Have a good week !

Herd dynamics are so interesting! It's nothing short of wonderful how the session turned out. I am loving your equine assist posts & the good that flourishes!!

Well darn it Sherry that made my eyes leak a little! Great post.

Great story; the way you handle horses...and people is admirable.

It's funny how so many things in the horse life, apply to things in our own lives. I bet this will be something that the client remembers for a long, long time. Hugs and grins to you both.

Right on Sherry - "and that's how we roll in the Shire"!!

How wonderful that you got to share that experience with her. That is probably something that will stay with her for the rest of her life.